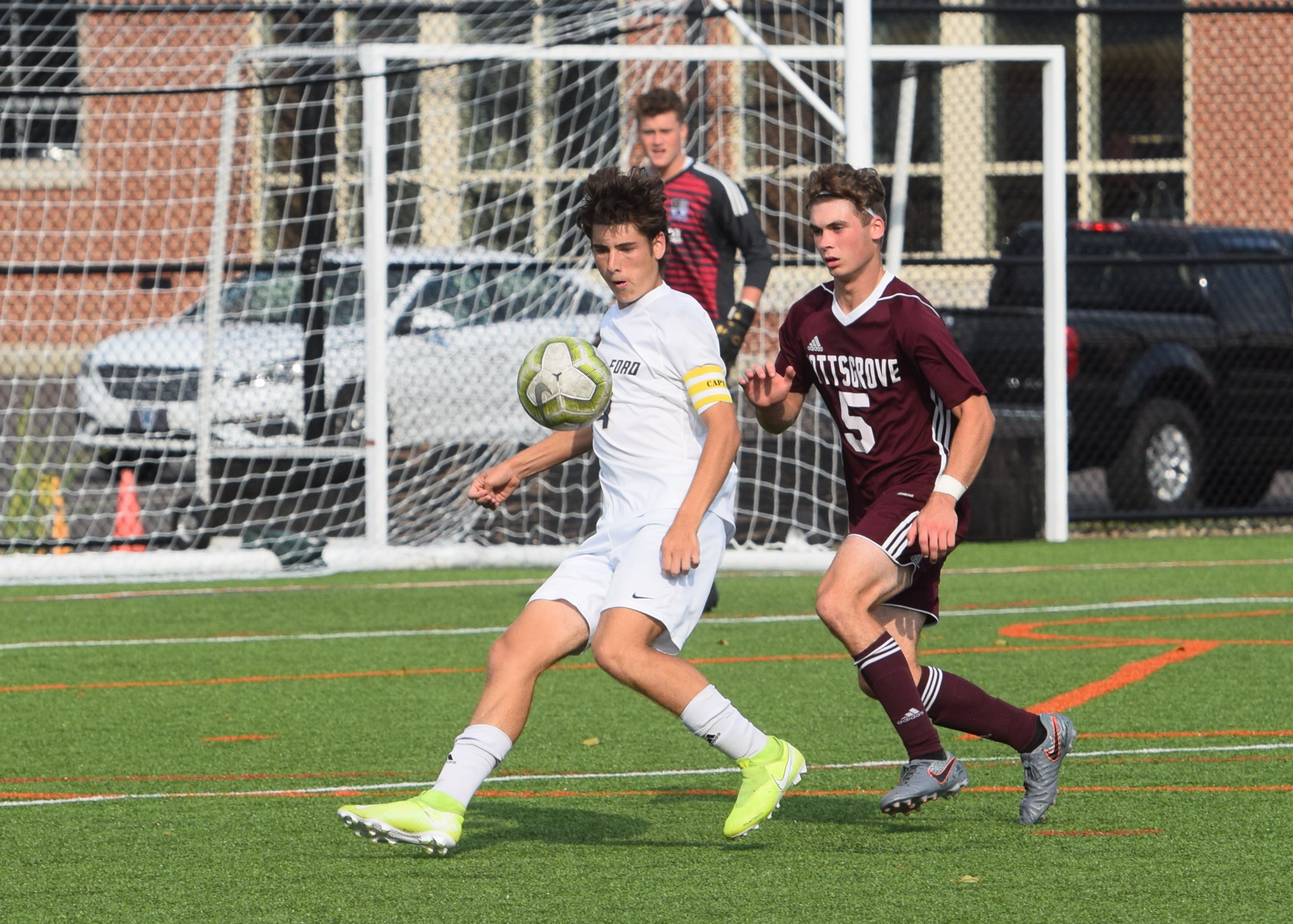 In a battle between last year’s Pioneer Athletic Conference division champions, Colin Trainor struck twice for Spring-Ford and the Rams went on to a 2-1 victory over host Pottsgrove Tuesday afternoon.

Trainor was set up by Tommy Bodenschatz on the opener in the 15th minute while he hit the game-winner by getting a touch on an end-line cross by Brandon Duke in the 39th minute.

Pottsgrove’s Ryan Curnew leveled the match on a shot from distance in the 22nd minute to make it 1-1.

“I liked our possession and how we played and handled that defense pushing back on us,” Trainor said. “I think we’re playing really well, connecting and possessing well and doing exactly what we’re practicing.”

With Duke, Trainor and Brett Gulati leading the line, Spring-Ford controlled the match in the second half, forcing Pottsgrove back and creating the bulk of the chances. The Falcons weren’t without opportunities, Landon Shivak forcing S-F keeper Tommy McPoyle (eight saves) into a diving save to his right midway through the half counting as Grove’s best chance. Meanwhile, Pottsgrove goalkeeper Luke Kaiser (seven saves) commanded his area well and got good support from backs Justin Collings, Collin Deckert, Shane Gleason and Cooper Fiore in keeping Spring-Ford to only two goals.

Spring-Ford improved to 4-0 in the early going, off to a fine start considering the high expectations it carries after finishing third in District 1 last year and reaching the PIAA 4A Championships. But with a strong group of returning players led by captains Duke, Gulati and Trainor and midfield standout Ethan Mossip, the Rams aren’t getting ahead of themselves.

“Our goals are to win the Liberty Division four times in a row, hopefully (reach the) PAC championship again – this time with a different outcome – and keep a good level of play and good relationship with the boys.”

Pottsgrove fell to 2-1-1 but is 2-0 in the PAC Frontier after a pair of one-sided wins over Pottstown and Pope John Paul II last week. On Thursday, the Falcons got a shot at Upper Perkiomen, the team that knocked them out of last year’s District 1-3A playoffs in a upset loss via penalty kicks.

Spring-Ford heads to Boyertown Thursday for a matchup with the Bears on the lush field of Memorial Stadium.

Owen J. Roberts 9, Pottstown 0 >> The Wildcats were led by underclassmen Joey Kish and Ethan Williams in their impressive showing against PAC rival Pottstown on Tuesday. Kish found the back of the net once to pair with his three assists, and Williams finished the night with two goals. The other goal scorers for Owen J. were  Ryan Angelo, Stephen Mullen, Aidan Kollar, Andrew Chirstoforou, and Rory O’Dwyer.

Methacton 2, Phoenixville 0 >> A pair of second-half goals enabled the Warriors to break out of a deadlock with the Phantoms and claim victory in this PAC divisional crossover game Tuesday.

Andrew Kacala converted a pass from Parker Stevenson, while Brett Eberly added an unassisted tally. Tyler Andorn needed to make just three saves in goal to record the clean sheet while Gavin Perillo had a six-save game for Phoenixville.

Boyertown 6, Upper Perkiomen 0 >> Six Bears found the back of the net in the PAC crossover win.

Matt Kerr, Ryan Foskey and Landon Wenger scored in the first half before Dimitri Randjelovic, Nick Willson and Tyler Seidel added goals in the second half for Boyertown. Siedel, Jacob Groff, Andrew Benning and Noah Barnes tallied assists, and Mason Kurtz and Tanner McCafferty split halves for the clean sheet.