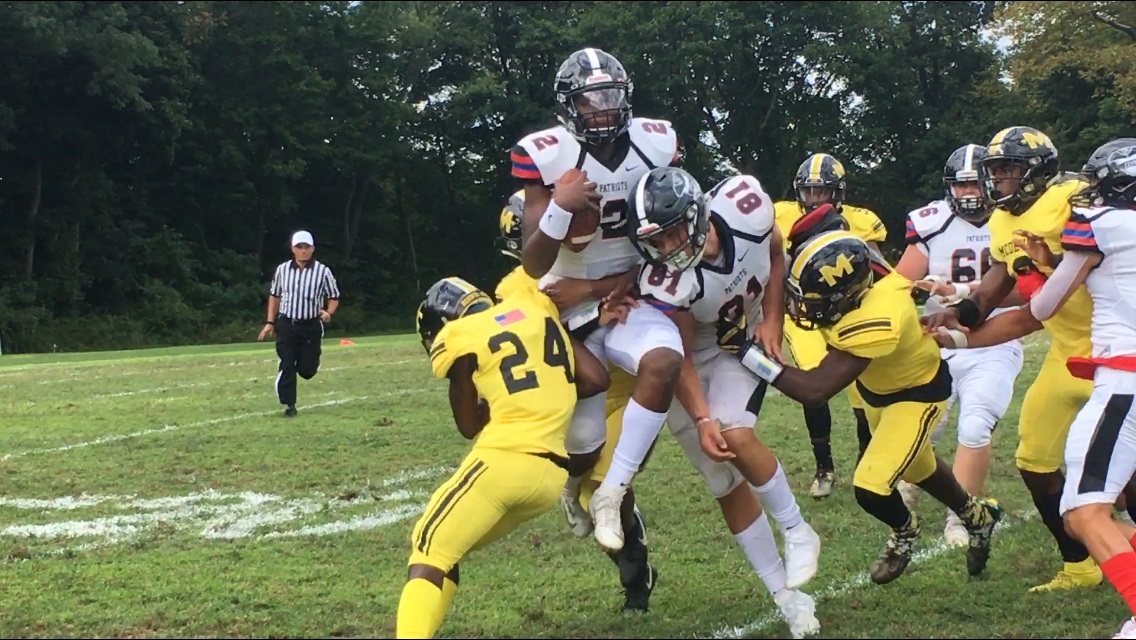 CHELTENHAM >> Jordan Longino packs a lot into his daily route.

Usually, the Germantown Academy junior is up early, often before the sun and in the school’s gym to put up some shots or work out with alumni who seem to populate the place. Then, it’s on to class and when that ends, out to the football field for practice.

It’s busy but Longino likes it that way and the Patriots football team is happy to have him at quarterback.

GA’s “one-two punch” of Longino and Lacey Snowden had it working Saturday as the Patriots handed Bishop McDevitt a 48-15 defeat.

“We had a good week of practice, we executed in practice and executed in pregame, we have good receivers, we have a good line and good protection, so I just had to make the throws,” Longino said. “We work on routes all the time, our timing is only getting better and better. It’s only week two for us, so there were some struggles but for the most part, we were pretty consistent.”

The reason Longino is up so early is to make sure he’s still working on his basketball game during football season. Already a 1,000-point scorer, a first team All-Inter-Ac and a first team all-state selection, the 6-foot-5 junior is a highly regarded prospect with a lengthy list of college suitors.

While his 23.0 points per game scoring average last year has programs like Villanova, Michigan, Indiana, Penn and many others keeping eyes on him, football is an equal love for Longino.

“I love both sports, I want to play basketball in college but you never know, football was my first love and I’ve played since I was young,” Longino said. “Coach (Matt) Dence is a great guy and everyone on the team are my brothers, so I have to keep coming back for them. Deep down, I was always going to play football, you have guys telling you not to play but I was going to play.”

Saturday, Longino was terrific in completing 10-of-13 passes for 222 yards. He didn’t throw for a touchdown, but had a couple passes go down to the one-yard line and he rushed for 30 yards on five carries including two touchdowns.

“Give that kid a trumpet and in about two days, he’ll be awesome at that,” Dence said. “He’s got it upstairs, he’s got the talent level and he’s got the attention to detail. Kyle Donahue, our quarterback coach, is about as good a quarterback coach you’re going to get at the quarterback level and they’re in sync. Jordan is a student of the game, he’s a Division I basketball player but if you’re a Power Five school watching that film, tell me why you’re not offering that kid because he is unbelievable.”

GA has four new starters on the offensive line this year, but Longino gave the group plenty of praise on Saturday. He did the same for receiver Tayshaun Mack, a favored target and Snowden, who powered to 164 yards and three scores on the ground.

GA got really contributions in every phase of the game Saturday.

Jerry Griffen-Bacthler ran the opening kickoff of the game back 87 yards for a touchdown, helped out by a block from Shane Harkins deep in McDevitt territory. While McDevitt did come back to tie the game 7-7, GA never trailed.

Germantown Academy also got a huge stop to end the first half, denying McDevitt a third score after the Lancers got down to the Patriots’ 10-yard line.

Harkins had a big game on the defensive end, walking up the hill back to his team’s locker room with his jersey covered in dirt and the tape on his arms worn ragged. It felt every big stop the Patriots got on defense saw the senior linebacker/safety emerge somewhere from the pile.

“He’s one of those guys that just has the mindset to be a football player,” Dence said. “Does he get caught in a few bad spots because of it? Yeah, but he’s going to come down, whack you and be the guy to finish tackles. Against Lonnie Rice and them, we needed that guy.”

GA’s defensive front caused a lot of havoc and had Rice scrambling around plenty while the secondary did a nice job with a couple pass breakups and three total interceptions. The last, which came late in the fourth quarter, ended with a nice moment for reserve Aiden Zakariwecz who took it back 63 yards for a touchdown.

Snowden ran hard all game and despite losing a fumble early on, kept hold of the ball the rest of the way and set up two scores with a 46-yard screen pass and a 79-yard run.

“With me and Lacey, it’s like a one-two punch,” Longino said. “We kind of feed off each other, if he gets a big run it sets us up for a big pass or the other way around.”

When McDevitt coach Mike Watkins was putting together this season’s schedule, a couple people asked if he was being a little too ambitious.

The Royal Lancers have a tough nonleague slate and with 26 of their 49 players being freshman, it meant a lot of them would have to learn by trial. But if the goal is to win a PCL Blue Division title, then McDevitt is going to need those guys in the coming weeks.

Saturday was a tough one for McDevitt, but only if the Lancers don’t take anything out of it.

“We’re real young and we’re thrusting a lot of guys into positions where they have to grow up really, really quick,” Watkins said. “We have seniors in key positions like Lonnie Rice, Tyrone Foweler and Hakim Dodson, but our young guys, we have to grow up quicker.”

Rice, the Buffalo-bound senior quarterback/linebacker, played his heart out as usual but had a lot thrown his way. The senior did account for 175 passing yards and both Lancer touchdowns while adding 76 yards on the ground but threw two picks late in the game.

“He’s an emotional football player but I say it a lot, part of what makes him such a great football player is that he plays with everything he has,” Watkins said. “It just wasn’t there today and it’s such a different group with 26 freshmen on a 49 man roster, we’re asking a lot of these guys to play key roles and we think we can put it together.”

There were positives for the Lancers. Freshman James Bermudez rushed for 40 yards and had McDevitt’s first TD on a 59-yard catch and run play and freshman defensive lineman Jamil Lyons was all over the field.

“In the Catholic League, in our division, every game is tough and that’s why when I set the schedule and people said ‘are you sure?’ we said we wanted to play tough teams before we saw Cardinal O’Hara,” Watkins said. “That’s what we’ve done and experienced.”