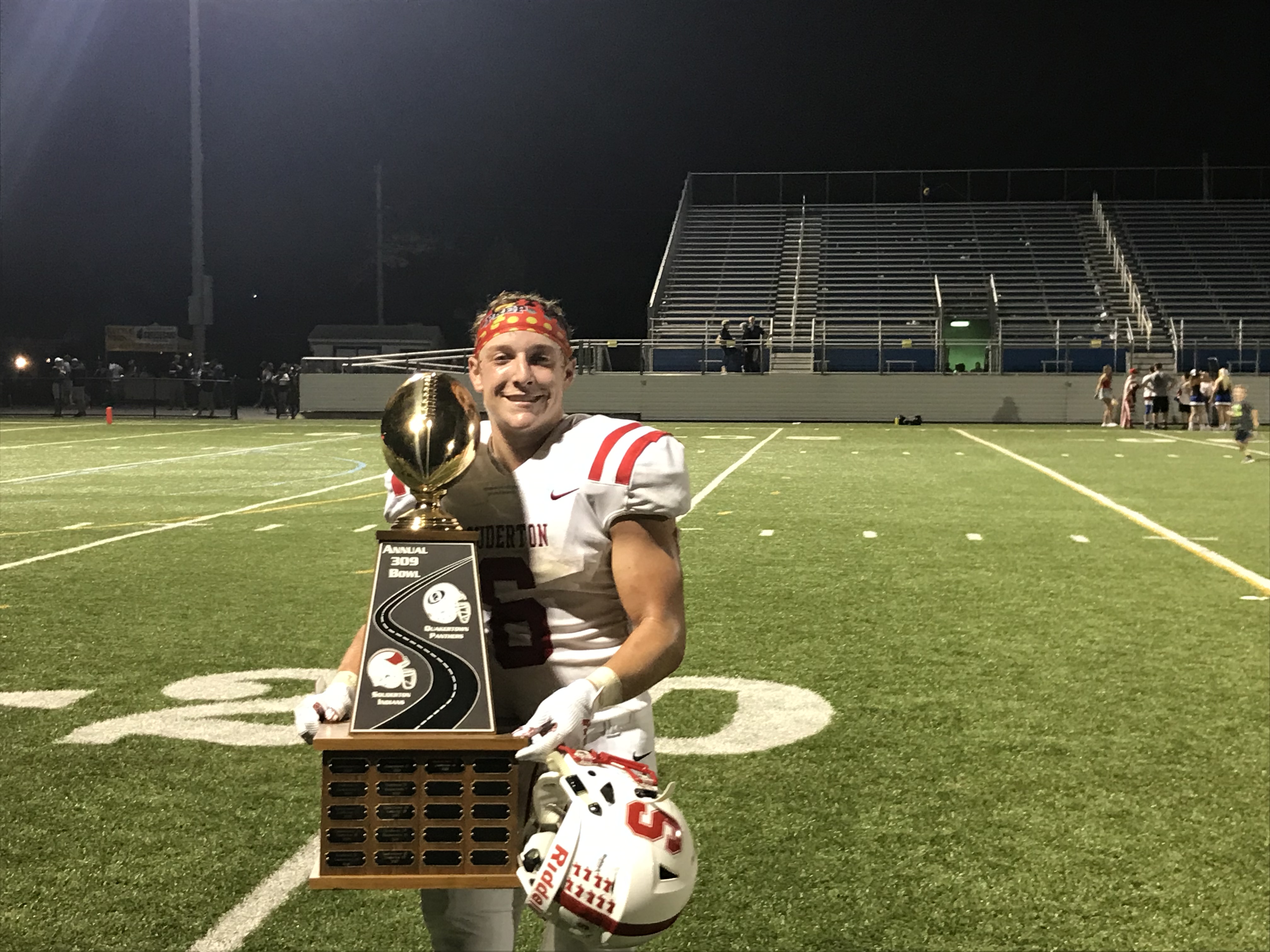 QUAKERTOWN >> After the Souderton football team steadied itself in the second half, Nick Guthre finally tipped Friday night’s 309 Bowl in the Indians’ favor midway through the fourth quarter.

The Big Red senior found a path through the line, dashed upfield then bounced his run left and didn’t stop until finding the end zone 66 yards later to put the Indians up 17-10 over host Quakertown with 6:42 remaining.

“The guards got a good push up front,” Guthre said. “It was a read option play so (Andrew Vince) could of kept it or gave it to me, he ended up giving it up. I saw a quick split hole to the outside and I just tried to hit it as fast as I could, give the corner a little shake and take off.”

Guthre added another touchdown with 93 seconds left as Souderton recovered from a flat first half, shut out the Panthers after the break and scored 17 points in the fourth to rally for a 24-10 victory at Alumni Field.

“A lot of it was just heart,” Guthre said. “The first half, I feel like we didn’t really want it as much as we did the second half. Halftime we came together as a team and really talked it out and we really all brought it the second half. Just a full, heart-filled game, overall emotion going up and down like a roller coaster but we really came out and I think we really secured it in the second half.”

After totaling 101 yards and two scores on nine carries, Guthre literally secured the 309 Bowl trophy — running over to the Quakertown sideline to procure the hardware so the Indians could celebrate the end of a two-game losing streak to the Panthers.

“We were really sloppy in the first half,” Souderton coach Ed Gallagher said. “We told the kids at halftime, we didn’t rant and rave, we didn’t make any great tactical moves or changes, we just kind of said ‘Look guys you can’t play any worse, all right. You took their best punch all right, you just need to settle down, go out and play your game.’

“I think we’re a good football team. We played much better defense in the second half. We were able to control them as much as we possible could and we got the offense going. So very happy with how the kids bounced back after a very poor first half of football.”

Senior quarterback Vince produced 104 yards and a touchdown on seven carries, collected another 59 yards on 5-of-11 passing and defensively added an interception on the game’s final play as the Indians are out to a 2-0 start for the first time since 2016.

“It was more just in between our ears,” Vince said. “Getting right, getting mentally focused to get up, get to the next play, running up to the ball, get set and run the ball. We were a little more focused mentally second half and that’s what gave us the edge.”

In the opening half, the Indians hurt themselves with penalties on offense while on defense Big Red could not get off the field, the Panthers (0-2) going 5-for-7 on third down before intermission. On a 3rd-and-10 in the second quarter, Quakertown QB Will Steich lofted a ball to Ben Kave, who reached up to haul it in for a 15-yard touchdown and a 10-7 Panthers lead at 4:31.

Steich was 9-of-15 passing for 118 yards while Tyler Merwarth added another 44 yards on 4-of-9 passing. Schmidt also led the Panthers with 64 yards on 11 carries and caught three passes for 31 yards.

The Indians drove to the Quakertown 1 on the ensuing drive, but flags pushed Big Red back to the 24 and a 41-yard field goal try in the final seconds was blocked, keeping the Panthers up three.

“You can’t just show up, that’s what they have to realize,” Gallagher said. “And we preached it all week and I knew Quakertown was going to give us a punch. They’re good, they’re tough kids, they always are, (Quakertown coach) George (Banas) does a great job preparing them and we just had to weather that storm and it lasted a little longer than I was hoping.”

Souderton pulled even 10-10 four seconds into the fourth when Will Leyland connected on a 21-yard field goal. The Panthers got to the Indians 36 on the next series but Steitch’s throw towards the end zone was intercepted by Evan Kutzler. Four plays later, Guthre broke his 66-yard touchdown run.

After forcing a Quakertown three-and-out, Souderton took over at the Panther 45 and needed five plays to go up 24-10 — Guthre plowing over the goal line from two yards out for his second rushing TD at 1:33.

“As much as you have some talent and you go in and think you can possibly do this, possibly do that, we were a 4-6 team last year,” Gallagher said. “Even though we were really good in the middle of the year, we still finished 4-6. The winning mentality isn’t there yet. I think we’re starting to build it again. We had it back in the late 2000s, right now we’re building it back up and I think once they get the confidence and understand what they need to do to win football games, we’re going to be fine.”

Souderton’s first-half struggles began on the opening kickoff when Quakertown’s short kick dropped into empty space between a few Indians and recovered by the Panthers at the Big Red 35.

“Everything went wrong, I mean it was just the worst possible thing that could happen,” Gallagher said. “That’s happened to us a couple times before where they kick the ball and it just — I love playing on turf but the turf bounces in different ways. Honestly, we had a kid that was right by it and it almost hit him in the back, he had no idea the ball was there.”

Quakertown was held to a field goal on the drive — Gavin Croissette connecting from 26 yards out at 8:28. Souderton answered on the next series, Vince’s 1-yard touchdown on a QB keeper making it 7-3 Indians at 5:27 in the first quarter.

Kennett swarms Chichester after slow start
O’Brien, Marple Newtown get a kick out of beating Aces