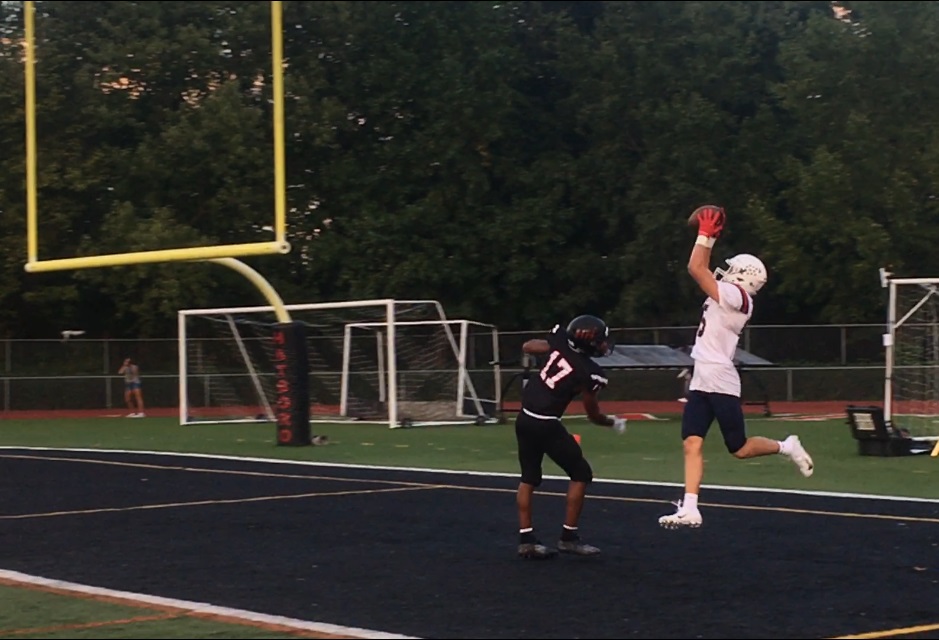 HORSHAM >> Anthony Giordano missed his first throw of the night then not much else after that.

The CB East junior quarterback, making just his second varsity start, was electric Friday night on the road against Hatboro-Horsham through the air and with his feet while accounting for six touchdowns. With standout running back Jake Ventresca sidelined due to an injury, the Patriots knew they were going to need a team effort to grab their second win of the season.

Once Giordano got in rhythm, there wasn’t much the Hatters could do as CB East surged to a 45-28 win.

“The big word of the year for me is ‘execution,’” Giordano said. “We’ve been getting reps of all these plays for a long time now. We did a great job executing against Quakertown and the same thing again tonight, it was truly a great team effort.”

After that first incompletion, Giordano completed the next eight passes he threw and finished the night a sterling 18-of-23 for 240 yards and three scores. He hit six different receivers, didn’t throw a pick and was only sacked once but the junior was quick to pass that off to his receivers, running backs and linemen for executing in front of him.

Giordano took over the spot from the graduated Evan O’Donnell, a terrific high school player now at Catholic University. The 6-foot-1 junior, who is a co-captain this fall, isn’t trying to be a carbon copy of O’Donnell but is taking the best of their relationship as he puts his stamp on the quarterback position.

“He was a really good quarterback for us and a great mentor to me, he meant a lot to me and I consider him a brother,” Giordano said. “I’m just trying to fill some big shoes and I look at it as that’s all I’m trying to do.”

Giordano said the throw that really got him going was the 15-yard touchdown to senior Will Silverman that was the game’s first score. The right-handed QB threw a perfect ball to the far corner of the endzone where Silverman was the only one who had a chance to catch it.

Silverman, who finished with five grabs for 86 yards, caught plenty of passes from O’Donnell last year and said nothing has changed with a new voice under center.

“He’s always putting the ball right on the spot,” Silverman said. “We have a good connection, he knows where to put the ball and he knows where we’re going to run, so it all works out. He’s a great leader, a junior captain and he’s always lifting the spirits of the team and carrying the offense.”

The game was tied 7-7 when an errant snap on a Hatters punt led to a safety early in the second quarter. Giordano capped the drive following the Hatboro-Horsham free kick with a two-yard touchdown run, the first of his three rushing scores, then hit Mark Lapioli for a two-point conversion and 17-7 lead.

From there, the Patriots played in front as Giordano just kept finding the open man or took it himself as part of a 49-yard rushing effort. The line of left tackle Nick Sebel, left guard Jack Duffy, center Griffin Trail, right guard Matt Datillo and right tackle Bryce Smith did their jobs very well all night.

“They blocked their butts off, that’s all I have to say,” Giordano said. “They did really nice job and gave me a nice pocket every time I threw the ball.”

CB East’s offense, which picked up 25 first downs, clicked most of the game and didn’t turn the ball over. Most importantly, every time the Hatters scored, the Patriots answered with a touchdown drive to keep the lead at least two scores in front.

There’s still a lot of season left, but the efforts born of an offseason spent in repetition have looked good for Giordano and his crew of receivers so far.

“It’s all about timing with them running their routes,” Giordano said. “Whether it was in practice or going out with those guys after or before practice to run routes, it’s all about execution.”

The Hatters were without senior standout nose tackle/fullback Jordan Collazo on Friday but a number of other players stepped up in his place on the offensive side.

Senior N’Gianni Cerisier had a breakout game, carrying the ball 15 times for 156 yards and a touchdown and catching one pass for an 18-yard catch and run score. Omar Ali added 56 yards on the ground and showed a lot of toughness running the ball, usually requiring a host of Patriots to get him tackled.

Hatboro-Horsham picked up 14 first downs and freshman quarterback Colin O’Sullivan put together another solid game in his second start. The first-year starter threw for 160 yards and three scores while completing 11-of-20 passes mostly playing from behind.

Nahji Logan won a jump ball and wrestled down the first touchdown pass while Chrishon Anthony turned a fourth quarter pass over the middle into an 80-yard score to help out the passing game.

After the safety with 8:13 left in the second quarter, the Hatters were in catch-up mode the rest of the game.

Last week, it was CB West’s ground game that hurt Hatboro-Horsham but on Friday, it was East’s passing game and some runs that kept the defense on the field extra plays. Giordano converted a fourth down run on the first scoring drive and another keeper in the second quarter while also moving the chains with 13 completions of 10 or more yards.

Penalties added up too, as the Hatters were flagged 11 times for 117 yards. One of them, a holding flag, wiped out a 45-yard completion that would have put the Hatters on the Patriots’ five-yard line while trailing 24-14 in the second quarter. The drive ended with a turnover on downs.

O’Brien, Marple Newtown get a kick out of beating Aces
Goldkamp’s first goal a winner for Garnet Valley