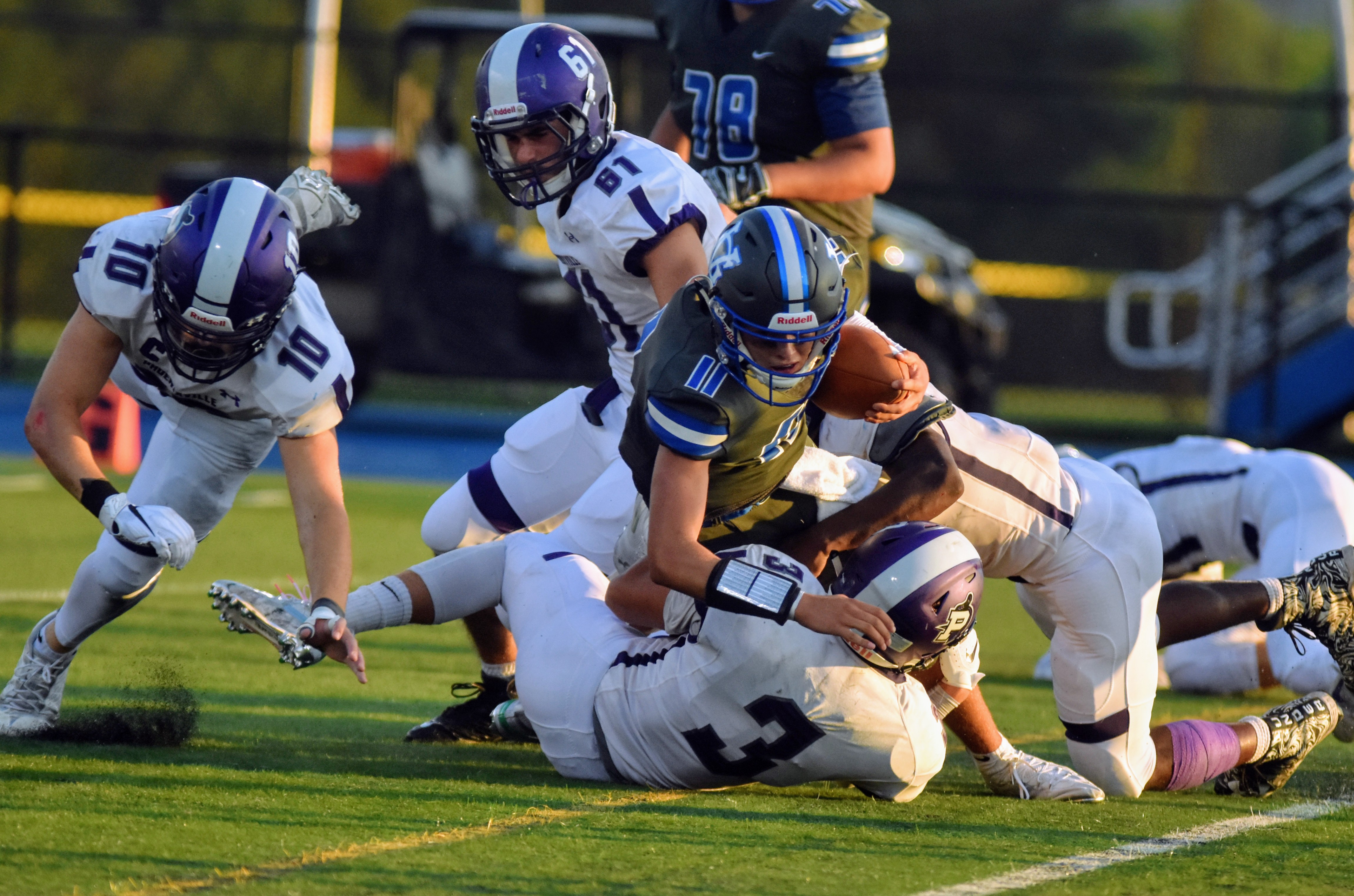 EAST WHITELAND >> Great Valley played with an execution level far above its youthful cast as it opened the 2019 scholastic football season against Phoenixville Friday night at Valley Stadium.

New head coach Jeff Martin recorded win No. 1 on his first try as the Patriots defeated the Phantoms, 22-6, in the non-league rivalry game between the two Route 29 schools.

Sophomore quarterback Andy Talone scored two touchdowns and threw for another one. Talone was effective running and throwing the football, along with a large number of different running backs. Talone directed a productive offense as the Great Valley offense took control of the game up front against the Phantoms, who are also quite young.

Most of the Patriots also performed well on defense, showing their two-way strength. They kept Phoenixville off the scoreboard except for a 4-yard touchdown run by senior Shy’nir Jeffcoat in the third quarter. That score was set up by a hard hit and ensuing fumble recovery at the Great Valley 29-yard line on a punt.

The young Phantoms were also hurt by the loss of two-way starters Aidan Foley (running back/linebacker, back) and Owen Koch (running back/linebacker, shoulder) to injuries in the first quarter. Defensive end/tight end Brady Aselton also missed a large portion of the game with an injury. The extent of the injuries were not immediately known postgame.

“I am very proud of everyone tonight,” said Martin, who has been coaching at Great Valley for 14 years. “For the most part, we played well overall. We’re a young team made up mostly of sophomores and juniors. It was their first game playing at night.”

By the same token, he was also proud of the senior players who had a large impact on the outcome of the game.

“Collectively, the team played very well,” said Martin. “I was really proud of them.”

The rest of the Great Valley coaching staff consists mostly of former Phoenixville coaches so the two teams are well-acquainted with each other.

“It was amazing,” said Talone. “We were flying off the ball. Our offensive line was really awesome. Our running backs, our offensive line, our receivers were all amazing.

“We needed this win. It is always a rivalry with us and Phoenixville, and it is the first game of the season.”

The Phantoms hurt themselves with a number of bad snaps on punts that resulted in poor field position. The first Great Valley points of the night came on a safety in the first period when Phoenixville punter Tre Davis was tackled in the end zone after recovering a bad snap.

Phantom coach Don Grinstead said that lack of execution was a result of bad timing that he hopes will be corrected with more work in practice.

He looked more at the personnel picture.

“We can’t overcome that many injuries,” said Grinstead. “We lost two guys in the first quarter who are two-way starters. We’re very young. We have to work to get better each game. Our goal with a team like this is to keep getting better every week. The only way to fix it is to do it every week so it is right by the end of the season.”

The Phantoms did get a solid game from new quarterback Jack Pizor, who ran the ball with authority, and was also active at linebacker on defense. Grinstead said the coaches have put on Pizor’s shoulders and he is responding well as a leader.

The Patriots held a 15-0 halftime lead. Talone scored on a 5-yard run for the first TD of the game, night and season. Then he hit Ruppert with a 17-yard scoring pass. Talone added a 2-yard TD run for the final score of the evening.

Phoenixville senior Anthony Stevenson blocked a field goal attempt. He was also involved as a running back, wide receiver and defensive back.