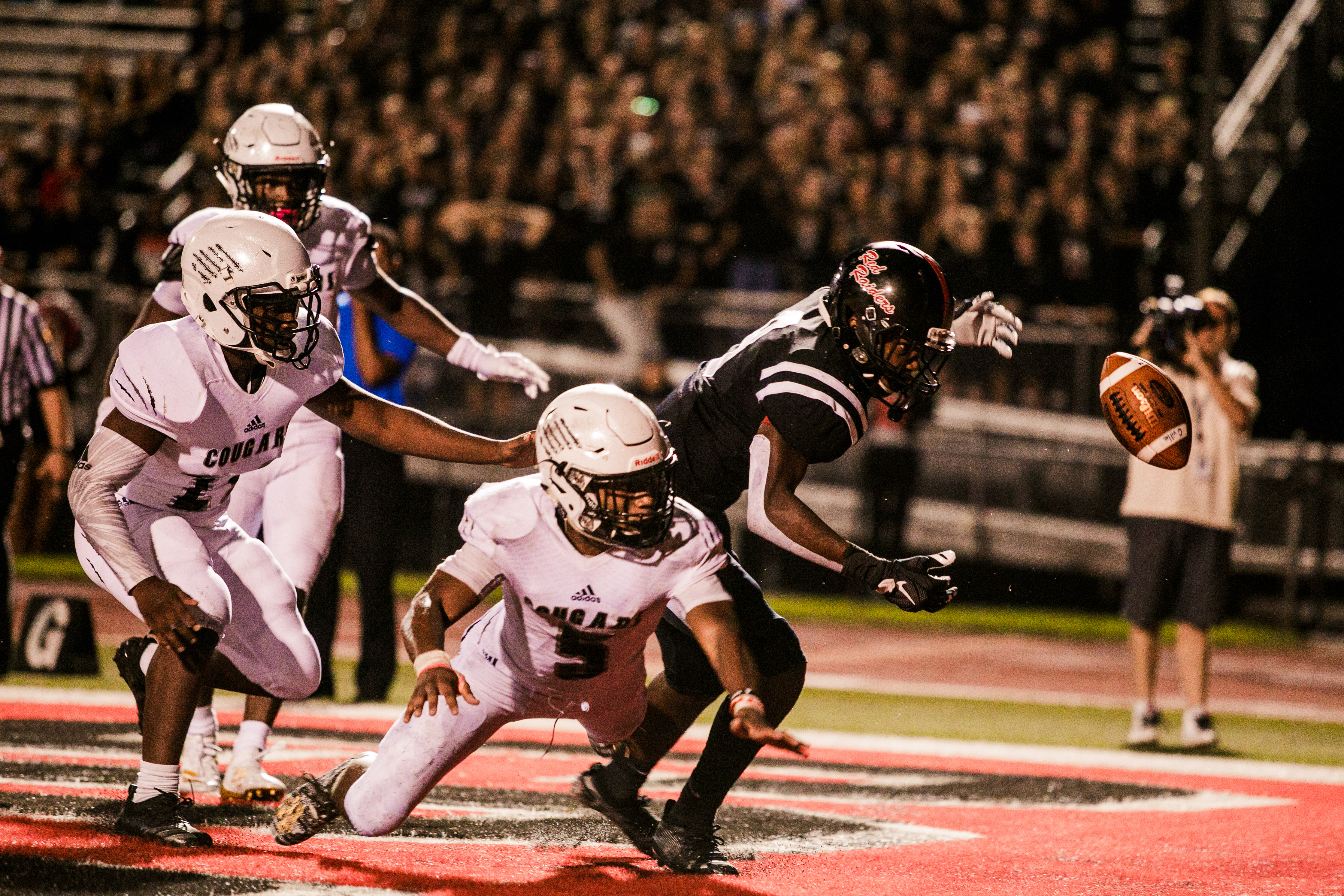 CALN — While Coatesville coach Matt Ortega and his top assistants huddled to lick their wounds after an opening night loss to Harrisburg, senior quarterback, Ricky Ortega, stopped by, repeating “it’s alright, we’ll be back.”

The younger Ortega’s optimism was no doubt spurred by what transpired the season before.

December, in the state semifinals, Harrisburg ended Coatesville’s season, reversing a week one result, and Friday, at Coatesville, the Cougars handed the Red Raiders their first season-opening loss since 2010, 14-6, in what was a sloppy, mistake-riddled contest.

With a bye week next and Cumberland Valley not for two weeks, Coatesville will have time to clean up its mess, acclimate the many new faces and bounce back from its first regular season loss since September of 2017.

Coatesville’s Ricky Ortega spins away from a tackle in the first quarter against Harrisburg. (Nate Heckenberger – For MediaNews Group)

“We’ll be back,” Ricky Ortega said. “Last year we beat them by 31 the first game and they came back and beat us, and I think we will do the same thing. No one is going to outwork us, I promise you that.”

The talent at the top is there with Ortega and senior receiver, Dapree Bryant, among others, but there were plenty of players on both teams making their debuts, and it showed.

Just like last year, the Raiders were plagued by penalties. They were flagged 15 times for 110 yards — Harrisburg committed 13 for 128 — with nine of them pre-snap fouls.

The explosiveness that Coatesville (0-1) has used to mask those errors simply wasn’t there, Friday. Coatesville’s longest offensive play was a 22-yard catch and run by Jordan Engler.

Coatesville’s Dapree Bryant gathers himself after a big hit on a failed fourth down attempt in the fourth quarter. (Nate Heckenberger – For MediaNews Group)

“At the end of the day, we only have three starters back on offense,” Matt Ortega said. “It showed a little bit, but (Harrisburg) was like that, too. It’s not like they came in with more experience. We can’t make excuses. It was 14-6, and we coulda won if we made a couple more plays.”

The Raiders needed that execution in the red zone. Twice Coatesville moved inside Harrisburg’s three yard line and twice they turned the ball over on downs.

The first opportunity, Ortega and Bryant connected for a touchdown, but it was brought back for an illegal man downfield penalty. Harrisburg also had a TD overturned due to a penalty. A missed field goal by Coatesville kept the game scoreless.

In the third quarter, down 14-0, Coatesville had a first-and-goal at the two, but delay of game penalties on third and fourth down pushed the ball back to the 11 and the chance fizzled.

“I think the kids realize we shot ourselves in the foot,” Matt Ortega said. “It’s not like we got stoned, but we were unable to finish in the red zone. Later in the year, if the kids trust the process and improve, I think we could be a dangerous team if we trust each other.”

The Raiders only had seven possessions in the game, not counting a one-play kneel down at the end of the first half, and they advanced into Cougar territory the first six times.

Coatesville’s defense played good enough to keep the offense in it. That unit held Harrisburg to 135 yards on 33 carries, but gave up 231 pass yards to the Cougars, who rotated quarterbacks.

In the second quarter, Coatesville stuffed the Cougars at its own five to turn them over on downs, and Ortega navigated the Raiders to the Harrisburg 27. But a botched pitch from Ortega to Bryant became the only turnover of the game, and the Cougars used a 10-play drive to score with three seconds left in the first half.

Bryant made up for the blip early in the fourth, returning a punt 44 yards to set up a six-yard TD run by Ortega with 11:26 remaining. Coatesville only touched the ball once after that, losing eight yards on three plays.

Harrisburg, meanwhile, ran 23 plays in the fourth to milk the game away. The icing on the cake came on a fourth-and-eight from the Coatesville 41. From his punt return position, Bryant gestured to the sideline that Coatesville was short on defenders, and Harrisburg’s punter, Trevion Carey, raced 16 yards for the first.

“We need to practice hard and get it back,” senior Shamaur Hall said. “We need to knock off Cumberland Valley and win eight in a row. We’ll see (Harrisburg) again.”