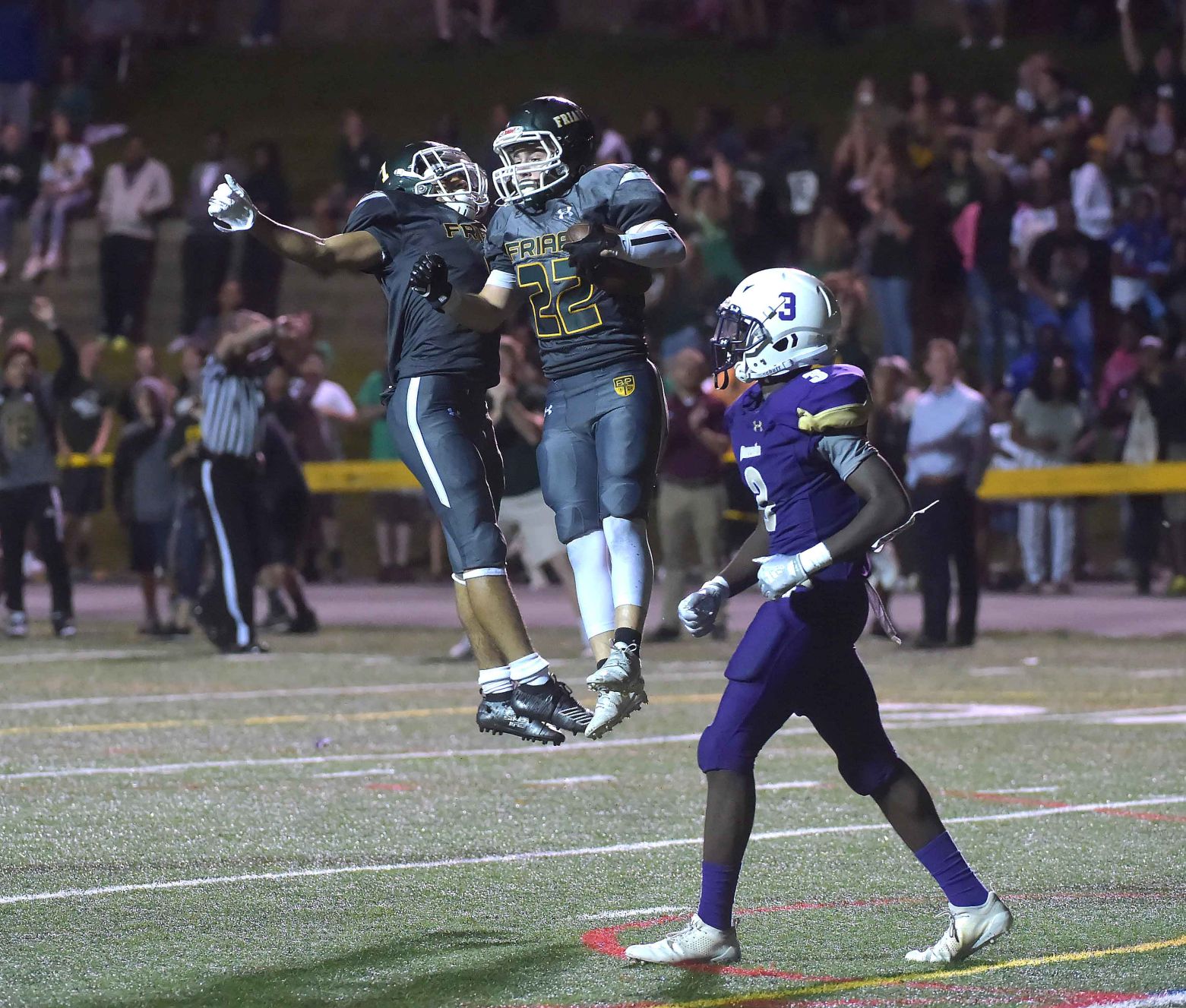 UPPER DARBY — Friday was supposed to be a night of celebration for the Upper Darby School District.

Unfortunately, the school’s new turf field was not finished in time for the opening of the high school football season, the school district announced this week.

The relocation of the Upper Darby Bowl with Bonner & Prendergast came next. First, school officials moved the game to Cardinal O’Hara, but township politicians (or dignitaries, as they were called during a pregame ceremony) stepped in. They wanted to keep the 15th annual game in the neighborhood. No offense to O’Hara, but “Upper Darby Bowl” doesn’t have the same ring when it’s played in Marple Township.

And the Friars put on a good show for the standing-room-only crowd.

Senior defensive back Ian Edwards was named the player of the game, intercepting one pass and breaking up a handful of others. Meanwhile, senior linebacker/safety Oscar Uduma got the Friars cooking with a 32-yard fumble return for a touchdown on the third play of regulation, setting the tone in a 21-9 Bonner & Prendie victory.

“I obviously didn’t do it by myself,” he said. “Our whole defense stepped up and dominated. We wanted it more.”

The big boys on the line, notably tackles Chile Adele and Ethan Cottrell, who is a 6-3, 335-pound sophomore, held the Upper Darby ground game to 62 yards on 23 carries. All-Delco running back Kareem McAdams was limited to 34 yards on 14 totes.

“We haven’t been big in recent years, but we finally got some size,” Bonner coach Jack Muldoon said. “They were huge tonight.”

Uduma lit the fire in the first quarter. A high snap sailed over the head of Upper Darby quarterback Kevin Kerwood, enabling Uduma to pounce on the loose ball and sprint 32 yards to the end zone.

“I saw the ball go up, checked with the QB, knew he wasn’t getting it,” Uduma said. “I said it before the game, that I was going to pick one up and take it to the house.”

Upper Darby’s next possession ended on an interception by Ibrahim Diallo. The B&P offense went right back to work. James Welde caught one of three third- or fourth-down passes from Kyle Lazer, a 31-yard catch-and-run to set the Friars up at the Upper Darby 1-yard line. Two plays later, senior running back Charles Ingram bulldozed his way across the end zone to make it 13-0.

“It’s just the way it happens,” Welde said. “I think everyone, all of our teammates, can make a big play. The ball happened to come my way a few times, that’s all. I just happened to be there.”

Bonner has endured four straight losing seasons. Needless to say, they are sick of being every team’s punching bag. Although it was only game one of at least 10, this was a statement win for the Friars.

“We’re all just sick and tired of losing,” said Welde, a 6-3, 195-pound junior. “As freshmen we came in and we weren’t very good. Our freshman team was good, but varsity wasn’t very good. Last year, same thing … but a lot of things changed. Everything is more organized and more efficiently run during practices. I think we needed that as a team in order to win.”

The Friars went to work in the second half, enjoying a 13-0 advantage. They marched 14 plays but were stopped a yard shy of the end zone on fourth down. UD’s defense hung tough, but the offense stumbled. On the next play, another botched snap, this time in the end zone, was recovered by B&P’s Mason Peterson.

The Royals produced nine points in the final quarter, the highlight a 23-yard scoring scamper by Kerwood.

“I’m really proud of the kids,” Muldoon said. “Upper Darby is one of the largest schools in the state, and every year we open up with them, which is not easy. We’re kind of starting to learn how to win a little bit and our guys are starting to understand that we have some talent, we have some numbers. The effort was there all night and I couldn’t be prouder.”

Unionville’s ground game too much for WC Henderson
Upper Merion gets off on right foot, rolls past Lower Merion