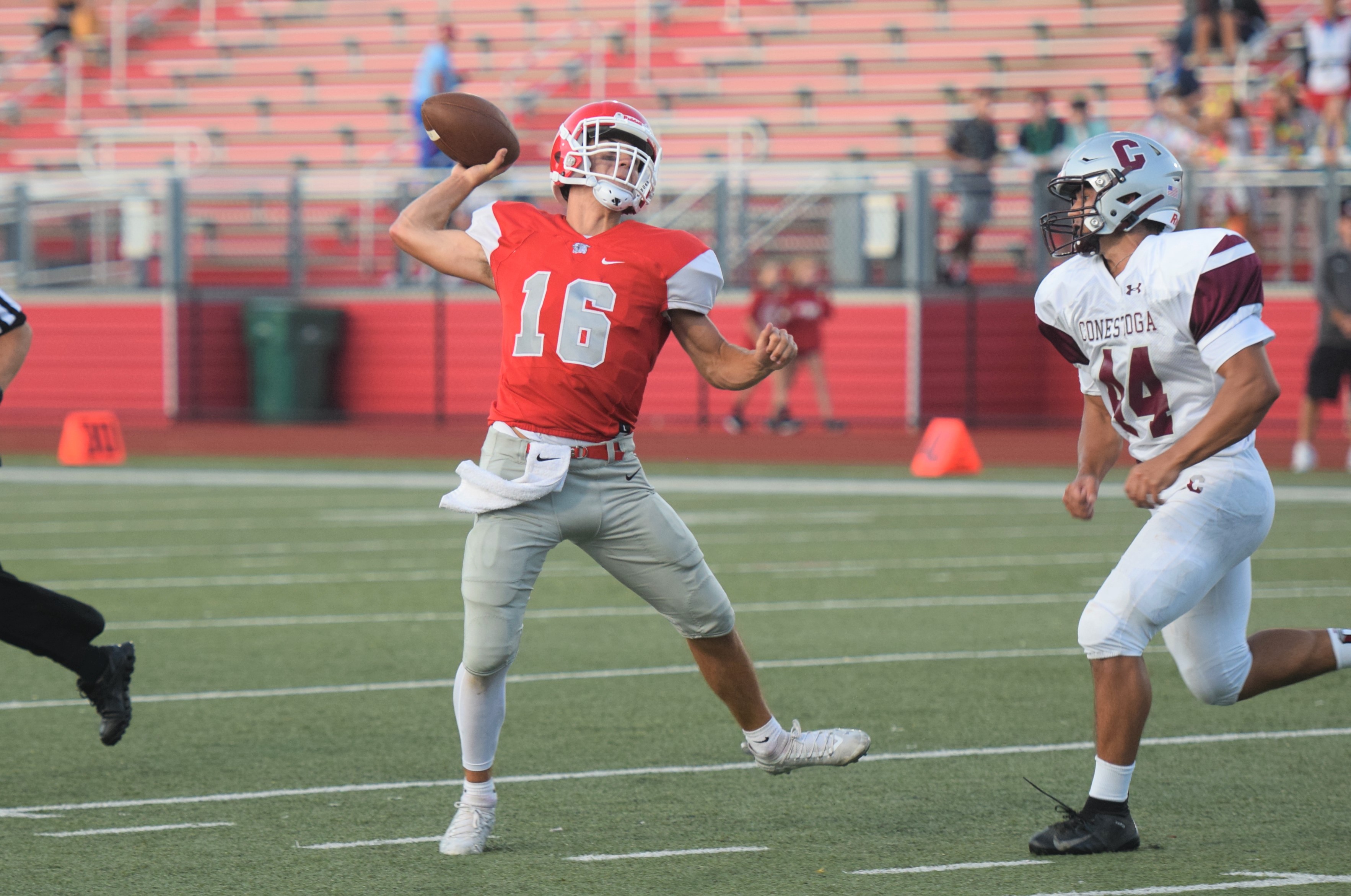 In addition to directing the Owen J. Roberts offense — particularly a passing game that was prominent in his team’s season-opening game with Conestoga — the Wildcats’ senior quarterback was also heavily involved in the kicking game, handling conversions, punts and kickoffs. Some of that was by design, some by circumstance.

“We’ve got three kickers out for the team,” Chamberlain noted, “but one got hurt during the game. Coach decided to have me kick in the first game.”

His offensive contributions ended up being more prominent.

Chamberlain compiled double-digit completions and triple-digit aerial yardage to help Owen J. Roberts roll up a 28-0 victory on the Pioneers at Wildcat Stadium. His two touchdown connections combined with heads-up plays from the defense and special teams to open the 2019 season on a promising note.

An 11-yard pass to Christian Grossi inside the first two minutes of the second quarter got Owen J. on track. After Samuel Kuhl covered a Conestoga fumble in the end zone two minutes later, Chamberlain added a 51-yard scoring strike to Dante DeNardo less than two minutes before the half for an insurmountable 21-0 lead — one to which he contributed two of his three placements.

“He made quick reads,” OJR head coach Rich Kolka said. “We have good hands on our receivers, too. They block well and are showing improvement. If everyone of our receivers can find matchups, we’re going to be difficult to cover.”

Chamberlain completed 12 of his 17 passes to six different players. DeNardo, with four catches covering 80 yards, ended up his most prominent target in an air game that covered 148 yards.

Matthew Cutrone had three receptions for 10 yards, and Grossi a pair for 19. Jonathan Hannevig, Connor Leister and Joshua Jackson had other catches.

“It’s early in the season. We’re testing things,” Chamberlain said. “We’re seeing the wide receivers grow and realize their potential. They made good plays on the ball.”

For Conestoga, the game displayed areas both good and in need of improvement.

On the plus side, Liam Kirk gave the Pioneers a workmanlike effort in the ground game, the senior tailback grinding out 74 yards on 13 carries.

“One positive … I thought with our kids, there was no question about their passion or fight,” Conestoga head coach Matt Diamond said.

Conversely, the Pioneers were hurt by turnovers and penalties. They were contributing factors in Roberts’ other two scores.

“The mistakes are the self-inflicted kind,” Diamond said. “We’re going to get them cleared up this week.”

Kuhl made Conestoga pay for a muffed snap at the 9:37 mark of the second quarter, pouncing on the ball in the end zone. In the third quarter, with the Pioneers punting the ball away, one player appeared to down the ball around the Owen J. 44. Leister, however, saw the opportunity to scoop up the pigskin and dash into the end zone for his team’s capping score.

“That was a heads-up play … an awesome one by Leister,” Kolka said.

At the same time, there were aspects of OJR’s performance Kolka sees as in need of improvement.

Among them was an early possession Roberts took deep into Conestoga territory, only to come up empty. Another came early in the fourth quarter, where the ‘Cats drove inside the Pioneer 20 but were stopped by an interception.

“You can’t start a game with a drive like the one we had,” he said. “You have to be able to finish. And throwing an interception in the other team’s red zone …”

Kolka is also looking for Owen J’s running game to become more of a factor. Joshua Jackson, gaining 39 yards on 16 carries, was its most productive performer.

“We have to run more,” he said. “Our passing game was the most consistent part of the offense.”

NOTES >> Kolka, affirming Chamberlain’s role in the kicking game: “He’s definitely going to kick when we need it.” … Dylan Bauer distinguished himself on Roberts’ defense by recovering a Conestoga fumble late in the second quarter. Riley Deshetler had one of the Pioneers’ fumble recoveries, and Freddie Mucklow an interception early in the fourth quarter.