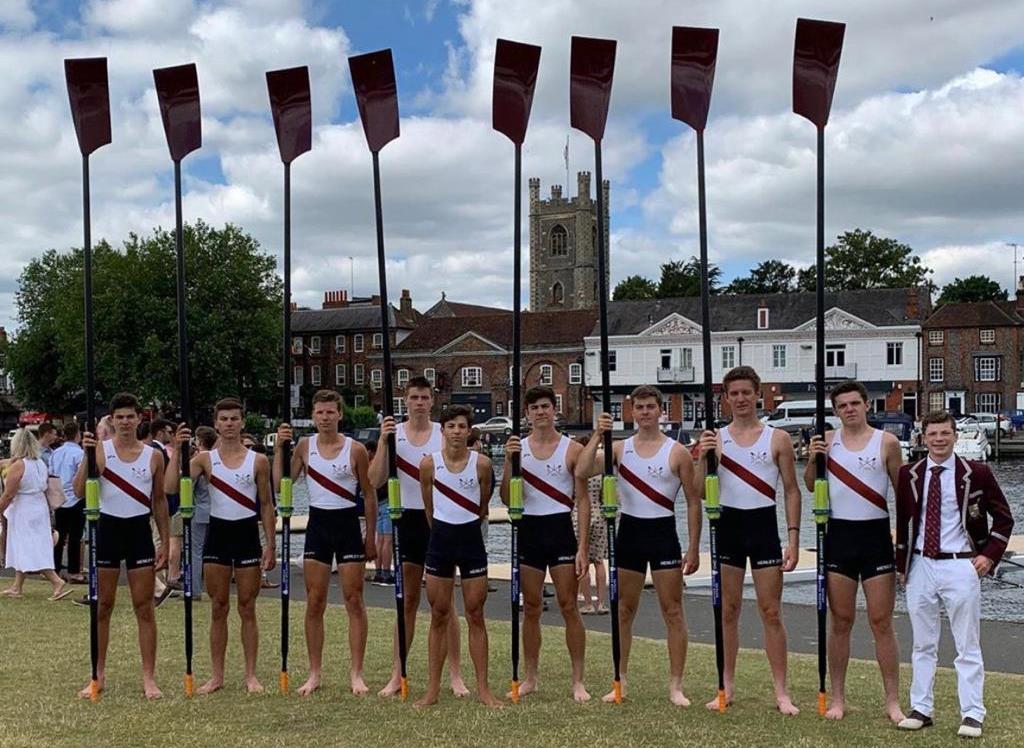 The St. Joseph’s Prep Varsity 8 that recently competed at the Henley Royal Regatta in England included a trio of rowers from Berwyn – rising juniors David Fritz and Thomas Schrieber, and rising senior Michael Linquata.
Held on England’s river Thames, the Henley Royal Regatta attracts thousands of visitors over a five-day period. Spectators witness over 200 races of international standard, including Olympic level talent. The St. Joseph’s Prep Varsity 8 contended for the Princess Elizabeth Challenge Cup, arguably one of the most anticipated races of the event. Seeing that most British students often do not attend university, the under 19 event draws a high level of attention given its depth of competitors.
The most unique part of the regatta is the course itself. Buoyed not by normal plastic floats but instead by thin wooden planks, the narrow two lane course adds an additional challenge for both rowers and coxswains who must maintain an almost perfect line in order to avoid hitting the wooden barriers. Racing is dual style, and the Princess Elizabeth Challenge Cup started with 32 entries and saw a rapid elimination of boats on each of the five days of racing.
Five of the SJP Varsity 8 hail from New Jersey – rising juniors Aidan Kilgannon and Patrick O’Connell, rising seniors Colin Rosser and Quinn Sullivan and recently-graduated Connor Thompson – and rising senior Robert Raics is from Bucks County.
Day one of racing saw an effortless win for St. Joe’s Prep over Canford School in England. The race plan was to pull ahead quickly and maintain a steady pace down the course in the hopes of conserving their leg muscles for day two. Their plan worked and St. Joe’s surpassed Canford by 3 ½ boat lengths.
On the second day, St. Joe’s was matched against Flatow-Oberschule of Germany. This particular race quickly became one of the best races of the entire regatta. A British journalist called this one ‘a corker of a race’ for the unexpected finish with just under 300 meters to go. The Prep managed to close a half length boat deficit into a two foot win, just edging out the Germans.
For nine US rowers, July 4 was celebrated in an incredibly unique way; on British soil with a dramatic win over Germany. Family of the oarsmen, 34 in total, were in attendance and dressed head to toe in red, white and blue leaving no question for the other spectators as to their home land.
On the third day, St. Joe’s faced fierce competition against Shiplake College and ultimately succumbed to the boarding school that calls this unique race course home.
Rosser, who was in the 7 seat, said, “Having the opportunity to row on an international stage against some of the best high school crews in the world while also being able to experience the rich history and festivities of Henley was not only unique, but it was a concrete reminder of the countless hours of hard work we put in over the past 10 months.”
Linquata, who was in the bow seat, added, “Going down the course between the barriers gave me the feeling that we were in the center of World Rowing.”