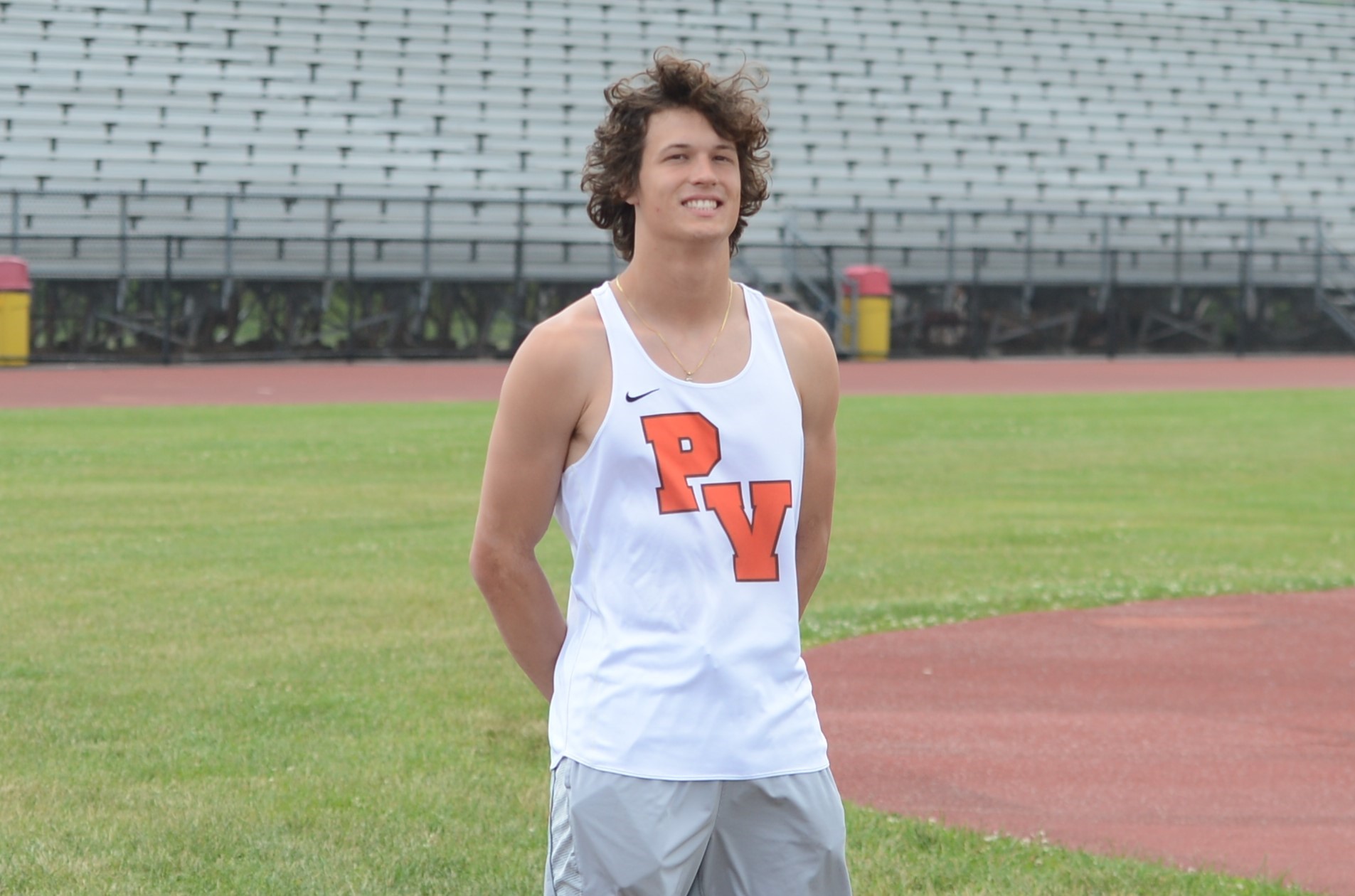 No event was too much to ask of Cole Peterlin.

Make that no events, emphasizing the quantity of races and jumps in which he competed this spring. His willingness to perform in multiple events went a long way toward helping the Perkiomen Valley boys track team achieve a high level of success at various levels … and Peterlin to emerge as The Mercury’s All-Area Boys Track & Field Athlete of the Year.

In various competitions this season, the PV senior participated in the three jumps (high, long, triple) and the 110 high hurdles. The shining moment of his campaign came at Shippensburg University, where Peterlin placed second in the high jump by clearing a new personal record.

He did it all, knowing the more events in which he participated, the greater number of points he could score for his team.

“It was a lot of fun,” he said of his time at PV. “It was tough at times, but hard work and proper mentality get you through it. I was happy with what I did here.” The Viking boys benefited from Peterlin’s work ethic and desire to excel. They won the Pioneer Athletic Conference’s team championship after finishing in a first-place tie with Owen J. Roberts atop the Liberty Division standings, and fifth place in the District 1-AAA competition.

PV had PAC gold medalists in Jason Wagner (shot put), Tyler Clifford (3,200) and its 4×100 relay alongside Peterlin (high jump). Peterlin’s silver-medal finish at states was complemented by fellow PV medalists Jason Wagner (sixth, shot put) and Tyler Clifford (seventh, 3,200). all of which contributed to the Vikings’ 15th-place team finish that was again the highest of any PAC boys entry.

“Cole’s always had the drive,” head coach Joe Petsko said. “He’s been compmetitive and talented since his freshman year.”

Peterlin’s desire to be a team points-scorer was part of his decision to take up the 110 high hurdles. He started working on the event during the indoor track season and made an immediate impression on Petsko and PV assistant Ron Livers.

“It was in the middle of the winter,” Livers recalled. “I saw him go over hurdles in practice, and I knew he could be special. He got on it right away and went at it like gangbusters.” Perkioman Valley’s Cole Peterlin clears the bar in the high jump at the District One Track and Field preliminary at Coatesville Area High School.

Peterlin’s development in hurdles was marked by a 14.42 second clocking, good for third place at PACs, and a 15.47 that scored him sixth at districts. During the indoor season, he did well enough in the 110s to qualify for the state meet.

“That speaks to his athleticism, qualifying for indoor states,” Petsko said. “I think it’s a natural fit for him. He’s always trying to expand, to try new things.

“We knew we had a good team coming in. Hurdles was one area where we were missing people. He filled a need.”

But high jump ended up being Peterlin’s most productive event. The PIAA’s indoor champion in the winter — he cleared 6-7, an inch better than the next four placers — he won PACs with a 6-3 but was only fourth at districts despite hitting 6-5.

“I tied my personal best at the indoor meet, but I struggled outdoors,” he recalled.

In a resurgence at Shippensburg, Peterlin upped his personal best to 6-8. While it equaled the highest jump by Coatesville’s Ousman Kamara, the gold went to Kamara by virtue of his reaching the mark ahead of Peterlin.

“My steps being good was the main thing,” Peterlin said. “My body was rested. Everything went well.” Peterlin got his start as a high jumper while in eighth grade. Developing a naturally good flow on the approach and jump, he worked with Livers to effect an improvement of a couple inches in his height every year.

“We changed his approach around,” Livers added. “When he was first learning, he had a short approach. As he becomes more refined, he can stretch out and add speed.”

His success in track and field afforded Peterlin a measure of consolation from the injury issues he faced this past fall, as the starting quarterback of the PV football team. An ankle injury caused him to miss one game, and a concussion two games, including the PAC championship game.

“It didn’t change anything in my mind,” he said. “I knew I had another season to compete.”

Peterlin will now head to Liberty University in Lynchburg, Va., to continue his academic and athletic careers. He plans to initially focus on business finance or math in the classroom, and in the high jump and hurdles on the track.

“I hope to get a lifting program going, and work in the off-season,” he said. “Put on weight and muscle.”

“He needs to refine his technique, but he’s so smooth and effortless. He can carry on with it in college,” Livers added.