All-Delco Boys Track & Field: Odunjo’s aim is to break records rather than hurdles 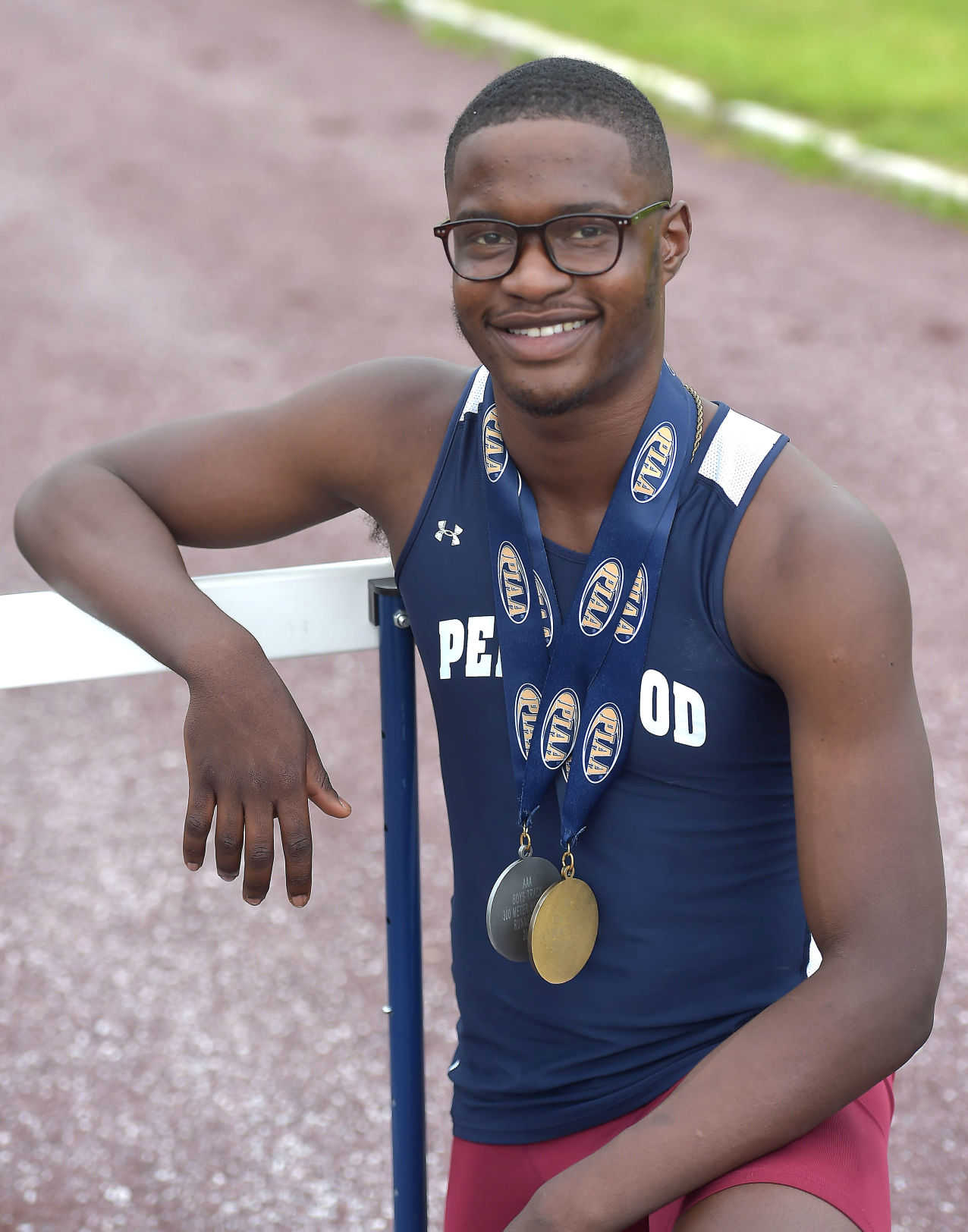 Penn Wood's Timi Odunjo took first in the 300 meter hurdles at the District 1 Class 3A track and field and was second in the event at the PIAA championships. (Pete Bannan/Digital First Media)

YEADON — There’s an upper-level storage room in the auditorium at Penn Wood High School where the track team keeps a few hurdles to use for winter workouts and training in inclement weather.

Every time junior Timi Odunjo goes into that room he is reminded of the first attempt he made at being a hurdler prior to his freshman indoor season.

Dennis Manyeah, the 2017 Daily Times boys track Athlete of the Year, and All-Delco Janae Pitt were doing a hurdles workout one day when they asked any of the freshmen if they wanted to give the hurdles a try. Being the adventurous type, Odunjo decided to give it a shot.

His first attempt at being a hurdler did not go very well. Penn Wood’s Timi Odunjo took first in the 300 meter hurdles at the District 1 Class 3A track and field and was second in the event at the PIAA championships. (Pete Bannan/Digital First Media)

“I hit the hurdles a lot,” said Odunjo, whose family emigrated to the United States from Nigeria when he was two years old. “I even broke one. It’s still there. It’s just sitting in the corner and whenever we practice indoors I see it when I go to get the hurdles out of that room.”

As teenagers will, a few of his teammates had a little fun at Odunjo’s expense, saying that maybe the hurdles weren’t for him. But he was undeterred.

Odunjo turned out to be right. In two years he has developed into one of the premier intermediate hurdlers in the state and has carried on what has become somewhat of a Delco tradition by being named the boys track Athlete of the Year by the Daily Times after winning two medals at the PIAA Class 3A championships. He was second in the 300 hurdles and teamed with Duncan Tarphen, Davon Battle and James Nmah. Odunjo also was on the 4 x 100 relay with Nmah, Tarphen and Tayvon Williams that qualified for the state meet.

Williams and Queen were better in the 110 hurdles, although Queen did win the Class 3A 300 title at the 2005 PIAA championships. Williams also was a state champ in the pole vault.

Graham, Tomov, Hawkins, Lemmon and Zeh are repeat selections. Thomas is the only freshman named to the All-Delco team, which was chosen by the Daily Times sports staff in conjunction with county coaches.

Being a hurdler at Penn Wood isn’t easy. Futch saw to that. Other programs have school records. At Penn Wood, the 300-meter hurdles record is the state record, which Futch set when he ran 36.43 to win the PIAA title as a junior in 2011.

“The legacy that Eric set makes our goals, coming from this team, higher,” Odunjo said. “You can’t just get a school record. You have to get the state record. The bar is set so high that to be remembered as a hurdler here, you have to do something big.”

As everyone knows, the Patriots aren’t training on the best facility. Kerr Field, Penn Wood’s home track, if you can call it that, is in dire need of a makeover. But year after year head coach Lenny Jordan turns out some of the best athletes in the state.

“That’s why I wanted to take the picture here,” Odunjo said, referring to his Athlete of the Year shoot. “It shows where we come from. We run on gravel. We run in our upstairs hallway. In the rain, we’ll run on a wet track. We don’t have the best facilities, but it shows that we’re built differently. We have a dog mentality. We’re the only team or one of the only teams in the district that doesn’t have home track meets. That’s probably why the people that come from here become great, because they have to overcome so much.”

Odunjo bounced back from an injury-plagued sophomore year to have a breakout season as a junior. He was ranked No. 1 in the state in the 300 hurdles and won every intermediate hurdles race he entered until the state final, when he finished second to Northeast’s Godwin Kabanda.

The pain from that loss is still fresh, but has also made Odunjo more determined than ever. His short-term goal is to break Futch’s state/school record. His best time was 37.80, which he ran to win the title at the Delco Championships. He would break 38 seconds two more times, in the finals at the District 1 and PIAA Class 3A championships.

To put that in perspective, Futch broke 38 seconds in four of the last five races he ran as a junior including the state/school record in the state final.

Next is to garner a college scholarship, where he plans to major in business, although he’s not sure if it will be on the financial end or the marketing end.

“I can see myself running a business,” Odunjo said. “I don’t like to be bossed around, so to speak. Running a business gives you more freedom to express yourself and do what you want with your life.”

And to think it all started with a broken hurdle.