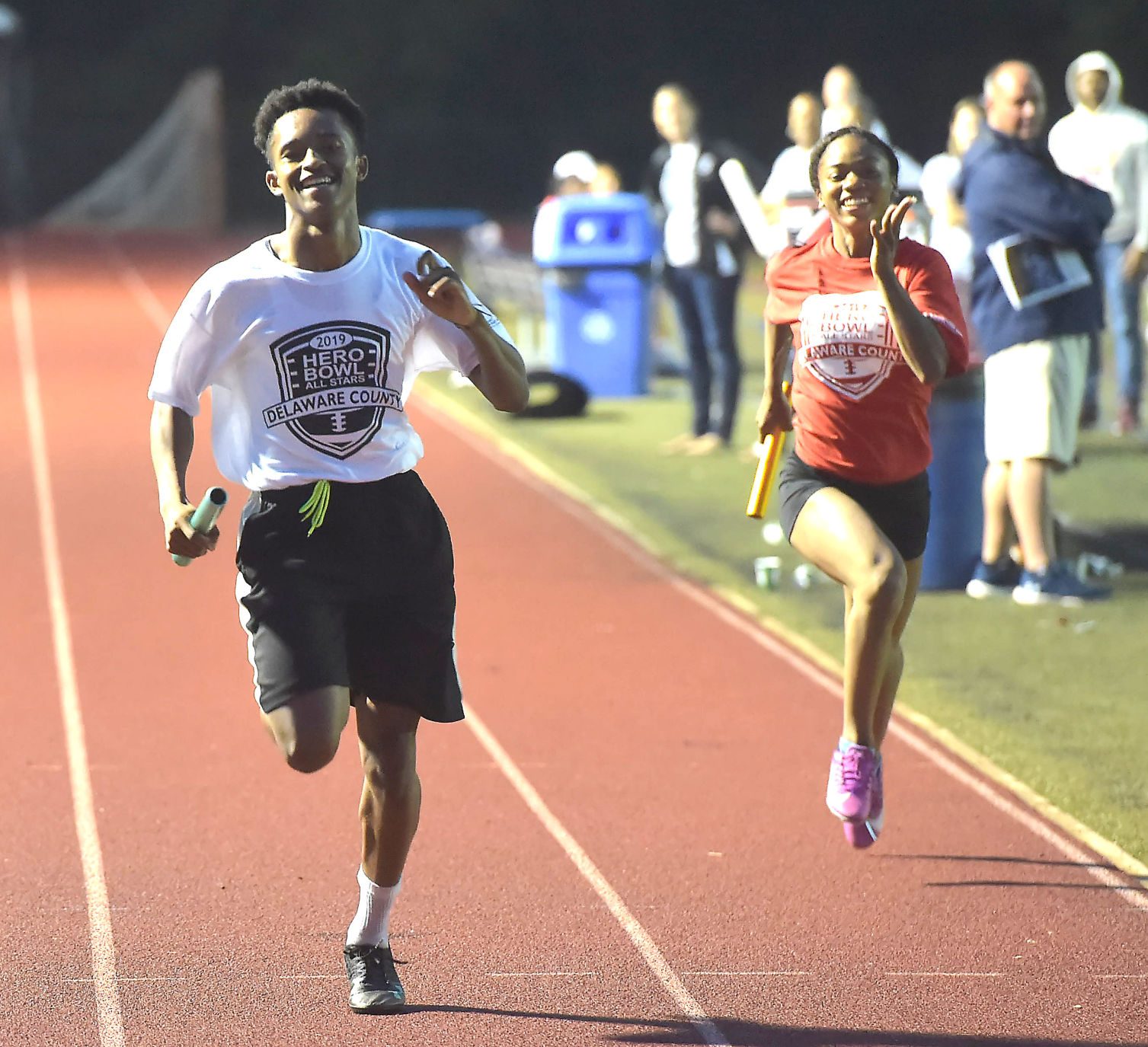 In addition to Athlete of the Year Timi Odunjo of Penn Wood, the All-Delco team includes:

Eric Albright, Garnet Valley: This was a breakout year for Albright. The sophomore burst onto the scene with victories in the 800 at the Whippet and Warrior Invitationals and took off from there. He turned in his career-best time (1:54.69) to take second at the Delco Championships, and then finished fifth at both the District 1 and PIAA Class 3A championships, the highest finish by a Garnet Valley athlete in the event since Ryan Reeser was second in 2003. He also was part of the 4 x 800 relay team that was eighth at the district meet and qualified for the state championships. Albright closed out his season with an eighth-place finish in the 800 at the New Balance Nationals.

Dominick Brown, Chichester: Bloomsburg is getting a good one in Brown. The senior ran the 200 and 400 and also competed in the long and triple jumps for the Eagles. The 400, though, was his specialty and he improved as the season went on. Brown ran the four best times of his career in the District 1 and PIAA Class 3A championships. He turned in a PR of 49.1 in the preliminary round of the district meet and followed that up with a fifth-place finish in the final. Brown capped his high school career with a sixth-place finish at the state meet, the first Chi athlete to medal at the state meet since Carrington Queen won the 110 hurdles in 2003. Zaquan Bruton, Chichester: For someone who had never competed in the high jump before this season, Bruton took to the discipline quite well. The sophomore turned in a personal best leap of 6-2 to finish second at the Haverford Invitational. Bruton followed that up with a second-place at the Caravel Academy Invitational and a victory at the Delco Championships. He placed 11th at the District 1 Class 3A championships.

Larry Coaxum, Garnet Valley: Coaxum was the best long and triple jumper in the county, and also one of the top high jumpers. The senior was the Delco, Central League and District 1 Class 3A champ in the long jump, winning the district title with a personal best leap of 23-0. His best event, though, was the triple jump. He was the Delco and Central League champ in the discipline, third at the District 1 Class 3A championships and fifth at the state meet. His outdoor best was 46-9, which earned him a gold medal at the Warrior Invitational. Coaxum will attend High Point University in North Carolina.

Mike Donnelly, Haverford High: The 2018 Daily Times Athlete of the Year in cross country ran all three distance races at the high school level for the Fords, but the 3,200 was Donnelly’s specialty. He turned in the best time of his career (9:34.82) and the best time in the event by a county runner to win the title at the Central League championships. The junior also won the metric two-mile at the Bullis Bulldog Invitational and was eighth in the event at the District 1 Class 3A championships.

Tony Graham, Ridley: The apple didn’t fall far from the tree. Like his father, Strath Haven All-Delco Drew Scott, Graham was one of the top hurdlers in the county for the past three years. This is his second straight year on the All-Delco team and he also was a two-time state qualifier in both hurdles events. Graham was the Delco champion in the 110 hurdles for the second year in a row and took second 110 and third in the 300 at the District 1 Class 3A championships. He earned the first state medal of his career with a fourth-place finish in the 300 at the PIAA Class 3A championships. Graham is undecided about college.

Daiyaan Hawkins, Haverford School: Delaware County has not seen a sprinter put up the kind of times Hawkins has posted since Leroy Burrell and that’s not hyperbole. The 10.46 he ran to win the 100 at the Inter-Ac League championships was just three-hundredths of a second off Burrell’s county record (10.43). In recent years, his 21.38 in the 200 is topped only by Cardinal O’Hara’s Corey Brown (21.18 in 2010) and Penn Wood’s Eric Futch (21.23 in 2012). And he has one more year at the high school level. The Aldan native and two-time All-Delco finished the season ranked second in the state in the 100 and third in the 200, according to pa.milesplit.com. He also teamed with Guillaume Laforest, Caleb Reed and Dan Whaley to set the school record in the 4 x 100 (42.48 seconds). Petey Lemmon, Haverford School: The two-time All-Delco was the only shot putter in the county to top the 50-foot mark this season and he did it twice. The first was a heave of 51-3¾ to win the championship at the Hoka One Henderson Invitational and then he threw 51-1 to take third at the Pennsylvania Independent Schools Athletic Association championships. Lemmon also finished third in the shot at the Inter-Ac League championships to pace the Fords to a league title. He will attend Tufts University.

Peter Lim, Episcopal Academy: Lim’s specialty was the pole vault and he was the best in the county in the event. The sophomore finished first in his first six meets including the Haverford Invitational, the Kellerman Relays and the Delco Championships, where he topped 13 feet for the first time in his career. Lim followed that performance with a PR of 13-6 to take third at the Inter-Ac championships. He closed out his season with a second-place finish at the PAISAA championships.

Owen Sherbinko, Springfield: The Cougars senior did not let surgery on his right (non-throwing) shoulder to repair a broken collarbone, which he suffered during a skiing accident, slow him down. Sherbinko worked his way back to be the top javelin thrower in the county. He finished in the top three in seven of eight meets and was second at the Delco Championships and third at the Central League Championships. Sherbinko will study automotive engineering at the Rochester Institute of Technology.

Kevin Thomas, Haverford School: The freshman will be someone to watch for the next three years. His 14.40 in the 110 hurdles ranked ninth in the state this season and his leap of 45-4 in the triple jump at the New Balance National, where he was second, was No. 24 statewide for 2019. Thomas won both hurdles events at the PAISAA championships and was first in the 110 hurdles at the Inter-Ac League championships.

Aiden Tomov, Haverford High: The Swarthmore-bound senior closed out his scholastic career with a bang. Tomov passed several runners to finish seventh in the 1,600-meter run at the PIAA Class 3A championships with a personal best time of 4:16.50. It was the first time he went under 4:20 in his career. Tomov also won the 1,600 at the Haverford Invitational and was second in the 3,200 at the Delco Championships with a personal best time of 9:38.24.

Chasen Wint, Haverford High: At 5-11 and 200 pounds, Wint does not have the physique of someone you expect to see in the shot put and discus, but he proved throughout the year that he could compete with the best in District 1. Wint was fourth in the District 1 Class 3A championships in the shot put (49-9¾, personal best) and fifth in the discus to earn a trip to the PIAA Championships in both events, where he was 11th in the discus and 16th in the shot, respectively. Wint, who also plays football, won both events at the Delco and Central League championships.

Ethan Zeh, Radnor: As anchor legs go, Zeh’s carry in the 4 x 800 for the Raiders at the PIAA Class 3A championships was a memorable one. He ran a 1:52.1 split to lead Radnor to a second-place finish with a school-record time of 7:43.48. Chris Belz, Luke O’Malley and Frank Brown also were part of that relay. Zeh was far from finished. He came back later in the day to take fourth in the 800 for his second medal in the event in two years. He was sixth as a junior. Zeh, who will attend Virginia, won the 800 at the Delco Championships with a PR of 1:54.32, and also captured the Central League 1,600-meter title with a personal best time of 4:23.91.

Chris Zimmerman, Episcopal Academy: Zimmerman finished second in the 400-meter dash twice this season. Every other time he was first, including the Delco and Inter-Ac League championships. He ran a personal best time of 48.48 seconds to win the event at the league championship. The Bucknell-bound senior ran 48.68 to win the county title in the 400, and teamed with Jack Bush, Malcolm Folk and Sam Wilson to set the school record in the 4 x 400-meter relay. Zimmerman will continue his career at Bucknell University.