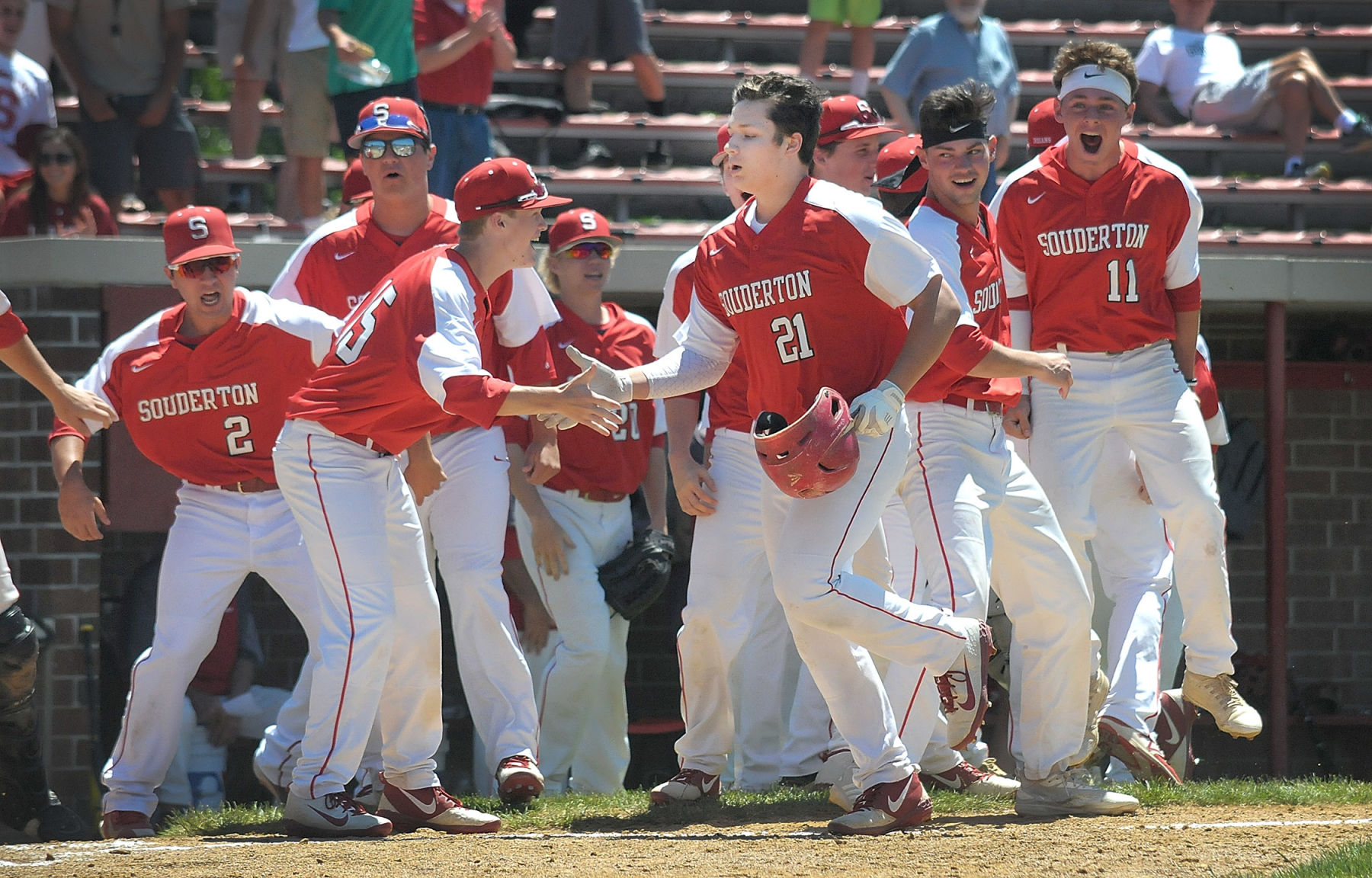 BOYERTOWN >> Jordan Morales is about to complete a senior season filled with dominant games and he saved his best for last.

The left-hander threw a complete game, three-hit shutout to lead Souderton to a 3-0 win over Neshaminy in the PIAA Class 6A state semifinals Tuesday afternoon at Boyertown Senior High School’s Bear Stadium.

“I think this is easily the best game of my career,” Morales, who is 4-0 this postseason, said, “just because it got us into the state championship. That’s one of our team goals that we wanted to do this year. I had a couple of goals myself — that was to beat North Penn and I did that. I was lucky enough to get this start, too.

“I was in a groove. I just tried to dominate and get my team a win at the end of the day. This was a big win for us. (Neshaminy) said that they’re really confident against us and we just used that as motivation and luckily we came out with the win today.”

Souderton’s Jordan Morales on the mound during the Indians’ PIAA 6A semifinal against Neshaminy on Tuesday, June 11, 2019. (Gene Walsh/MediaNews Group)

Morales struck out seven batters to no walks over seven innings. He went right after hitters throughout the game — only having two at-bats reach six pitches.

“I’ve watched him for three years now,” Souderton coach Mike Childs said. “He’s had a lot of great games, but knowing the situation and he’s been like this all season. Playing North Penn last year he got 10-runned. He said, ‘Coach I want it this year.’ He steps up, he beats them. He lost the first game to (Neshaminy), now granted we didn’t play defense behind him, but he stepped up and said, ‘Coach I want this one.’ At the end here I said, ‘Jordan, 72 pitches. You’ve got two more. Do you want to stay with this one or what do you want to do?’ I left it up to him and he said, ‘Coach I want this one. I trust all our pitching staff after this.’ For a kid like that, that’s just the way he is — super unselfish, 100 percent go-getter and watching him deal on the mound today against a very good team the way he did, definitely hats off to him.”

Morales faced the minimum three batters in five of the seven innings.

“That’s the best pitcher in the area,” Neshaminy coach Dan Toner said. “There’s no doubt about that. We’re telling our guys, ‘You gotta figure out something.’ It’s really hard to do. When a pitcher is lights out and he’s on, it’s really, really hard to beat him. He’s proven that. We knew he was one of if not the best pitcher around. We knew it was going to be a close game and it wasn’t a game where we knew we were going to come out and just hit the ball all over the place. He was absolutely lights out.”

Jacob Horton gave (1-5) Souderton all the offense it needed in the top of the second inning. He led off and ripped a solo home run over the left field fence to give the Indians a 1-0 lead.

“It was the second pitch,” Horton said. “I had a feeling he was going to pitch a curveball. I was waiting on it. Once he threw it I just teed off on it.”

Neshaminy catcher Joe Keleck stretches to tag Souderton’s Moses Clemens at home plate but Clemens is safe on the play during their PIAA 6A semifinal on Tuesday, June 11, 2019. (Gene Walsh/MediaNews Group)

The lead doubled to 2-0 in the fourth. With two outs and nobody on base, Moses Clemens singled to left field and advanced to second on an error. Dylan Kummery followed with a single to left and Childs waved Clemens home. The throw beat Clemens to the plate, but he managed to dive around the tag and give Souderton another run.

“I’m a very aggressive guy when it comes to base-running,” Childs said. “I’m going to put the throw on them. The throw was really, really good. Watching the play at the plate I wasn’t sure to be honest with you. Watching the outside, I saw the catcher sweep tag. For me, it could’ve went either way. With a guy on second, I’m always going to test the outfield arms. I absolutely sent him. If he got thrown out, I’ll take the heat for it, but we got lucky that play. To add a second run on the game was absolutely huge.”

The final run came in the top of the fifth. Conlan Wall hit a one-out double to knock (1-1) Neshaminy starter Dan Errigo out of the game. Wall advanced to third when reliever Jake Fehrle threw a wild pitch. Fehrle recorded a strikeout for the second out before throwing another wild pitch, scoring Wall and making it a 3-0 Indians lead.

#BASEBALL End 4 @SoudyBaseball 2, Neshaminy 0. Skins put 2 on with 2 outs B4 but @jordanmorales27 ends the inning with a strikeout. pic.twitter.com/AMoo74dMvi

The win sends Souderton to the state championship game, where it will face (1-2) Central Bucks South 10:30 a.m. Friday at Penn State’s Medlar Field at Lubrano Park. It’s the Indians second trip to the state final and first since 2007.

The District 1 champion Redskins’ season comes to an end with the loss.

“My first couple years in Neshaminy I had a five-year plan of what I wanted my team to be like,” Toner said, “and my captains and my seniors got me there in three years already. They established what I want out of this program. I’ve got a lot of young guys on the team. I’ve got a young pitching staff. Now these guys got a taste of some championships, they got a taste of going deep into the playoffs. They know what it’s like. They know how to get here. I can’t thank my seniors and the guys that were out here enough for establishing what I want at Neshaminy.”