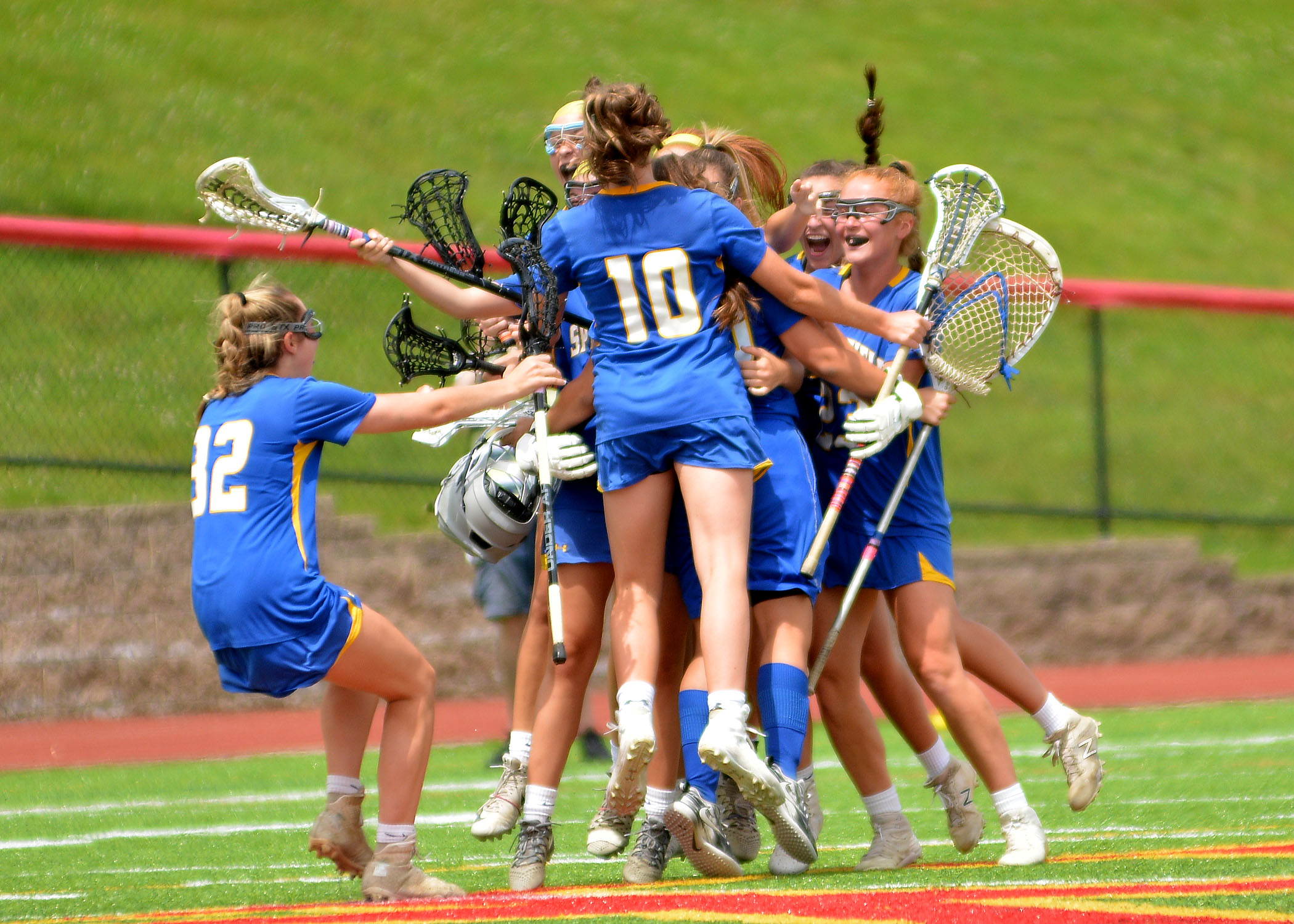 WEST GOSHEN >> It was like they had written a script that should have been called ‘Sister Act 3.’

Villa Maria Academy junior Bridget Finley was trying to match what her sister, Erin, had done a year ago by helping lead the Hurricanes to the PIAA Class 2A girls lacrosse championship.

On the other side of the field, Springfield junior Erin Gormley, who had watched her older sister, Aly, come out on the short end of a state championship score in 2014, had her heart on making sure the Cougars were not denied the ultimate prize for a fourth time in the 11 games played to determine a state championship played under the PIAA banner.

There may have been other plots or subplots, but the bottom line was that Villa Maria wanted to repeat its success over Springfield from the district final two weeks ago and turn that victory into a second consecutive state title.

Springfield had a different story-book ending in mind and, behind a strong start and determined effort in the second half emerged from West Chester East’s Zimmerman Stadium on the positive end of a 10-8 decision in earning the school’s first girls lacrosse state championship while ending Villa Maria’s one-year reign.

Aly Gormley, who played at Saint Joseph’s University before joining head coach Keith Broome’s staff at Springfield, was on the sideline to see her sister, who has committed to the University of Delaware, score three goals, add two assists and chip in with a first-half draw control for the Cougars (20-6).

“She was saying on the ride over here that it still hurt thinking about playing in the finals and losing (to Garnet Valley),” Broome said of his assistant coach. “And (assistants) Sarah (Geary-Damato) and Jackie (Eastman-Grenier) always talked about never having the chance to play for the state title when they were (Springfield All-Delco players).”

When Bridget Finley scored in the first minute of play Saturday, a hint of doubt might have entered the thoughts of Springfield fans who had suffered through three state finals losses — including a setback to Archbishop Carroll on the same field two years ago. A six-goal run, in which Gormley and Alyssa Long (five draw controls) scored twice, was a much better thing for any frazzled nerves.

By halftime, Finley had three goals for Villa Maria, but Gormley, Long and junior Olivia Pace all had two for Springfield, which was on top, 7-5.

Pace had her own story line as she got ready for the game. Her mother, the former Mitch McDermott, played at Ridley and Temple and is a former Green Raiders assistant coach. She was a member of the 1983 Ridley team that beat Marple Newtown, 4-3, in the district/state final, putting a halt to the Tigers’ three-year winning streak.

“She talks about that all the time,” said Pace, who has committed to Saint Joseph’s. “And she always mentions how that game was played at Springfield.”

Villa Maria had looked so strong in defeating Archbishop Carroll, 18-10, in the semifinal round Tuesday. The Hurricanes had relied on draw-control dominance and an attack that made the most of each possession.

“They have such a good offense,” Broome said. “So we wanted to at least be 50 percent on draw controls. And Belle (Mastropietro) did a good job with that, going up against Abby.

That would be Abby Walheim, who had eight of Villa Maria’s 10 draw controls after getting 15 against Carroll.

Mastropietro, whose two second-half goals gave her a game total of three, had four draw controls, giving Springfield an even split in that key part of the game.

“We never let up,” Mastropietro said. “We kept up the same intensity for both halves. We knew there were things we couldn’t do that hurt us in our last game against them.

“Dana (Mirigliano) had some big saves, and we were ready to go after groundballs.”

That was something Villa Maria head coach Allie Sweeney was not happy about.

“They were consistently a step ahead of us,” Sweeney said. “We didn’t play badly. They just outplayed us and outhustled us today.”

“Going in, we knew that they were going to be really aggressive,” Walheim said. “In our first game against them, we dominated 50-50 groundballs, but we didn’t do that today. That’s where they took over, and it was a key to the game.

“When they had the ball, they possessed it and took care of it. When we got it, we turned it over.”

Goals by junior Hannah Young and sophomore Margie Carden, the sophomore from St. Anastasia School in Newtown Square who scored five times against Archbishop Carroll Tuesday, got Villa to within 8-7 with 13:15 to play. That’s when Mastropietro and Gormley scored less than a minute apart and goalie Mirigliano turned away a strong Villa scoring chance to give Springfield breathing room.

Carden set the final score with 5:34 to play, then Cougars defenders Long, Julie Schickling, McKayla Cox, Gormley and Carli Johnston tightened up in front of their goalie while the attack players did a great job of keeping the ball away from the Hurricanes.

“We knew how good they were, but everyone did their job,” Mirigliano said.

Erin Gormley looked back at a conversation she had with her older sister — and assistant coach.

“She told me about she felt when they lost (in the final) and said she didn’t want me to have that feeling,” she said. “She’s always told me about working hard. And I’m glad she was here when we finally got to win this for the first time. I’m happy for all of our coaches.”