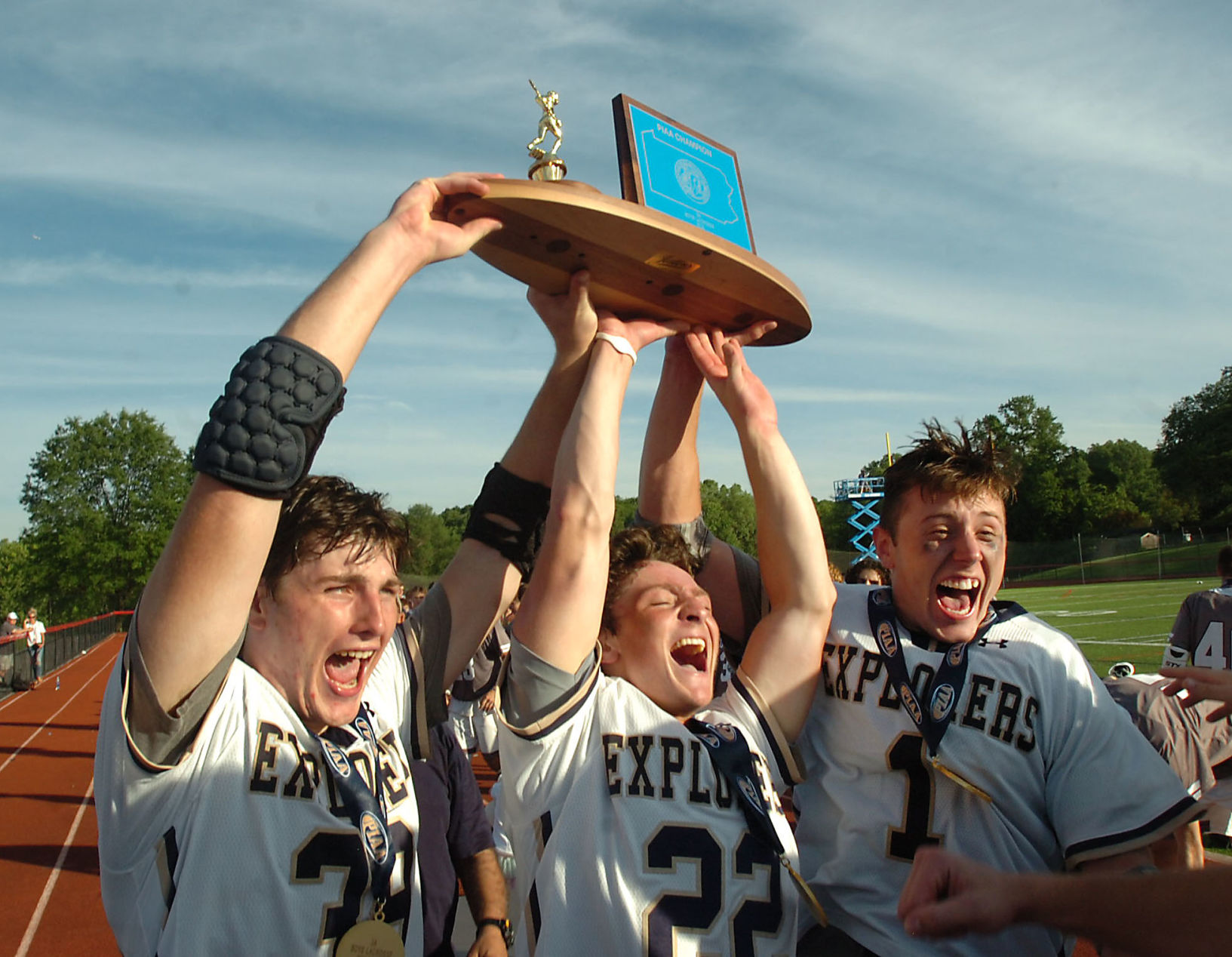 Clenching both arms he let out an exuberant and pointed yell of “nobody believed in this team.” From a standpoint of pure attrition, there were plenty of questions about the Explorers lacrosse team coming into the season.

It wasn’t a smooth ride either, but internally from the coaches down to the last man on the roster, a sense of belief started to build.

Things came together in May, the coaches gave their frank opinion on the team’s ceiling and after facing one last challenge, La Salle returned to the top of the state lacrosse mountain. Coar’s tie-breaking goal with 1:25 to go was the difference as La Salle topped longtime nemesis Conestoga 7-5  in the Class 3A final to win the program’s third PIAA title on Saturday at West Chester East.

“It was just that mentality you have to keep in the back of your mind,” Coar, who led La Salle with three goals, said. “You have to sacrifice getting blown up for a goal or two. That’s what hit me and I knew what I had to do.”

La Salle’s Rob Foster (17) celebrates his first-quarter goal with Mark Huntley (11) to put the Explorers on the scoreboard with 5:41 remaining in the quarter against Conestoga for the PIAA 3A championship at West Chester East on Saturday, June 8, 2019. (Pete Bannan/MediaNews Group)

The teams met back in April with Conestoga laying a 10-7 loss on La Salle as the Explorers were still trying to find the right pieces. It was a key game in the season because it showed La Salle it still had room to go and it lit a fire in the Explorers.

‘Stoga attackman Will Schnorr had six goals in that game and it was a turning point for an Explorers defense that was breaking in plenty of new starters. Saturday, Schnorr netted two goals but he was the focus of a determined defense.

“We had to switch everything, after that game we changed everything,” Explorers senior defenseman Ben Rivera said. “It was all about locking off (Schnorr). He’s a great player, plays well off the ball and has a nice shot. Once we locked him down it was easier to rotate around him.”

Schnorr scored the game’s first goal but La Salle rallied to take a 2-1 lead at the end of the first quarter. Senior Shane Osborne had the second goal off a slick feed from Danny Mallee, giving La Salle a lead it would hold until the fourth quarter.

Osborne, as a captain, felt the weight of trying to meld this group into a contender but credited the coaching staff for setting the right course.

Osborne also noted there are plenty of guys at La Salle good enough to play that don’t get on the field. For a number of the seniors, this was their one year to make something happen.

It was an undeniable motivator, especially for someone like senior Chase Rondeau.

“I can’t even put into words how much we’ve grown, the grind we put in together is unbelievable,” Rondeau said. “I’m one of those guys so it feels amazing. To do it against a team that beat us earlier and made us feel pretty bad about ourselves earlier, it’s the best feeling in the world.”

La Salle’s Danny Mallee (21) blocks a Conestoga defender as Zac Coar (3) brings the ball out from behind the goal in the first quarter of the PIAA 3A championship at West Chester East on Saturday, June 8, 2019. (Pete Bannan/MediaNews Group

Coar scored twice in the second quarter to give La Salle a 4-1 lead at the half.

The Explorers built a 5-2 lead on a transition goal by Chris Mockaitis early in the fourth quarter. It was their only score outside of a set offense and when La Salle had the ball, patience was the name of the game.

“They were playing aggressive on the shorties so we knew had to get them the ball behind, work to set some picks and try to get our guys locked up by the long poles some looks,” senior midfielder Grant Pinto said. “I was setting a lot of picks, trying to hold the ball or transfer it. I think we got our best offense when we transferred it from behind.”

Conestoga found a rally, showing a lot of heart in a game it trailed for most of three quarters. Goalie Mick Lee was excellent in keeping the Pioneers in striking distance.

‘Stoga scored three goals in a four minute span, capped by a long pole howitzer from All-American Scott Smith to tie things up 5-5.

La Salle called a timeout, Rondeau said the entire defense took a deep breath and the coaches told their guys to fall back on their training. The defense got the ball back and that’s when Coar went to work.

Lining up for a faceoff against PJ Hewitt with 1:25 left, La Salle senior John Giuliani knew a win would go a long way to sealing up the game.

“I wasn’t really nervous,” Giuliani said. “I trust my brothers on the wings. Some pretty special things can happen when you’re not playing for yourself and you’re playing for your teammates.”

Giuliani won the draw and Danny Mallee iced the win with a goal with 25.6 left on the clock. The final seconds wound off and La Salle hoisted a trophy for the first time since 2013.

“We always believed in each other and that goes for this game too,” Rondeau said. “Even when it was 5-5, we looked each other in the eye and said ‘we can do this.’ I got a little kick save in and I thought ‘we’re going to do this.’ It was a little scary but I knew we were going to do it.”

Suter stands tall in net for La Salle in PIAA 3A final
Back to back: Shanahan runs past Hershey to win 2nd straight state title