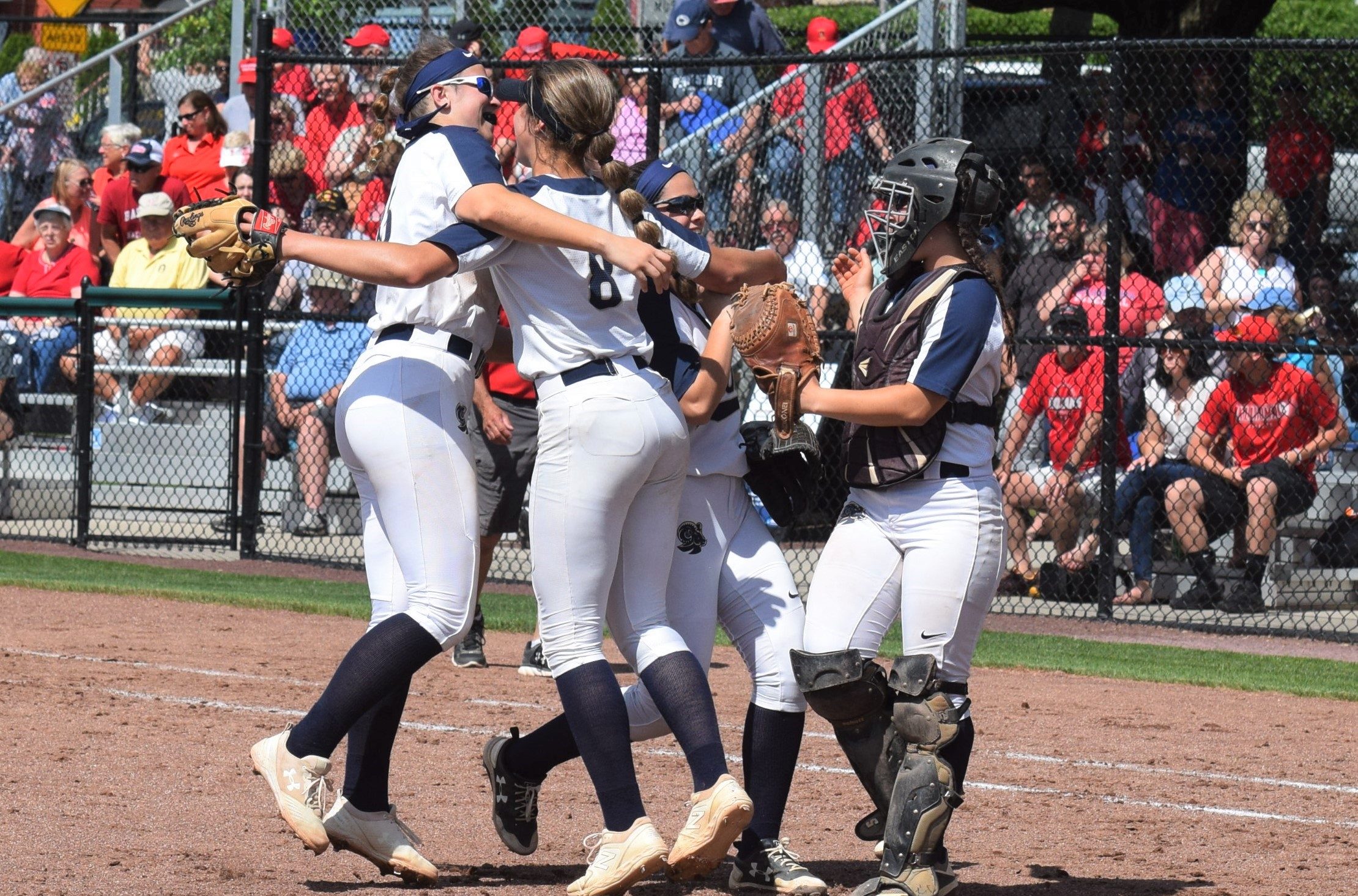 BETHLEHEM >> It would sound funny to call the Spring-Ford softball team an underdog.

But up against a Parkland program that is a District 11 powerhouse and was a whisker away from winning the 2018 PIAA championship, the Rams weren’t the firm favorites they’ve been in every other outing this season entering Thursday’s PIAA Class 6A quarterfinal.

Regardless of the roles cast, Spring-Ford would need the expected – and some unexpected – performances to knock off the reigning state finalist Trojans.

That’s exactly what it got.

Sophomore Bri Peck was at her finest in the circle and provided a two-run single in the Rams’ pivotal four-run second inning, while senior Logan Bonewitz led an error-free defensive effort that sent Spring-Ford to a defining 4-1 victory over Parkland at Moravian College, earning it a place in the state Final Four.

Spring-Ford outfielder Bridget Sharkey makes a catch at the warning track in the sixth inning against Parkland in a PIAA 6A quarterfinal Thursday at Moravian College in Bethlehem. (Austin Hertzog – MediaNews Group)

Spring-Ford advances to face District 2 champion Hazleton, which ousted District 1 champion Downingtown West via walkoff home run in eight innings Thursday, 1-0. The semifinal will be Monday, June 10 at a site and time to be determined (likely in the Lehigh Valley). It’s a rematch of a 2017 semifinal, won by Hazleton 8-5.

The Pioneer Athletic Conference champion Rams, who defeated St. Hubert 10-0 in five innings in the first round, improved to 26-1 with a textbook postseason victory – make the most of few chances, get great pitching, play perfect defense – and did it against a very talented Parkland team (25-3).

Peck, who last week was named Pa. Gatorade Player of the Year, lived up to her billing with a complete-game effort where she allowed one run on seven hits with six strikeouts and a walk.

She also did it at the plate with her two-run single in the second inning that backed up the RBI hits of seniors Julia Heine (double) and Maddy Little (single) for a 4-0 lead on Parkland two-year starter and Kutztown commit Kelly Dulaney (6 IP, 7 H, 4 ER, 2 K).

Spring-Ford’s Bri Peck bloops a two-run single over the right side against Parkland in a PIAA 6A quarterfinal Thursday at Moravian College in Bethlehem. (Austin Hertzog – MediaNews Group)

Peck’s blooper into shallow right field wasn’t her prettiest hit of her season, but it could have been her most important.

“It was such a ‘her’ thing to do,” senior outfielder Bridget Sharkey said. “She makes everything work somehow and that’s a great example of it.”

Even her teammates don’t know how the unflappable Peck does it.

“I have no idea what goes on in her head,” Sharkey said. “She is the most outgoing and so light-hearted, you can’t even tell how nervous she is any time. She’s always dancing, I don’t think anything gets to her, or at least she doesn’t show it.”

Bonewitz, making her first start since April at second base with Heine playing catcher due to the absence of starter Maddy Cortino, might have been feeling more nerves than Peck, but they didn’t show either.

Spring-Ford second baseman Logan Bonewitz throws to first for an out against Parkland in a PIAA 6A quarterfinal Thursday at Moravian College in Bethlehem. (Austin Hertzog – MediaNews Group)

The senior was the Rams’ most active fielder with nine outs, which proved to be a good thing.

“I was nervous at first but after the second inning it got better, after six balls were hit to me,” Bonewitz said. “It was good, it was nice to have that confidence booster and it helped the rest of the team, too.”

“It was amazing,” Peck said of Bonewitz’s play. “She did so well.”

She wasn’t alone: Sharkey made a running catch at the warning track on a Dulaney blast that had the look of a two-run home run off the bat in the sixth inning.

“I had three heart attacks on the way there, but other than that … I had my center fielder, Maddy, telling me – we practice a lot of communication in there – so I knew my surroundings,” Sharkey said.

With runs going to be at a premium in a matchup of Peck vs. Dulaney, Spring-Ford couldn’t have asked for anything more from their four-run second.
Ashley Della Guardia led off with a single through the left side, was advanced by Madi Walsh and driven home by Heine’s double over the left fielder’s head.

An out later, slap-hitting Little worked a long at-bat fouling off pitch after pitch before driving an RBI single through the right side to score courtesy runner Karissa Potteiger. Leadoff-hitting outfielder Noelle Reid (2-for-3) followed with a single and stolen base for runners on second and third, leading to Peck’s two-out Texas leaguer for a 4-0 lead.

“They had some great hits. They have really great hitters,” Dulaney said of the Rams.

Things got very interesting in Parkland’s top half of the third. Despite Giana Schick’s (2-for-3) leadoff double, Peck struck out Nos. 8 and 9 in the Trojans’ lineup. Leadoff hitter Carolina Rivera (2-for-4) hit a grounder to shortstop Jules Ryan right as the baserunner was passing. The ball hit Schick and appeared to be runner interference to end the inning.

After a multiple-minute conference and both teams off the field, umpires ruled the ball Ryan’s glove before it hit the runner and Parkland was back in business with runners on the corners. Nicole Klass answered with an RBI single to get the Trojans on the board.

“We all thought she was going to be out and then going back out there was kind of hard,” Bonewitz said. “And they scored the run from it. But we came back from it.”

Naturally, Peck was unaffected as she got an inning-ending liner to Bonewitz.

“When they said we had to go back out, I was just ready to pitch again,” Peck said.  “I just knew my team would back me up. I was comfortable pitching overall.”

Dulaney quieted the Rams’ bats after the second – they went down in order in three of their last four at-bats. The Parkland bats were louder – they had threats in the fourth and fifth innings but got nothing to show for it, the fifth ending on a double play via line out to third baseman Jules Hughes and throw to second for Bonewitz to apply the tag.

Parkland got a runner on in the seventh, but Peck induced a grounder to Bonewitz – who else? – for the final out.

NOTES >> Parkland and Spring-Ford apparently put their seasons on the line against each other every five years: in 2014 and 2009, the Trojans ended the Rams’ season. … The 2017 semifinal between Spring-Ford and Hazleton was played at Parkland High School.

Maddy Little hits an RBI single in the second inning against Parkland in a PIAA 6A quarterfinal Thursday at Moravian College in Bethlehem. (Austin Hertzog – MediaNews Group)