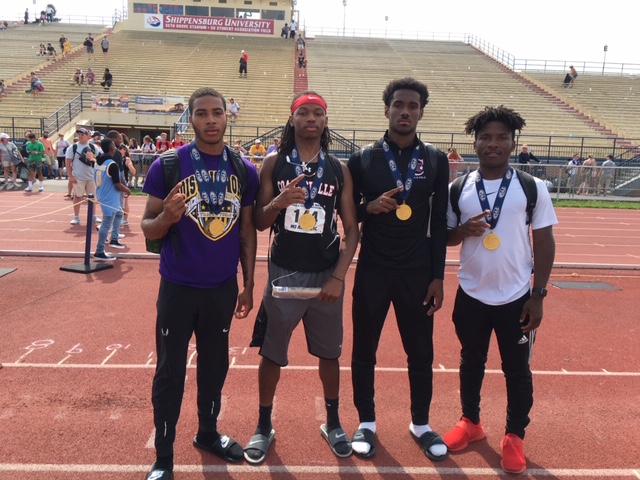 Mulhern, a former swimmer who finished first in the PIAA cross-country state championships last fall, said, “I only raced one other 3,200 before today and did just enough at Districts to qualify. Today my goal was to break 10:30. My coach told me he knew the other girls’ times and told me to stick with them and roll with them as long as I can.”

“This field was so stacked,” Mulhern said. “It feels amazing. I didn’t think I would be able to finish it off. It just feels amazing to be here.

“I ran cross country this year and had a really good season. I was a swimmer for a long time and had a lot of endurance built up. It’s definitely where my strength lies, not in speed.”

Coatesville’s Dymere Miller, who anchored the Red Raiders’ 4×100, said of second-place Central Dauphin East. “They had all the hype coming in with their record-breaking race. We just came in and we executed with our handoffs. Being the underdogs is the best thing you want coming into a meet like this.”

Central Dauphin East, which ran its District 3 meet at Seth Grove Stadium, posted a 41.10 during its respective District meet. The number sent shockwaves throughout the state as the team instantly became the favorite entering this week’s state meet.

Miller knew all about the talk surrounding the team and when he made the final turn and headed to the line, he put his finger up to his mouth to silence the crowd. There were some cheers, some oohs, and jeers, but at the end of the day Coatesville was the champion.

“We couldn’t wait to break that record,” Miller said.

Prior to the District 1 meet, Coatesville faced adversity as it lost the third leg of its 4×100 team. Camari Stocker filled in for an injured runner and quickly made his presence on the team felt as he helped them reach States and set a new mark in the event.

“We were just working hard at practice with our handoffs,” Miller said. “We were calm and confident. We had a filler, but they just pushed through it and ran really well for us.”

Overall, the Coatesville boys finished second in the team standings, and featured another state champion in high jumper Ousman Kamara, whose winning mark was 6-8.

When Kamara landed on the mat after his winning jump, he quickly jumped up as the crowd cheered, and pointed to his mother (Cynthis Nollie) and coach (Carl Smith) as they celebrated the jump that made him the PIAA state champion in the high jump.

“My coach just told me I could do it if I stayed within myself and just keep jumping,” Kamara said. “I got it on my third attempt. Last year I came up short and to get this now means a lot. I just couldn’t have done this without my mom and my coach.”

Also on Saturday, Bishop Shanahan’s Jonah Hoey competed in the 1,600 for his chance to reach the podium. After a morning with clouds and cool breezes blowing through the stadium, the 1,600 opened with the sun directly above the field with no clouds in sight. It made an already difficult field that much more challenging for Hoey, who finished second in the event last year.

“The goal today kind of like every day is just to win, but I was just happy going out there and trying to compete,” Hoey said. “I would have liked to win, but I’d say it’s more about competing and growing as an athlete.”

“It’s something a lot of people shoot for, but I got second last year and it’s hard not to be a little disappointed,” Hoey said. “I’m going to keep my head held high and know I gave everything I had out there. I got a pretty good PR. There a definitely some good takeaways from this year.”