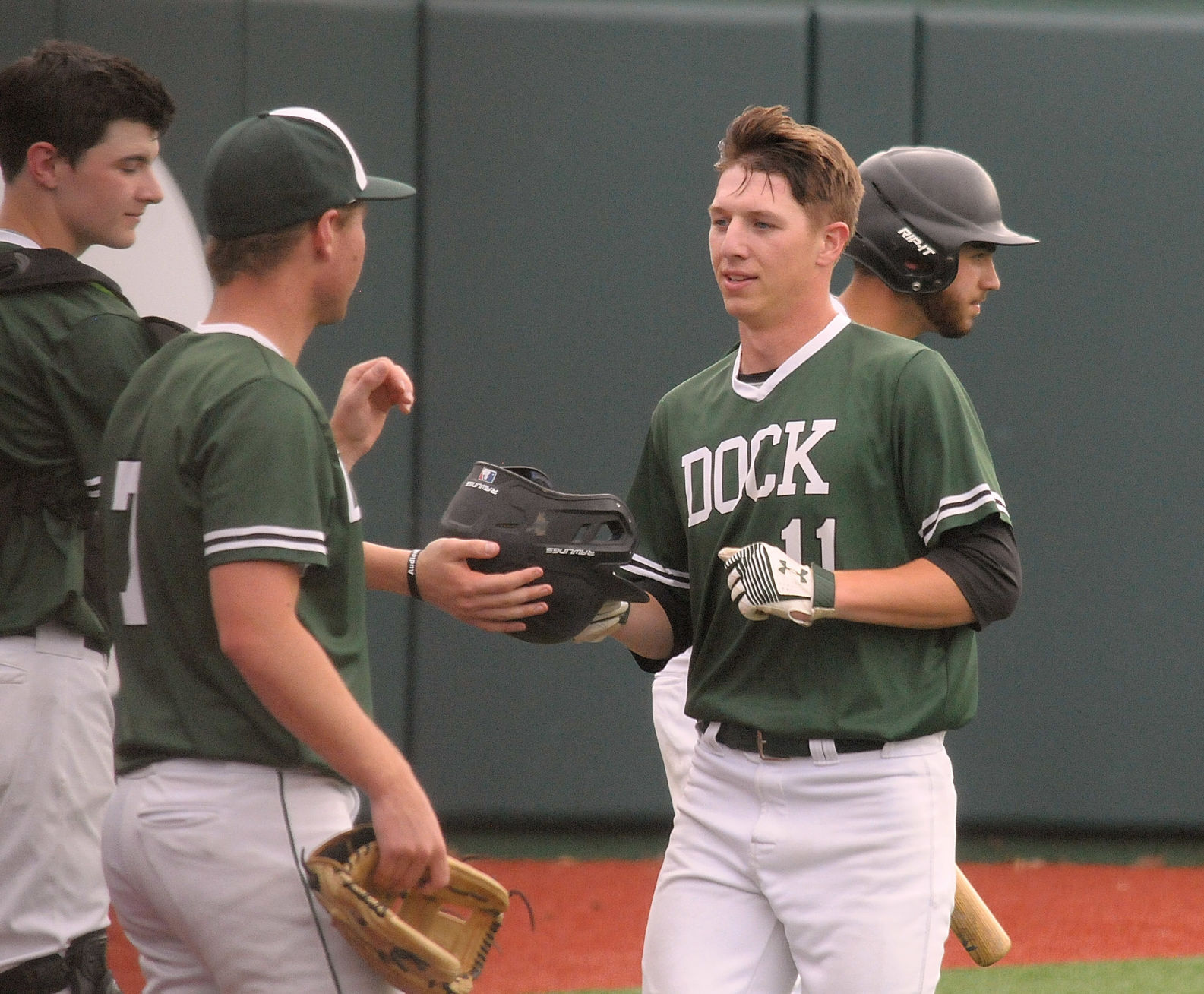 Dock Mennonite’s Nolan Bolton is greeted by teammates after scoring a run in the first inning against MaST Charter in the District 1-2A final on Thurday, May 23, 2019. (Gene Walsh/MediaNews Group)

PLYMOUTH >> Dock Mennonite’s upperclassmen had been there enough to know it’s never easy.

Sure, it looked like the Pioneers were going to blow open their District 1-2A baseball title game against MaST Charter after a loud first inning, but that’s not how it played out. But when a team has won four straight titles, it has the benefit of experience and knowing how to roll with the punches.

Dock didn’t run away with the game, but it didn’t stop the Pioneers from hoisting their fifth straight district title after a 3-2 win over the Panthers on Thursday at Villanova Ballpark.

“It was going to be a back and forth battle,” Dock senior Nolan Bolton said. “They had some runners on, we knew if they got one run it was a game and if they got another run, it was a tie game so we had to come up big. We played a lot of tight games throughout the year so that kind of prepared us for this.”

Dock Mennonite’s Mason Fisher connects with a pitch during the District 1-2A final againstMAST Charter at Villanova Ballpark on Thursday, May 23, 2019. (Gene Walsh/MediaNews Group)

Bolton usually closes games on the hill but he got the start on Thursday and ended up grabbing the win after pitching four-plus innings. He also went 2-for-2 at the plate with an intentional walk, drove in a run and scored another as he and his senior classmates completed the four-peat.

After Bolton walked the leadoff batter in MaST pitcher Lance Farlow, he got the next three out and sent the Pioneers to the plate. Top-seeded Dock wasted little time as senior Mason Fisher belted a triple to start off the inning.

A one-out double from Bolton scored Fisher and Bolton would later score on a wild pitch, bringing the score to 2-0. Clark Baker doubled then came home on Mike Moyer’s RBI single to give Dock a 3-0 lead and the thought of a breakout offensive day.

“We were focused all day and came into it like it was any other game,” Dock’s Brody Moyer said. “We put bats on the ball and just did the best we could.”

Dock had the bags loaded in the second as well, but Farlow decided enough was enough. The MaST Charter righty escaped the jam, then didn’t give up another run all day. While the Pioneers sprayed a few more hits, Farlow made sure his guys had a chance to stay in the game.

“They did a good job, their guy did a good job mixing both his pitches with the fastball and curve and added a changeup in there once and a while,” Dock coach Jim Smith said. “He did a nice job keeping us off balance. We made some adjustments, hit the ball hard, but it kept finding gloves.”

Smith also cited MaST first baseman Christian Gessley, who made a nice play on a pop-up in foul territory and fielded his bag well on a few slightly off-line throws.

Farlow picked off a runner at first base for the second out of the third inning and made his best play of the day in the fourth, charging off the mound and making a sliding grab on a pop-up well into foul ground in front of his bench. On top of that, he added a single and a triple to his line offensively.

“He had a heck of a game pitching and fielding-wise,” Moyer said.

Dock Mennonite’s Nolan Bolton on the mound against MaST Charter during the District 1-2A final on Thurday, May 23, 2019. (Gene Walsh/MediaNews Group)

MaST got its first run in the third inning when Sean Moran’s sac fly plated RJ Loftus. Bolton eluded further damage in the inning, ringing up Matt Kaelin with the bases loaded to hold a two-run lead, but the Pioneers knew it was a game.

Bolton singled in the fourth, advancing to third on a steal and wild pitch, but Farlow got a strikeout to end the inning and the Pioneers wouldn’t put another runner on the rest of the game. Still, Smith felt his guys hit the ball hard all game and he didn’t think it was a bad offensive showing but more good defense by the Panthers.

“It’s still stressful, I don’t think I sat down the entire game,” Smith said. “It helps when you jump out in the first inning, shut it down 1-2-3 basically then go and put a three-spot on the board.

“Their outfield did a good job to adjust and make plays and guys on the infield were picking balls left and right.”

Moyer came in to relieve Bolton in the fifth and pitched the rest of the game to pick up the save. The righty said Bolton gave him a few pointers but mostly, he just threw strikes and retired seven of the first eight batters he faced.

Even Farlow’s leadoff triple in the seventh wasn’t a huge deal and Moyer said he just told himself that run didn’t matter when Farlow came in on Anthony Castillo’s RBI groundout.

“This year, it was a lot closer type of group than we’ve had in previous years,” Moyer said. “We have a lot of upperclassmen, we’ve been through it and we wanted to get this one.”

Dock’s win also sends the Pioneers to states and the senior class is looking to make a run through that bracket before they call it a career.

“I’m looking forward to the next level and excited to go, but right now I have to embrace my time here and see how far we can go with this team,” Bolton, who is heading to Liberty next year, said. “Looking back on freshman year from now, it was very different but it’s been good.”