Walheim comes through to lead Villa to another title 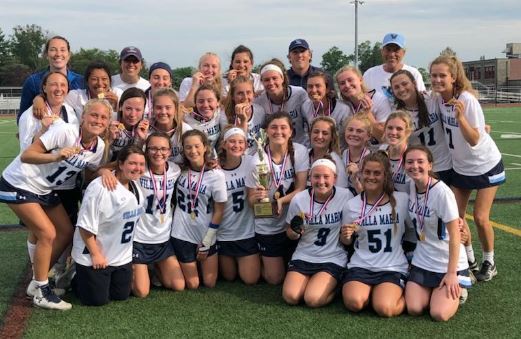 HAVERFORD — It was a moment perfectly suited for Abby Walheim

As Villa Maria Academy’s multi-sport senior star would explain, the play to win a second straight District 1 Class 2A lacrosse title was not designed with her in mind.

“We had this play for Bridget Finley, who is a left-hander and is tough on the right side,” said Walheim, who is bound for Villanova in the fall. “That’s pretty much an iso for her. Everyone clears to the right side and she goes left and tries to use us for a pick. We tried it, but it didn’t work. We then worked the ball back up top to Hannah Young, and we were going to have her do something, but then we kind of revamped it.”

Walheim was the best player on the field Thursday, alongside Springfield standout Belle Mastropietro, who helped the Cougars jump ahead late in the second half with her strong defense and clutch goal scoring.

Walhem, too, had a tremendous second half, on the draw and attack, and everyone in attendance anticipated that she would make a play in the final seconds.

Following a timeout, the Hurricanes moved the ball around until Walheim appeared in the lane, made a swift move and charged to the net, firing a laser past goalie Dana Mirgiliano with 18 seconds left. Walheim won the ensuing draw, and Villa Maria sealed a 9-8 victory in the District 1 final.

“I guess it worked out for me,” she said.

Moments earlier, it appeared that Springfield would hold for the last shot, but a costly turnover gave Walheim and the Hurricanes the chance to end things on their terms.

Villa Maria and Springfield could meet again in the PIAA tournament, which gets under way next week. Thursday’s battle was a classic, one that VMA assistant coach George Hopson likened to a boxing match.

It was exactly the type of competition you might expect from the top teams in Class 2A.

“We’ve been in this position before, especially against Springfield. I remember when we played them at the beginning of last year and it was a battle, they were aggressive,” Walheim said. “We knew what we were getting into, and we knew that we had to outwork them.”

Springfield’s defense made a key stand with 3:20 left in regulation. Villa had maintained possession for nearly three minutes, but Mirgiliano came up with a few big saves and the defense of Carli Johnston, Casey O’Connor, Julie Schickling, Makayla Cox, Emma O’Connor and Abby Peichel clogged up lanes and disrupted shot attempts. Springfield set up shop on the other end, chewing as much clock as possible, but a pass up top to All-America Alyssa Long was bobbled. Once the ball hit the ground, Villa Maria pounced and regained possession with 1:14 to go.

“We wanted to look for a good shot, even if it took the rest of the time,” said Mastropietro, who gave the Cougars an 8-7 lead with 9:39 to play. “We wanted to take our time and look for those high-percentage shots, rather than try and force it.

“I mean, it’s frustrating, but things happen. I thought we played a great game. Dana was amazing, she kept us in it the whole time, but it stinks we couldn’t win.”

Springfield led 3-2 at intermission when Erin Gormley won a draw, sprinted to the net and unleashed a bullet past goalie Kyla Branco (eight saves). The goal came a mere 10 seconds after Villa Maria evened the score on a goal by Jacki Murray. Springfield had a 2-0 lead at the 8:58 mark of the first half.

Villa showed its championship pedigree to begin the second half.

“Our struggle in the first half was … they were outhustling us and they were winning a lot of the 50-50 balls,” Walheim said. “I think in the second half, we had to put a fire under us and go out strong because we knew this would be our last time to win a district championship and we wanted it. As a senior, it really means a lot to win it again.”

When the Hurricanes have a difficult time gaining momentum on attack, their defense kept them within striking distance.

“We were definitely struggling to execute and take care of possessions,” Walheim said. “On defense, I thought it was really nice that we were talking and everyone knew what had to be done. Even when they took a shot, and got the ball back, we had to keep our heads up and stay composed. I thought we did that really well.”

Walheim led Villa with three goals, and Margie Carden and Sarah Delaney each tallied a pair.  Mastropietro registered a hat trick and one assist, while Gormley tossed in two goals for Springfield.