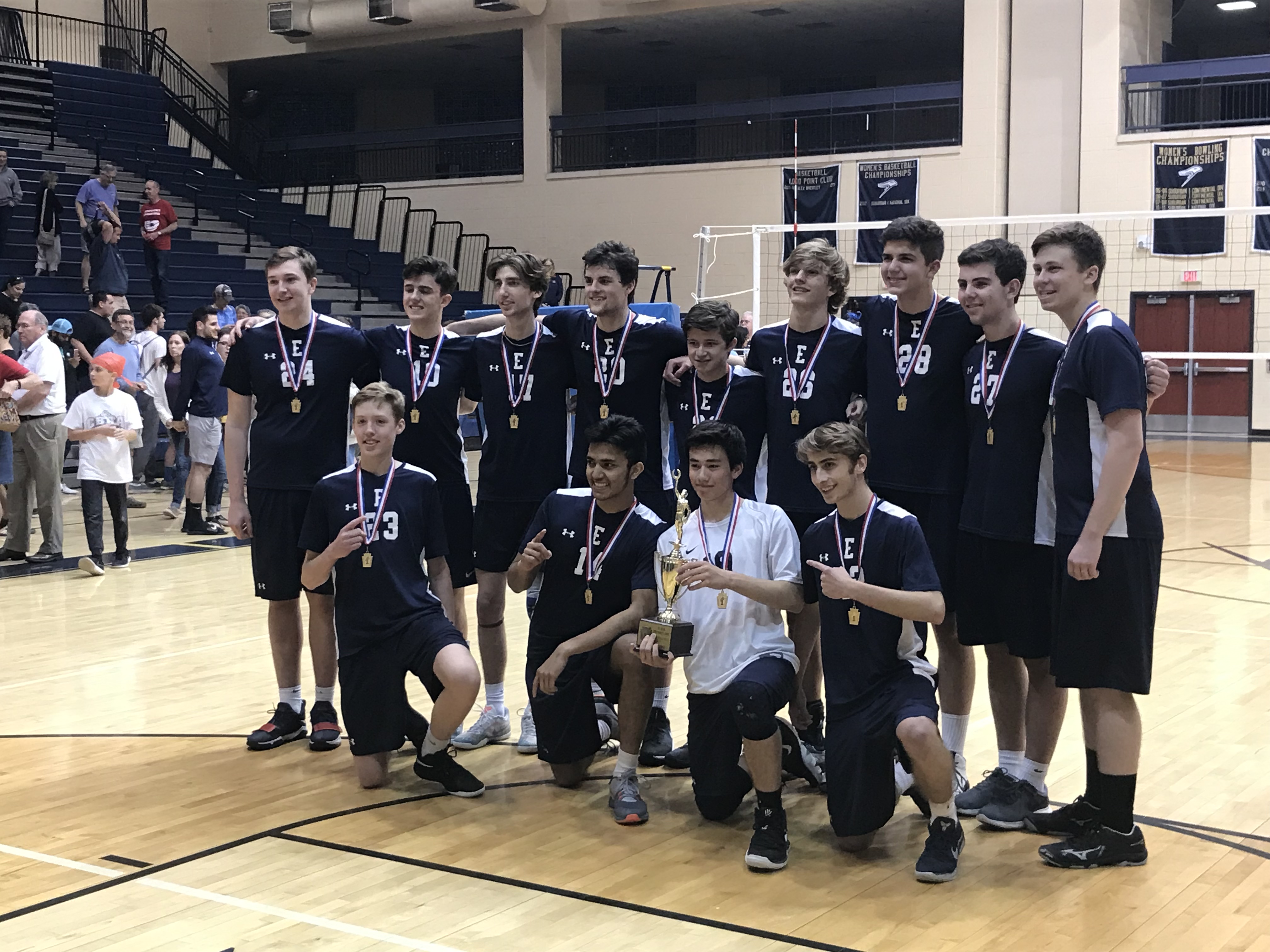 The Central Bucks East boys volleyball team pose with the District 1-3A championship trophy after defeating North Penn 3-0 in the final on Thursday, May 23, 2019. (Mike Cabrey/MediaNews Group)

NORTHAMPTON >> Dylan Colbert leapt to reach the set from Steven Storm then Central Bucks East’s all-state outside hitter blistered a shot that hit the floor just inside the right sideline.

It was the final exclamation point to an impressive performance for the Patriots boys volleyball team, one that put it on top of District 1 for the first time in 30 years.

“That’s something special to be able to look at that banner couple months from now and see 1989 and 2019,” Colbert said. “It’s something that I’m never going to forget every single time I come back into that gym.”

“It’s awesome,” Colbert said. “It’s all full circle cause last year we had a bunch of games that where running really tight, down to the wire, then to come out and have everyone performing on the same page then have it all end with that combo. All team effort, can’t do it without the other five guys out there with me.”

North Penn, in its first district final since its last title in 2000, tried to create a better outcome against their unbeaten SOL American Conference rivals than the pair of three-set losses the Knights were handed in the regular season. But the Patriots set the tone in the first set, jumping out to a 7-1 lead and proceeded to deny North Penn any chance to get back in it, rolling to a 13-point win and repeating double-digit victories in the next two sets.

“We would of had to play fresh-from-the-dentist clean to stay in that match,” North Penn coach Ryan Genova said. “Very impressive, nothing but impressed by CB East and what they’re able to do.”

For the Patriots (22-0), the district title was the program’s first since 1989 but East has been on a steady climb in recent seasons to this moment — reaching the semifinals in 2017 then last year falling in the final to Council Rock North.

“We had hopes that since we made it last year we were going to make it this year again,” Storm said. “And as soon as we played every team once and we beat them and I think we only lost three sets in total this whole season — or maybe four — that’s kind of when you know that you have a great season.”

Despite the disappointing end, North Penn still had its best district finish in 19 years and with upset wins over No. 3 Council Rock North in the quarterfinals and No. 2 Pennsbury in the semifinals the Knights earned their first PIAA berth since placing third in 2015.

“We peaked,” Genova said. “We peaked at the right time to get ourselves to the next stage. So, very happy about that for sure.”

“We kind of knew that we got swept last time so there’s a little bit of nerves being in the championship game, there’s some nerves in there,” Coles said. “We definitely did not play the best that we’ve played the last few weeks at all. We still have a good shot, we have a couple days to work on some things we need to work on for our next game on Tuesday and we’ll be ready to bring it then.”

“We got a couple days to prepare, everybody’s going to be giving it their all,” Colbert said. “We’ll end up playing a great team in the first round or throughout, so we’re looking forward to the challenge. Yeah, excited.”

North Penn was level with East once in the first set at 1-1 before the Patriots posted the next six points. The Knights could only cut the margin down to five from there — the last time at 11-6.

“They don’t kill you with their serves, they kill you with their side-out game,” said Genova of CB East. “It’s just pass, set, kill. And that’s high-level volleyball. And then they will put a serve in and they put up a big block, a big disciplined block. And if you get past the blocker, they’re going to dig you, their libero (Ryan Figus is) very quick, he’s quick to go to the floor and quick to get back up. And so, yeah, it’s an all-around fantastic team.”