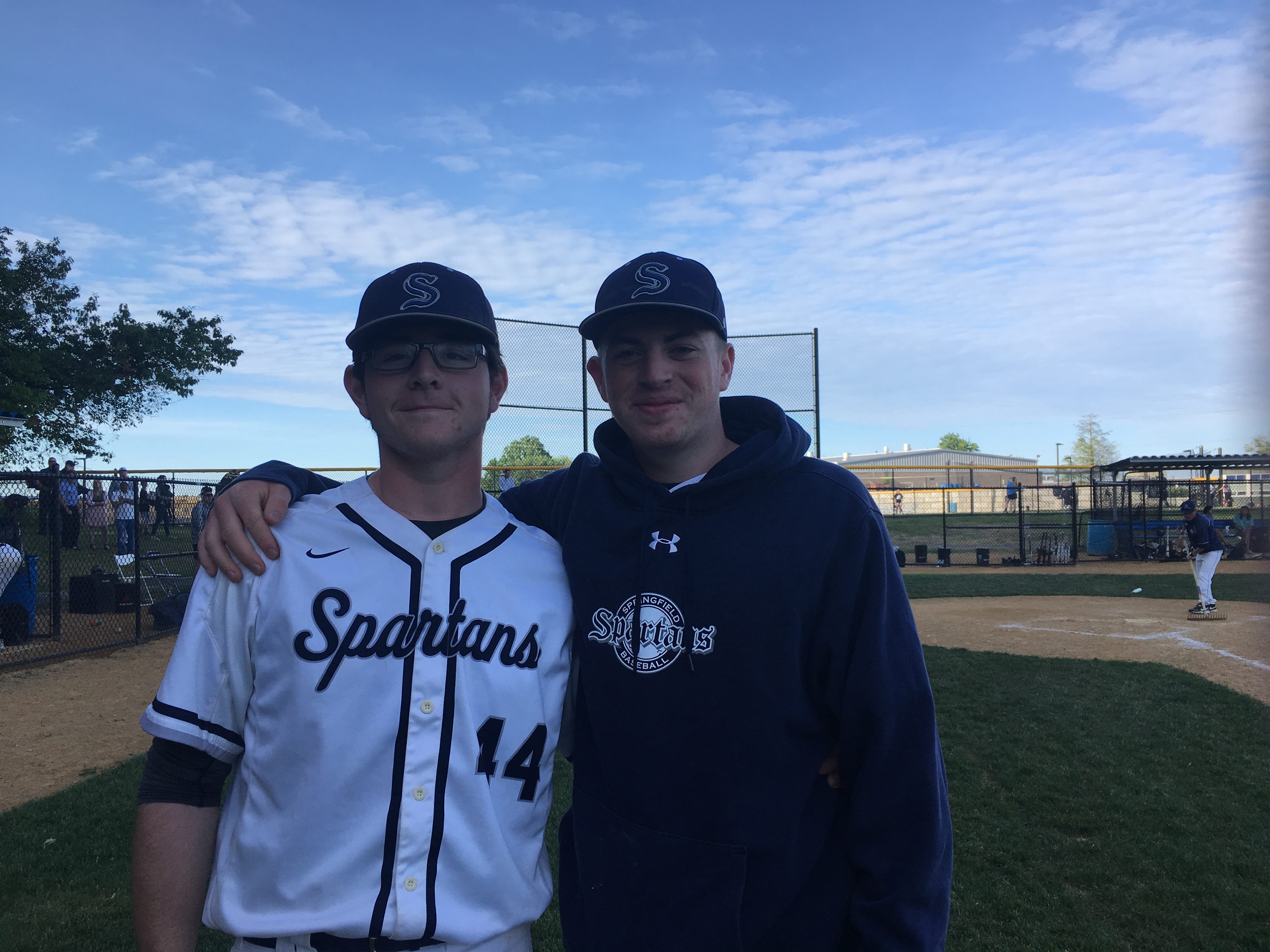 Springfield Township senior Max Perry sent the first pitch he saw flying out of the park, although it drifted foul, it was a firm tone-setter by the Spartans. On the eve of their biggest game of the season, they spent it sharing a team dinner and most of the players came to the field Tuesday wearing a traditional postseason haircut.

The No. 2 seed Spartans were eager to erase the bad memories of last year’s playoff opener and they did so with emphasis, knocking off No. 3 Pope John Paul II 10-1 in the District 1-4A semifinals Tuesday.

“Last year left a bittersweet taste in our mouths, so we wanted to come out swinging,” Spartans senior first baseman Morgan D’Amico said. “We were preparing all week for this, just glad to get it done.”

Springfield Twp finished the regular season 7-11 and just 6-8 in the SOL American, but this is where it’s important to remember it’s the smallest school in the conference and the Spartans more than held their own. It’s a team that played five one-run games and knocked off playoff teams in Upper Moreland and Hatboro-Horsham in conference play.

On Tuesday, the Spartans figured making the most of their opportunities early would go a long way to setting the tone for the game. That extended to the pitching mound, where ace righty Ethan Hamilton struck out two of the three batters he faced during the first inning.

“I just wanted to throw strikes and keep it low, let my defense make the plays,” Hamilton, who struck out seven and threw a complete game, said. “I felt confident after our first couple innings. I’ve seen so many good hitters in our league, I think it makes me better for games like today.”

PJP fell victim to giving up some of those opportunities. An error in the first inning extend Springfield Twp’s time at the plate and helped set up a two-run single, a couple bad pitches in the second got sent over the fence and the Lions found themselves trailing 8-0 after two frames.

It didn’t stop PJP from competing, and the visitors had their own opportunities including bases loaded in the third, but the Lions weren’t able to cash in.

“They did a very good job and I told our guys after the game sometimes you just tip your hat to the other team and say good job,” Pope John Paul II coach Josh Hartline said. “They jumped on us early, got the early lead and their pitcher just threw strikes and pitched a very good baseball game.”

Hartline was proud of his team’s fight and the fact that the dugout stayed live and engaged despite facing an early deficit. While PJP loses 11 seniors, who Hartline credited for their leadership, he believes the younger guys on the roster and who came up after the JV season ended, are hungry to take things further next season.

“We had a couple really good at-bats against (Hamilton), five or six pitch at-bats then he’d paint the corner and strike us out,” Hartline said. “You tip your hat. It was more about what they did today than what we didn’t do.”

Perry’s first swing didn’t leave the yard, but the senior did settle for a leadoff walk and eventually came in to score on an RBI single by D’Amico in the first inning. A two-out error that allowed Brian Murphy to reach came back to bite PJP when Ryan Deal walked to load the bases.

Max Doll was hit by a pitch, bringing a run home and Sean Cornely hit a single that scored two runs thanks to the trail runner hustling in before PJP was able to get the third out on the base paths.

Up 4-1 in the bottom of the second, the Spartans bats came back loudly.

“We’ve been really stressing how we need to take the pitches where they’re pitched,” D’Amico said. “Today that kind of clicked for us. If a fastball was on the outer half, we took it that way. If there was anything inside, we took it to left field. If you had a curve ball that hung, crush it.”

D’Amico had a day playing for the last time on his home field, going 2-for-4 with four RBI. Most of that damage came when he blasted a pitch over the left-field fence for a three-run shot in the second, scoring Joey McLaughlin and Kevin Keown, who hosted the team dinner. Murphy added on with a mortar shell solo shot over the right field fence that made it 8-0.

Deal tacked on an RBI single in the fourth while Perry added an RBI knock in the fifth inning. Mitchell McCann scored on Deal’s hit and posted two hits of his own.

A year ago, also as the two seed, the Spartans left a lot on the table in a 3-2 loss to New Hope-Solebury and missed a chance to play for a district title. Hamilton, who got a called strike three to strand the bases loaded in the top of the third, said that loss was motivation for the Spartans all spring.

“We just play together and play well,” Hamilton said, pausing to show off the team haircut. “It’s a great bond between every guy on this team.”

“We started out the season not so hot, but we really grew as a family, it really stretched beyond being teammates,” D’Amico said. “I’m going to remember these guys for the rest of my life; they’ve helped me through so much. Once we got through facing everybody once, we knew we could play with anybody in our league.”

“Being a senior, I’m excited,” D’Amico said. “This group of guys, they have my back and I’m excited to play in a district championship game.”