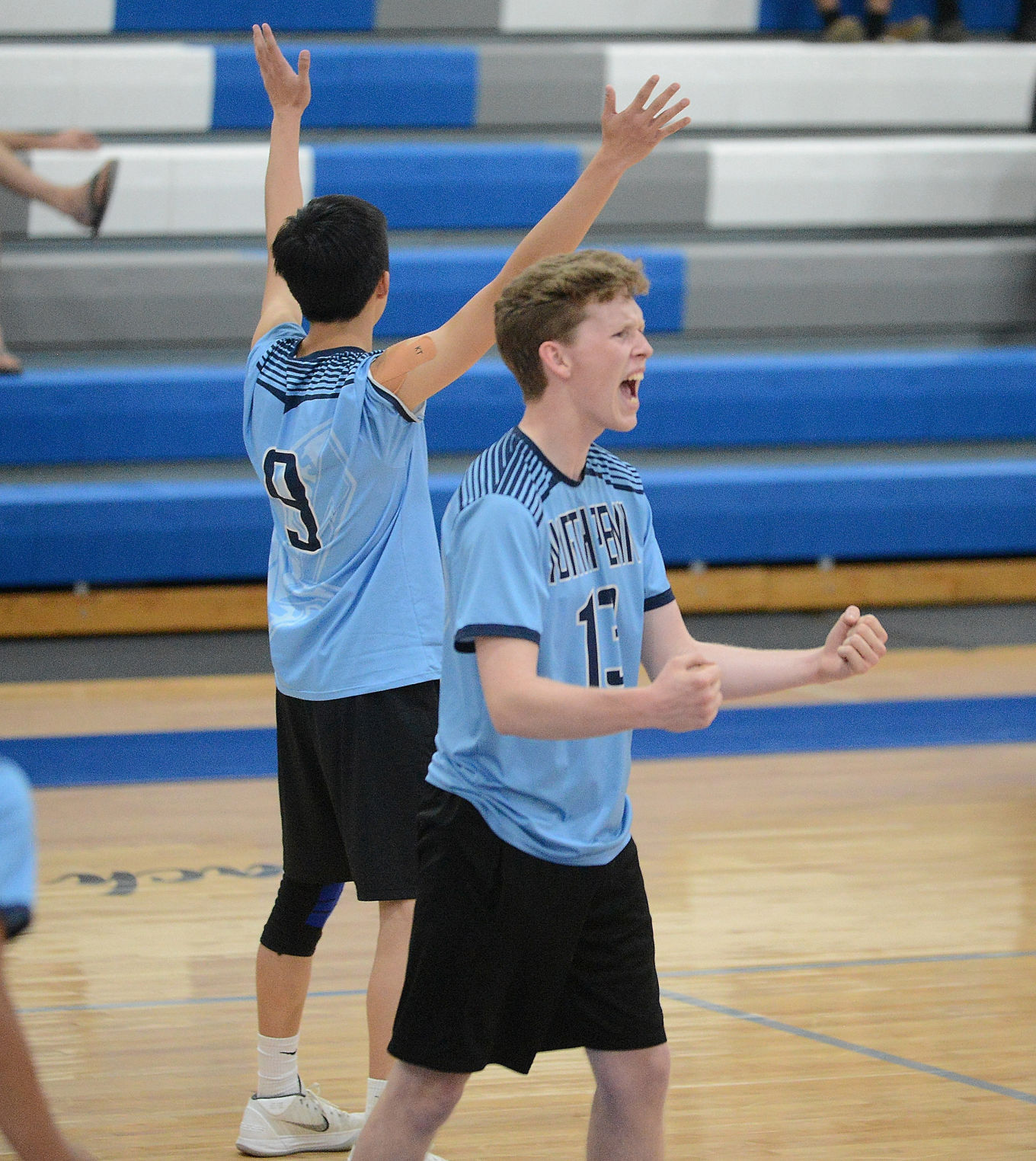 The sixth-seeded Knights controlled their match against No. 2 Pennsbury from start to finish and picked up the 3-0 win, 25-17, 25-20, 25-22, in the District 1-3A semifinals Tuesday evening at Bensalem High School.

“The mentality was we’ve been playing well and to keep doing so,” North Penn coach Ryan Genova said. “That’s all you can really do. You’re always playing against yourself and I think tonight we did that and didn’t worry too much about who we were playing or what the other team was supposed to be or supposed to do.

“We stayed very upbeat. That’s been the biggest difference from now to maybe a month ago is that they’re a much more upbeat team, lively and fun to watch. They’re peaking at the right time.”

North Penn, which clinched a state playoff berth with the win, only trailed three times in the entire match — 6-5 in Game One and 2-1 and 5-4 in Game Three.

“The first game we were confident but still a little nervous knowing they were the number two seed and we were the number six,” Knights captain Drew Coles said, “but as the game and the match went on our confidence grew and that helped carry us.”

Coles and Knights used a strategy they picked up in a JV tournament two years ago to help knock off the Falcons.

“I wasn’t there for that tournament but Drew (Coles) remembers it vividly, as does Michael (Wang), as do a number of the seniors because that was a big win two years ago and a big win tonight” Genova said. “Apparently there were a number of parallels. The goal there was to serve to specific locations and hopefully frustrate them and it worked.”

North Penn’s Drew Coles goes to set the ball during the Knights’ District 1-3A semifinal match against Pennsbury on Tuesdya, May 21, 2019. (Gene Walsh/MediaNews Group)

The teams were tight for the first half of the first game, with the Knights holding a 12-10 advantage after 22 points. They followed that with a 9-2 run to take a commanding 21-12 lead. They closed out the win, 25-17, when Pennsbury’s serve landed out of play.

The second game was more of the same. The teams were tight most of the way, with North Penn holding a 15-14 lead after 29 points. They won six of the next seven points to take a 21-16 lead and finished it off, 25-20, when the Falcons couldn’t return a serve.

The third game was the tightest of the three. Pennsbury was within two twice late in the game, 23-21 and 24-22. For the third time North Penn won on the serve – this time, 25-22, thanks to the Falcons hitting the ball into the net.

Coles, Zach Jayes, Wang, Isaac Lambert and Kevin Abraham all made plays at the net for North Penn. Defensively they took away shooting lanes and offensively they used power and finesse.

The Knights will play for the district championship Thursday night at 7 p.m. at Council Rock South. They’ve never reached the district final in four years under Genova.

“We’re in uncharted territory and we’re happy about it,” the coach said.

“We came out a little flat,” Rams coach Dave Childs said, “not like we did last week in our games. I think that didn’t set the tone we wanted to, but we fought back a little bit and I can give our guys credit for that.”

Pennridge will face Pennsbury Thursday for third place and the final District 1 spot in the state playoffs.