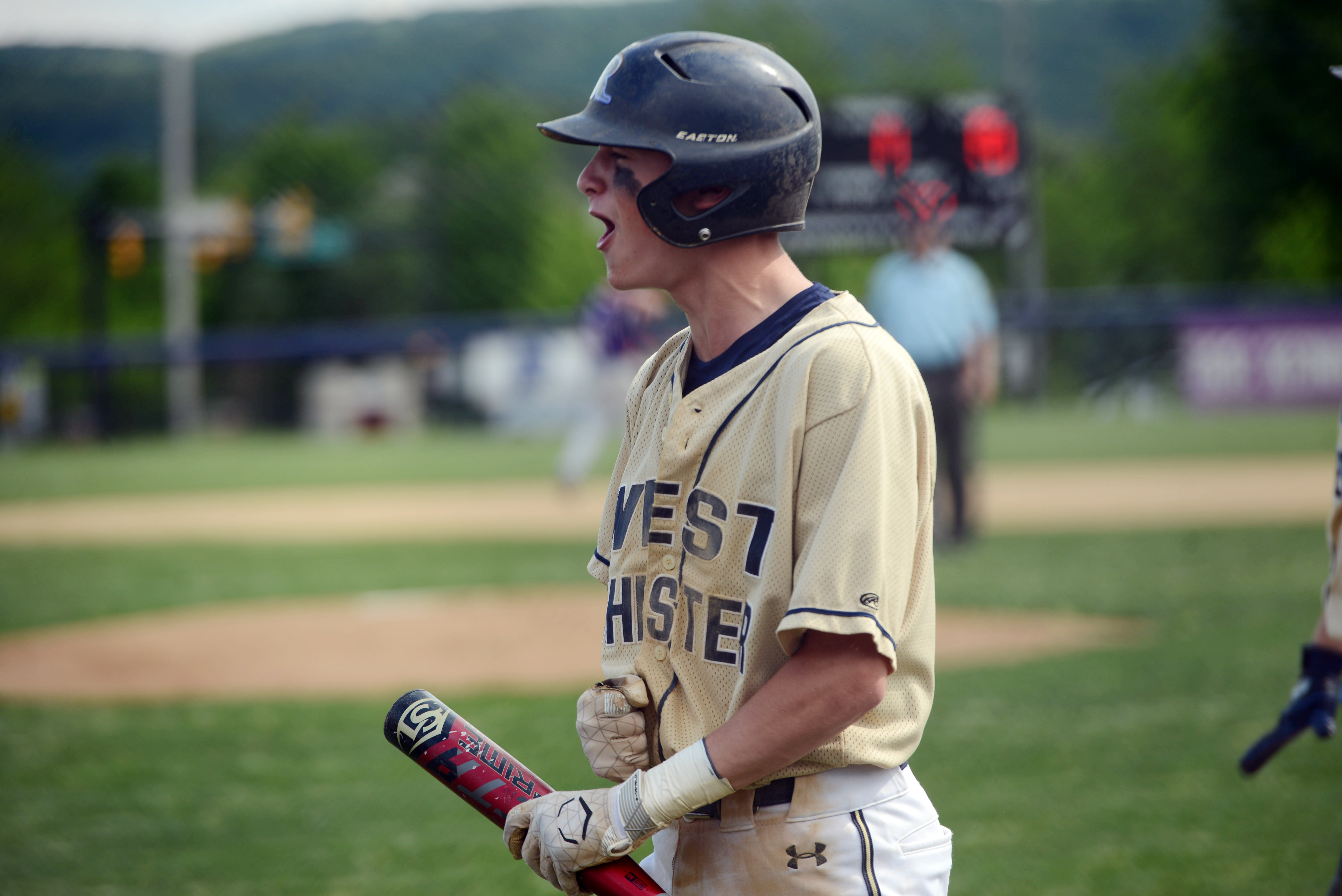 PHOENIXVILLE >> The sound the ball made off the bat of Phoenixville’s Brandon Fink sure made it seem like the game had just been tied.

“That’s the fastest guard in America right there, so I knew he had that,” said Watson, making a nod at Fails’ football credentials.

Fails tracked down the hard-hit ball in the bottom of the seventh inning, preventing the game-tying hit and securing the final out in Rustin’s 8-7 win over Phoenixville in the District 1-5A playoffs on Thursday at Phoenixville.

For the second year in a row, the 12th seeded Knights upset the 5th seeded Phantoms bringing the Pioneer Athletic Conference champions’ season to another premature end.

“Obviously winning the PAC is something we’ll never forget, but this one hurts a lot,” Phoenixville shortstop Colton Brown said.

The matchup started out very similar to last year’s district game, which Rustin (10-8) won, 8-6. After putting up a four-run first inning on Phoenixville ace Kevin Cushing in 2018, the Knights tagged Phantoms starter Luke Bagley for three runs in the first inning on Tuesday.

“I like hitting here personally,” said Watson, who went 2-for-3 and drove in three runs Monday. “I think I just see the ball well here. Once playoffs come, I just get in a different zone. I feel very locked in.”

As they’ve done ample times this year, the Phantoms quickly came back, plating three runs of their own in the bottom of the inning to tie the game.

Phoenixville took the lead in the bottom of the third on an RBI single by first baseman Dylan Clark to score Brown. Bagley settled in with three scoreless inning following the first, and the Phantoms led 4-3 heading to the fifth.

“The whole year, every time we play, no matter what the score is we come back,” Phoenixville head coach Dave Cimina said.

The Knights added two more off Bagley in the second and two off reliever Jason Bilotti in the top of the sixth to build a 7-4 lead heading to the bottom of the sixth. Phoenixville got two runs back, knocking out Rustin starter Matt Fricker, who gave up six runs (four earned) in 5.2 innings.

A hard hit groundball by Phantoms’ outfielder Trip Shoemaker in the hole on the left side nearly tied the game with two outs, but Demarco dove to his right at shortstop and kept the ball from getting out of the infield. Chris Bianchi came into the game and struck out the next batter to end the threat.

“Coach always says get down, get dirty,” Demarco said of his diving stop. “I knew I wasn’t going to get him out at first, but I knocked down the ball, so they didn’t get the run.”

Rustin entered the bottom of the seventh with an 8-6 lead after tacking on an insurance run in the top of the inning. Justin Blakey, who led the Phantoms with three hits, brought in a run with a one-out single. Blakey advanced to second with two outs on a balk to get into scoring position for Fink. Fink barrelled the ball up, but Fails tracked it down to win the game.

“It was one of the hardest hit balls all day for them,” Demarco said. “But I have faith in our left fielder Jacob Fails.”

Led by captains Brown, Bagley, Blakey and Devon Goryl and other seniors, including Trip Shoemaker and Dylan Clark, the Phantoms put two together two of the best seasons in the program’s history over the past two years. Most of the group has played together since competing for Kimberton’s travel team starting when they were eight years old.

Their accomplishments include two straight PAC Frontier division titles and the program’s first PAC championship in 17 years. A second straight early district playoff exit was a tough way for the senior group to end their careers.

“This is definitely the most fun year I’ve ever had with baseball,” Brown said. “Not just because of the championship. I just loved being around these guys; going to practice every day was fun.”

“I feel like Phoenixville baseball hasn’t been this good in forever,” he added. “I thought we had a legitimate chance to go far in districts and states, and it just hurts getting cut this short.”

Despite uneven results during the regular season, Rustin has found continued success in the district tournament. The Knights have now won a district playoff game in three straight years. A victory over Interboro on Wednesday would send Rustin to the district semifinals and state playoffs for the second year in a row.

“It’s a great culture here,” Demarco said. “We raise them well. We prepare for it every offseason … We tend to always start off slow and find our way at the end of the season.”

“We have experience,” he added. “We’re confident that we can win the next game and keep it rolling.”