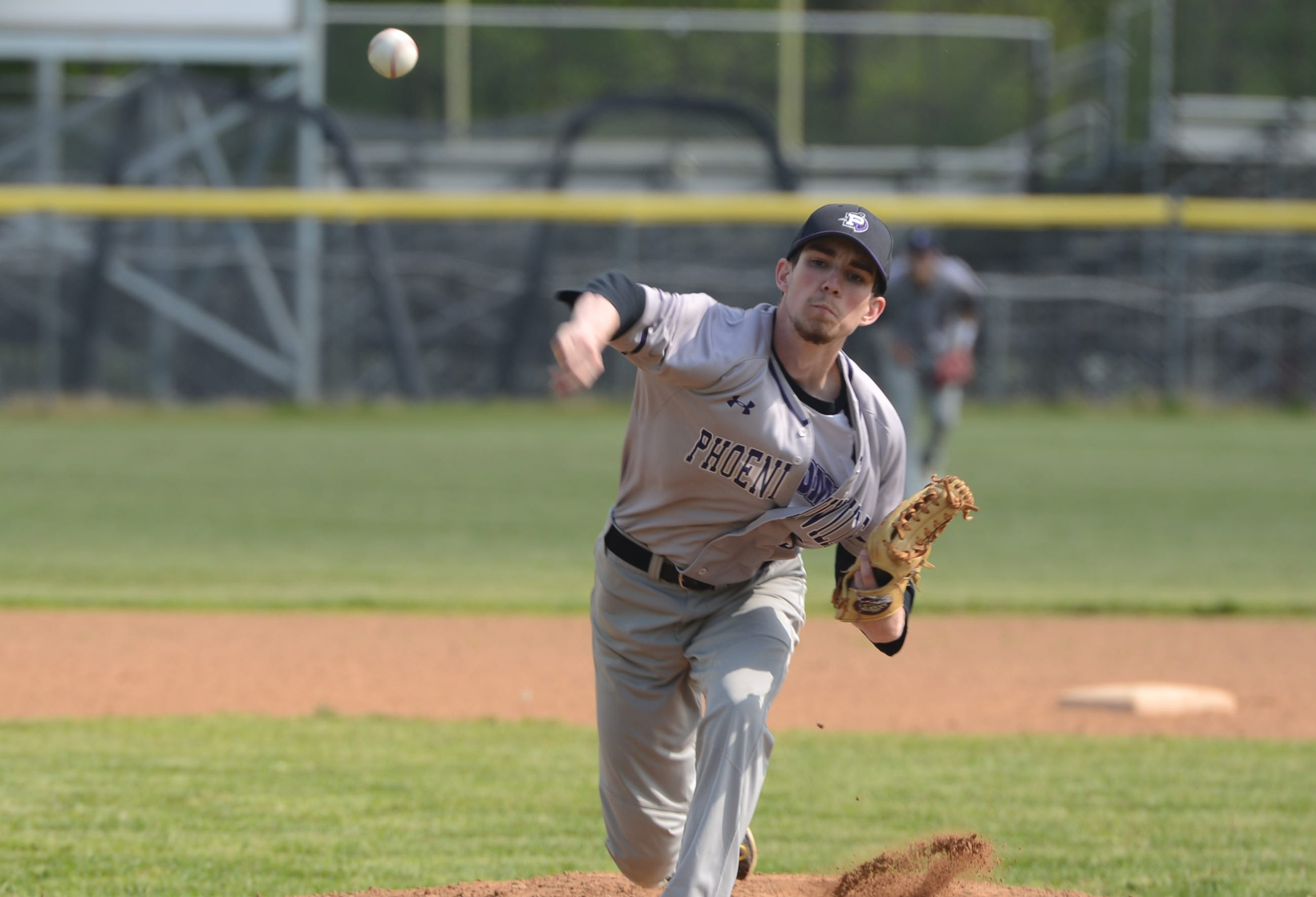 LOWER POTTSGROVE >> Phoenixville coach Dave Cimina told Will Trianosky to go warm up before the bottom of the eighth inning Wednesday at Pottsgrove.

Partly, he wanted the lefty to be ready in case he was needed to close out the extra-inning win. Cimina also wanted to see if he could get a rise out of starter Luke Bagley, who was on the verge of finishing off an eight-inning complete game against Pottsgrove for a Pioneer Athletic Conference Frontier division title.

“I want to hear him tell me not to take him out,” Cimina said.

Bagley and Cimina have had some conversations on the mound this year. Most have involved Bagley pleading his case to go an extra inning or two to no avail.

There was not much need to make an argument Wednesday as Bagley delivered the Phantoms a second straight division title with a 4-1 win over the Falcons.

Entering the eighth inning at 71 pitches with a three-run cushion, it was Bagley’s game to lose. The senior righthander needed just eight pitches to finish off the eight-inning complete game.

“Today, he let me go,” Bagley said. “I knew if anyone got on (Trianosky) would be going in, but I wanted this one. And he let me have it.”

Phoenixville (8-2 Frontier, 11-5 PAC) went through division play undefeated last season. The road to a division title was much bumpier for the Phantoms this year.

Pottsgrove handed the Phantoms their first division loss in two years April 12, when the Falcons pulled out a 5-2 10-inning win.

Wednesday’s contest was in essence a playoff game. The winner would represent the Frontier Division in the PAC Final Four, while the loser would miss out on the PAC postseason.

“It adds to the hype of the moment,” Bagley said. “It makes everything a lot more fun and special. This game gave us something to play for. Last year toward the end, it was like, ‘Let’s get these games over with and get ready for playoffs.’ This one it really meant a lot, so it was a lot of fun.”

Bagley allowed two runs in five innings in the teams’ first meeting. His effort would have been wasted again if not for the heroics of senior first baseman Dylan Clark.

Down 0-2 in the count with two runners on and nobody out in the top of the eighth, Clark worked a full count before hitting a hard ground ball through the right side to score Trip Shoemaker and Ethan O’Donnell, who reached on a single and walk, respectively.

“No matter how many strikes, I just look to see the ball, hit the ball, make contact,” Clark said. “At first when I saw it, I thought it was going to be a ground ball right to him. I didn’t know if the run was going to get in, but I saw it bounce over and excitement just ran through my body.”

Both teams had their aces going. Junior Ethan Edelson tossed five shutout innings for Pottsgrove before he was taken out due to a high pitch count. The only run Bagley allowed was an RBI single by senior third baseman Colin Templin in the bottom of the fourth, after a throwing error put Connor McGlinchey on third base.

The Phantoms tied the game in the top of the sixth when Brandon Fink hit a hard grounder toward Templin with runners on second and third. Templin made a diving stop to prevent two runs from scoring, but he was unable to stop O’Donnell from reaching home on the play.

Pottsgrove (7-2 Frontier, 9-6 PAC) won four league games two seasons ago and five last year. The Falcons being in playoff contention may have caught the rest of the league by surprise, but that won’t be the case next year.

While Templin, Gibson McMonagle, Garrett Heft, Cameron Mowery, Kyle Fehnel and Lucas Stringer will graduate after this season, Edelson and shortstop Ethan McMonagle should lead a group that competes for a division crown again next year. Wednesday’s game gave the Falcons a taste of what PAC postseason baseball is like.

“Before the season, if you asked anybody outside of this clubhouse, this team, not many people were saying Pottsgrove is going to be playing on the last day for the division title,” coach Jamie Nash said. “I’m proud that we got here. I think that it’s a fantastic experience.

“We’ve got nine juniors and two sophomores playing varsity this year, so those guys getting that experience today, coming back next year is going to go a long way. That stage isn’t going to be too big next year.”

Phoenixville’s Colton Brown throws from shortstop for an out in the eighth inning Wednesday against Pottsgrove. (Owen McCue – MediaNews Group)

All nine of the Falcons’ league wins have been by three runs or less, including five-one run victories. The Falcons have got strong outings on the mound throughout the season, but their offense has struggled at times.

Pottsgrove totaled five hits Wednesday. The only real threatening situation Bagley got into was eradicated when a base running error cost Pottsgrove a potential bases-load, no-outs situation in the top of the second.

“The Achilles’ heel all year has been hitting, not putting enough pressure on the defense,” Nash said. “You gotta give credit to Bagley. He threw a fantastic game today, but we didn’t put enough pressure on him. We didn’t have enough base runners, enough timely hits.”

Just a few weeks ago, Phoenixville looked poised to lock up a PAC Final Four spot even it was unable to win a division title.

Then came three straight league losses, including shutout defeats to Boyertown and Owen J. Roberts in their two games leading up to Wednesday.

The Phantoms fell in the league championship last year and were upset in the first round of the District 1 playoffs despite coming into the tournament as the No. 5 seed. With an essential playoff game already under its belt and a rough patch hopefully behind it, Phoenixville feels ready for a deep postseason run this time.

Still, the significance of a second straight Frontier title is not lost on Clark and the other seniors, who missed out on the league playoffs just two seasons ago.

“This was great,” Clark said. “I love the environment. They had kids here. I love playing away. I love coming and beating them on their home field and taking the Frontier division.”

“What we’ve been through, a couple years ago we were at the bottom of the PAC,” he added. “These last two years we just sprouted up to the top. It feels great.”