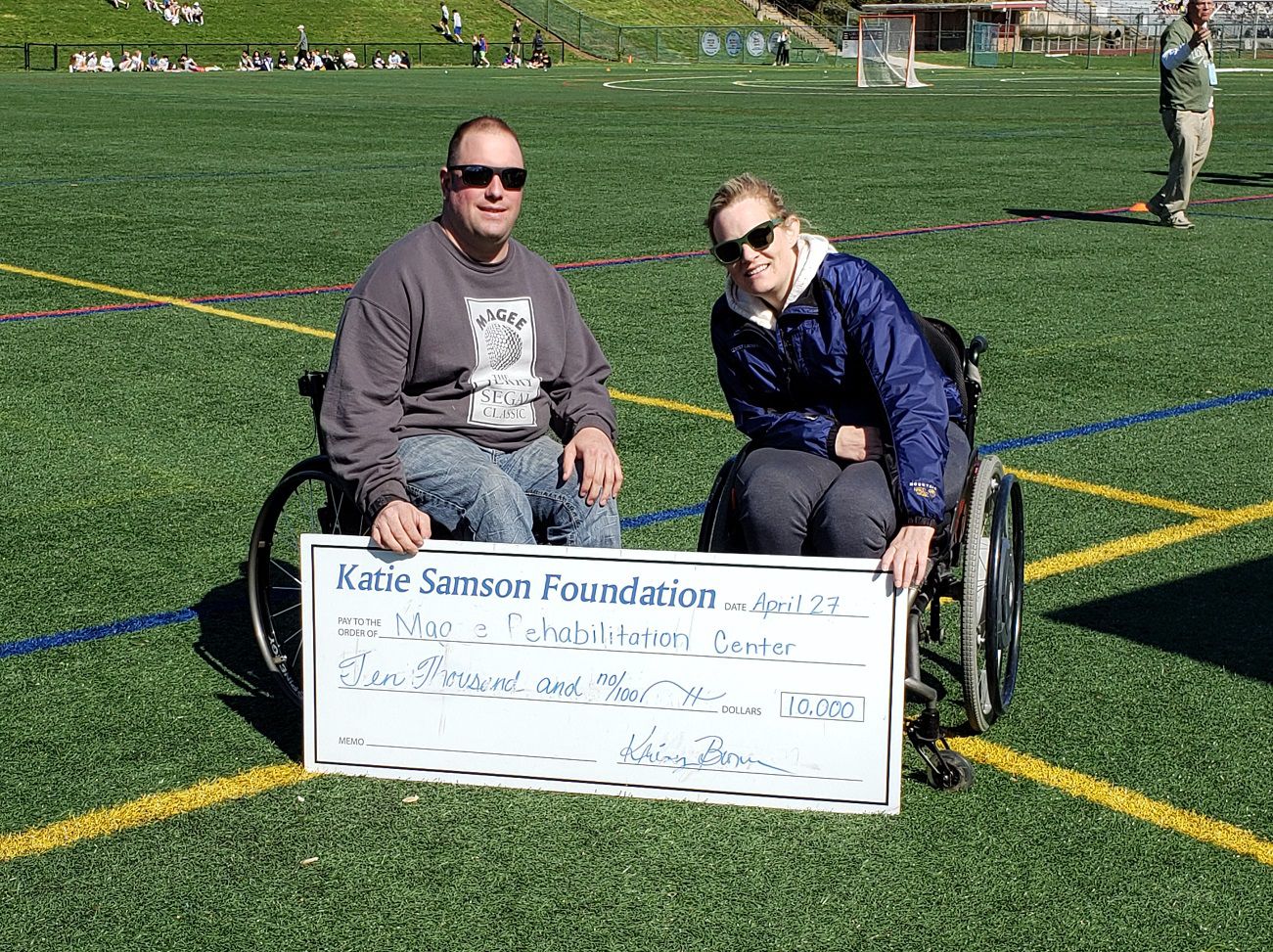 Keith Newerla, left, accepts a check for $10,000 on behalf of Magee Rehabilitation Hospital from the Katie Samson Foundation, presented Saturday at Radnor High by Samson.

RADNOR – Cierra Hopson grew up surrounded by people who loved the sport of lacrosse. She knew that one day she would be taking part in the Katie Samson Lacrosse Festival.

“I think I started playing when I was in kindergarten,” Cierra Hopson, a sophomore, said before she helped the Raiders to an 11-7 victory over defending PIAA Class AAA champion Unionville at the 19th Katie Samson Lacrosse Festival on Radnor’s Encke Field Saturday morning.

“When I was in the seventh grade, Katie Samson’s mother (Bannie Ackerman) was my teacher.”

George Hopson was an assistant coach at Radnor and Archbishop Carroll before helping with the Villa Maria team that earned the 2018 PIAA Class AA title.

“Katie Samson’s a special person,” George Hopson said. “After she left here, she went up to Middlebury College and helped them win the (Division III) national championship as a freshman.”

Months later, she was involved in a sledding accident that left her a quadriplegic.

“She was a hard-working kid and became a great goalie,” Hopson added. “And then all that happened to her.”

Over the years, the Katie Samson Lacrosse Festival has grown into a major fund-raiser for research to help those with spinal cord injuries.

“I remember the first year they had it, and now look at this,” George Hopson said, pointing to all the activity that was taking place on the Radnor campus, including girls and boys lacrosse games, activities for children, as well as food and lacrosse equipment vendors.

Cierra Hopson, who also plays field hockey and basketball, stands 5-11. She plays attack, while her Aunt Kristin was a strong defender.

“They resemble each other in so many ways,” George Hopson said. “The thing I like about Cierra is how unselfish she is. With her, everything is about the team.”

The younger Hopson, whose father, Mike, was an outstanding athlete at Radnor, smiles when any mention is made of her aunt, who will be delivering her first child very soon.

“Being talked about along with (Kristin) means so much to me,” she said. “I’ve heard a lot about when she played.”

George Hopson still shakes his head when mention is made of Katie Samson’s horrific accident.

“Everyone was devastated,” he said. “The people at her college, her teammates, her teachers, all of us back here. The thing is that she turned something that was a horrible negative into something so positive. That’s why it’s great to be here each year for this day.”

Radnor 11, Unionville 7 >> Ellie Mueller scored five goals, and Cate Cox had a hand in five tallies with three goals and two assists as the Raiders overturned a halftime deficit by scoring nine goals in the second half.

Garnet Valley 13, Notre Dame 9 >> Regan Nealon scored a second-half hat trick as the Jaguars tallied eight times to pull away in a game that was tied at the break.

Madi McKee led all scorers with four goals. Kara Nealon added a hat trick, Regan Nealon chipped in two assists and Liv Brenner paired a goal with an assist for the Jaguars (12-1). Sierra McLaughlin made 10 saves in goal.

Kaitlyn Henning put the Jaguars up for good early in the second half off a feed from Kathryn Toohey (team-high four draw controls). Garnet Valley scored the first three goals of the second half and never trailed again.

Archbishop Carroll 12, Springfield 7 >> Amber Germer scored three goals and two assists as the Patriots ran out to a 9-3 lead at halftime, and Julia Dellarata made 11 saves in goal to protect that advantage as Springfield pushed in the second half.

Carli Dougherty and Madison Henry scored twice each, and Julia Downs and Kiley Mottice contributed a goal and an assist each for the Patriots (10-3) in a rematch of the 2017 PIAA Class 3A final.

Belle Mastropietro scored two goals to go with an assist for the Cougars (10-4).

Agnes Irwin 19, Villa Maria 15 >> Emily Willis scored six goals as the Owls (14-4) led by eight at the half and hung on to get the result. Julianne Carey, Natalie Pansini and Marissa White each posted hat tricks while combining for four assists for Agnes Irwin.

Episcopal Academy 16, Owen J. Roberts 12 >> Olivia Dirks scored six goals, but her 14 draw controls (including the 500th of her career) was the real decisive stat as EA prevailed. Caroline Burt and Devon Whitaker each posted hat tricks, and Jayne Morley chipped in two goals for the Churchwomen (15-0).