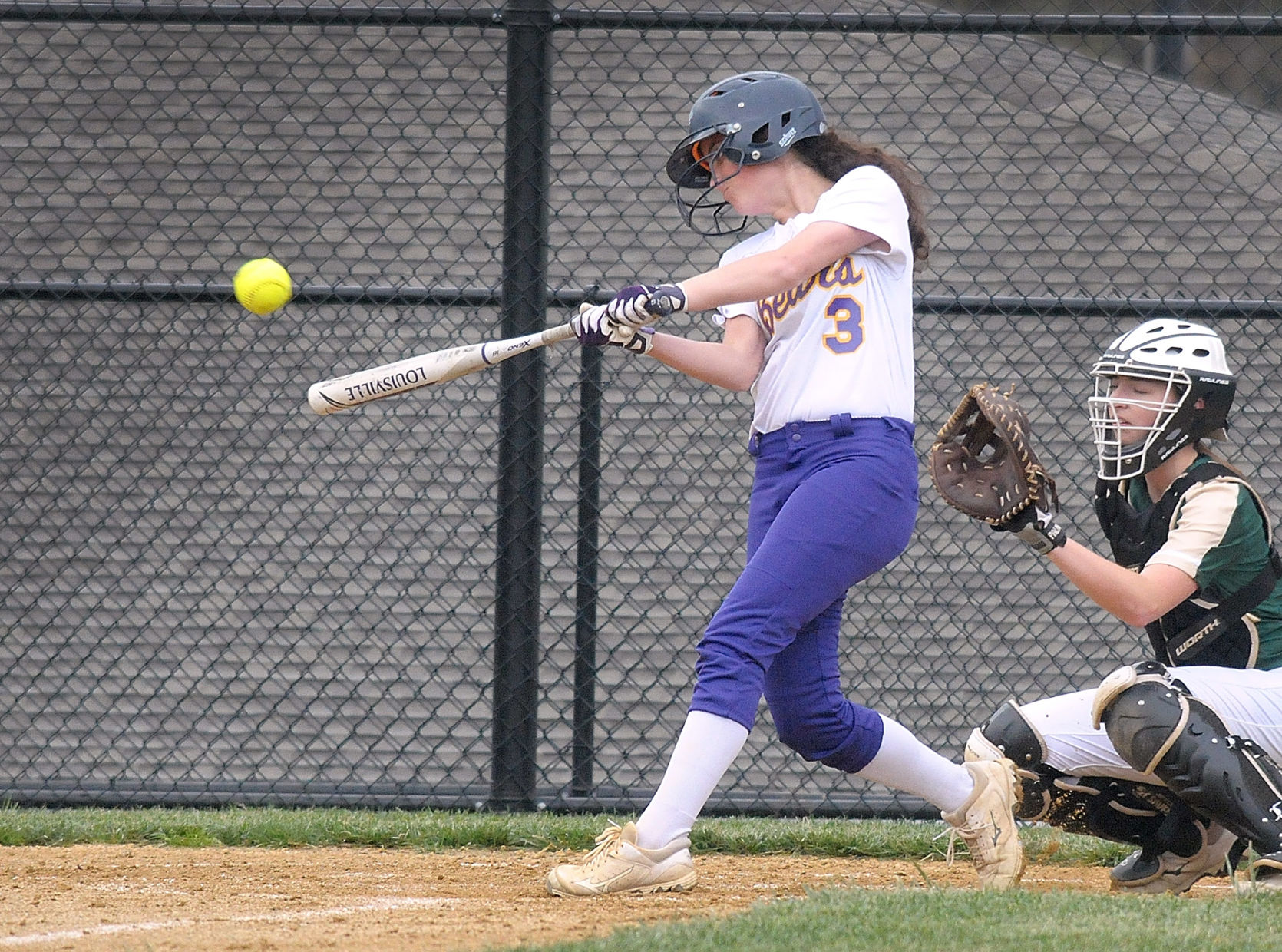 UPPER MORELAND >> One sound told Gianna Fiorenza the fly ball she sent sailing out to left-center field had indeed cleared the fence.

“I thought it was going to hit the fence at first. And then I heard my dad screaming,” the Upper Moreland softball catcher said. “That’s usually when I know.”

Fiorenza’s hit carried just enough to get out of the field for a two-run home run in the bottom of the fifth inning, breaking the Golden Bears’ 3-3 tie with visiting Lansdale Catholic and breaking Fiorenza out of a tough day at the plate.

After the Crusaders pulled to within a run in the top of the sixth, Upper Moreland used the longball for some insurance as Brianna Hughes belted another two-run home run in the bottom of the frame as the Golden Bears went on to claim a 7-4 non-league victory Monday afternoon.

Lansdale Catholic’s Rebecca Tiley slides into second for a double as Upper Moreland’s Brianna Hughes goes for the tag during their game on Monday, April 22, 2019. (Gene Walsh/MediaNews Group)

“We’ve been kind of nickeling and diming them the last handful of games and run here, run there and they were two big, two-run shots in some big spots,” Upper Moreland coach Scott Ludlow said. “Both to give us a little bit of a cushion. G, the catcher, has been struggling a little bit but that was a big spot for her, it was good for her to she her get off like that.

“The second one was a good two-out swing put on it by Hughes and for much as she got that off the end she got a piece of it. So, they were two big hits for us.”

Hughes was 2-for-2 with a double, two walks, two RBIs and two runs scored, Jocelyn Baumeister went 2-for-4 with an RBI and run scored while Jenna Sadowski finished 2-for-3 as the Golden Bears (7-3, 5-0 SOL American) got back on the winning track after last Thursday’s 14-5 loss to Truman ended a five-game win streak.

“I think it’s every one just coming together and coming back after an away loss,” said Fiorenza, who hit her first home run of the season. “I think it helps a lot with the team.”

Lansdale Catholic (7-4, 6-1 PCL) trailed 3-1 after two innings but pulled even in the top of the third on Jen Llewellyn’s two-out RBI double — Llewellyn just missing a homer as the ball hit near the top of the fence in right-center field.

“I thought it was going to go out but just missed it,” Llewellyn said.

“It definitely was a positive game. I don’t think we’re upset about it at all,” Llewellyn said. “So, we’ll just work hard and next game we’ll do better.

Upper Moreland, one of two teams left unbeaten in SOL American play — Plymouth Whitemarsh the other — returns to conference play Tuesday to host Cheltenham at 3:30 p.m.

“We’ve been taking care of business, we’ve been getting things done,” Ludlow said. “We had a big win against Hatboro(-Horsham), we still haven’t seen PW yet, we got two against them, we got two against Upper Dublin. We got Abington (Thursday) and Abington’s the kind of team that can come up and get somebody if you’re not careful.

“So, we’ve been doing what we need to do to get win in league, we just have to continue that roll and that’s kind of what I’m preaching is just to keep it moving forwards, and don’t take the losses too hard and don’t get too high for the wins and just keep plugging forward and do what you have to get them.”

Lansdale Catholic is also home Tuesday for a Catholic League matchup with St. Hubert at 3:45 p.m. The Crusaders sit just behind PCL leaders Archbishop Ryan and Cardinal O’Hara — both 6-0.

In the bottom of the fifth, Sadowski led off with a hard-hit single to third with her courtesy runner Erin Shaffert going to second on a wild pitch. Fiorenza followed with her two-run homer to left center for the 5-3 Bears advantage.

“I haven’t been really seeing the ball really well lately but today was really good,” Fiorenza said. “And my Dad helped out before the game since we had an off day so that helped a lot.”

The Crusaders made it 5-4 in the top of the sixth as Bridget Duffy’s two-out single to right brought home Casey Meenan. But the Golden Bears added some extra cushion in their half of the inning. After Baumeister’s one-out single to left, Hughes belted her two-run homer to left to put Upper Moreland up three.

“I think today everything was clicking with everyone,” Fiorenza said. “And we had good pitching today and we just had to show up behind her so that was nice.”

#SOFTBALL: Jen Llewellyn with a 2-RBI double off the top of the fence in right center, pulling @LCSoftball1 even 3-3 with Upper Moreland T3. pic.twitter.com/ufb5TOqsL0

LC brought the tying run to the plate in the top of the seventh after Llewellyn’s single put runners on the corners with two outs but Sadowski got the next batter to ground out to the shortstop.

Upper Moreland jumped out to a 2-0 lead with a pair of runs in the bottom of the first. Baumeister led off reaching on an error while a Hughes walk to put two on for Jackie Martino, who singled to left to bring home Baumeister. Hughes, who went to third on the play, scored when she stole home.

Lansdale Catholic sliced its deficit to 2-1 in the second. Tiley started the inning with a double to right center. After a two-out Meenan walk, UM tried to get Tiley out at third when Olivia Davis grounded to the left side of the infield but an error allowed Tiley to go home.

The Bears regained the two-run lead in the bottom of the second as Baumeister’s RBI single down the third-base line scored Allison Ludlow. A walk to Hughes on the next at-bat loaded the bases with one out but Burns working out of the jam with back-to-back strikeouts.

Burns keeping the margin to 3-1 enabled to Crusaders to tie things in top of the third. Paciolla and Mary Picozzi hit consecutive one-out single and two batters later both scored as Llewellyn ripped a two-out double off the right-center fence.

“That’s one of those spots that momentum could shift if we kind of allowed it to,” Ludlow said. “But thanks to Jenna, she kind of settled down that inning and got out of that. And then we were able to come back an inning or two later and kind of push it back out a little bit.”