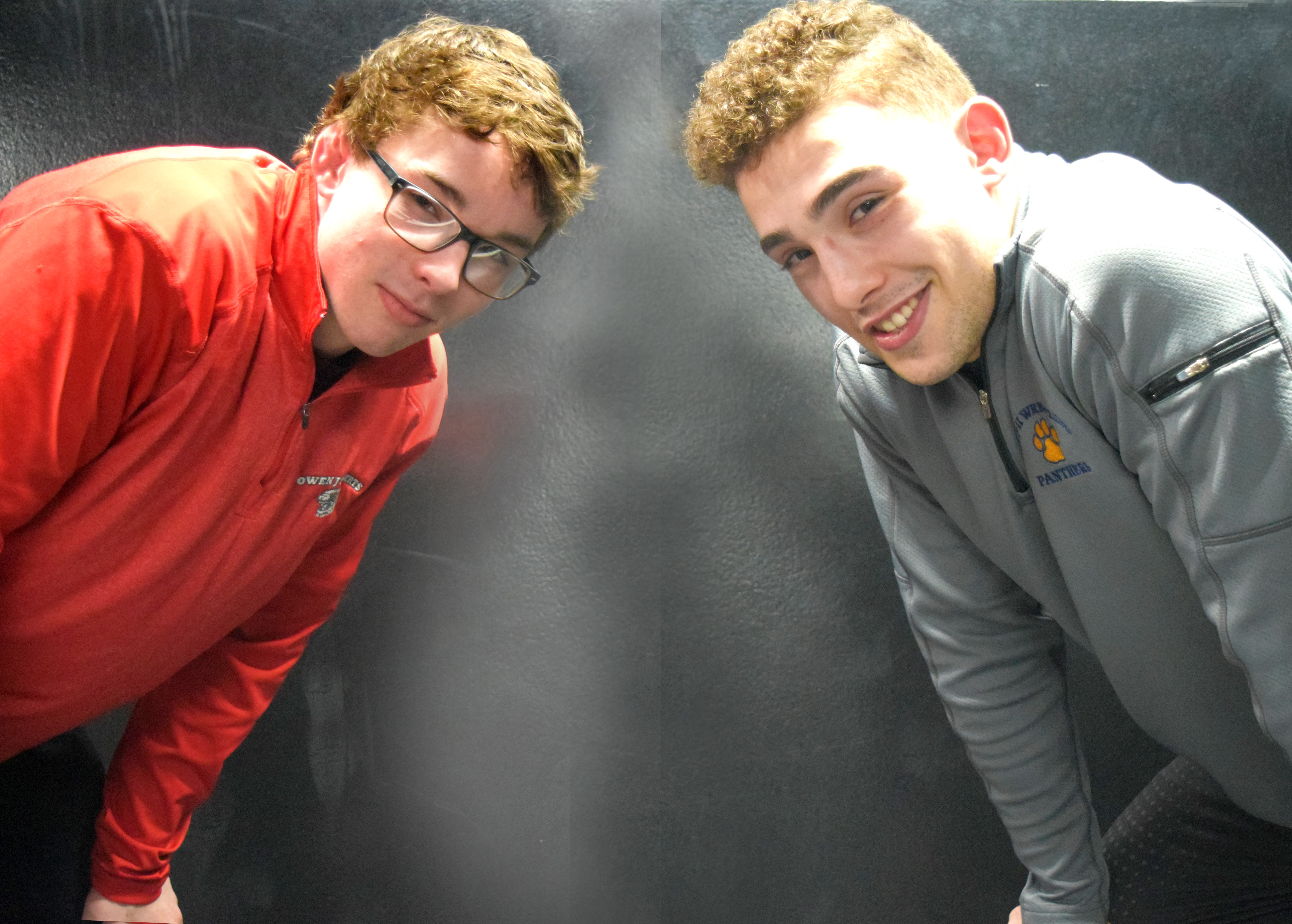 When champions face off against each other …

…you get something like the semifinal round of the 2019 Escape the Rock Tournament.

The one semi in the 152-pound weight class of this prestigious, high-powered competition, hosted Jan. 19-20 by Council Rock South, pitted two eventual Pennsylvania state champions in Ryan Vulakh and Daniel Mancini. While it would be the only time the senior standouts from Pope John Paul II and Owen J. Roberts squared off, they were ultimately united in being selected as The Mercury’s Co-Wrestlers of the Year.

“It was pretty high-paced,” Mancini said of the 3-2 bout. “Ryan rode me out in the third period. After that, I focused on the bottom.”

Vulakh effectively dominated the competition this winter, compiling a 35-0 record with 15 pins and seven technical falls. The senior breezed through the District 1/12-AA and South East AA Regional 152-pound ranks, then swept over the state-level lineup to finish both as a Pennsylvania champ and the AA bracket’s Outstanding Wrestler.
Vulakh ended his scholastic career with arguably one of the best seasons ever experienced by a local wrestler.

“This year, I realized I can hang with the best guys,” he said. “I worked to be more offensive. The more I know, the better my confidence.”

His run through the 2018-19 schedule was highlighted in the regular season by gold-medal showings in such prestigious tournaments as Beast of the East, Powerade (Canon McMillan) and Escape the Rock. He buzzed through the opposition in the post-season, scoring pins in seven of 10 matches while scoring technical falls in the other three.
Along the way, Vulakh went over the 100-win mark, finishing his career with 107.

The capper was the state-championship bout against Freedom Area’s Trent Schultheis. Vulakh racked up a 20-5 lead by the 5:10 mark to become the Pioneer Athletic Conference’s first state champ since Boyertown’s Jordan Wood in 2015.

He then went on to compete in the annual Pittsburgh Wrestling Classic at the University of Pittsburgh one week later. He came up short of Cameron Amine of Detroit (Mich.) Central Catholic at 152, 3-2.

“I should have carried Pittsburgh,” he said.

For Mancini, the loss to Vulakh at the “Rock” was one of only two down moments he experienced in a 37-3 season.
Off that setback, the OJR senior fell to George Worthy of Paulsboro, N.J. 11-6. That left Mancini wrestling for fifth place, and he rebounded for a 6-1 decision of Northampton’s Michael Kistler.

“Overall, it was a terrible match. I fell apart in every aspect. I didn’t compete at all.”

The next downside came during the South East AAA Regional, where his bid for a second regional crown was undone in the semifinal round by Council Rock North’s Dillon Sheehy, 8-6. Mancini recovered to finish third, scoring a first-period pin on Boyertown’s Brett Breidor before getting a forfeit verdict over Council Rock South’s Cole Flanagan.

“I didn’t start wrestling until the third period,” Mancini recalled. “Every shot I did that was good, I stopped moving. Sheehy took advantage of that.

“I knew I was a better wrestler. I didn’t show it.”

Three of Mancini’s bouts at states were by point spreads up to four. In his final with Kiski Area’s Cam Connor, though he racked up a 10-2 major decision to become the OJR program’s first state champ since Donn Kulp in 1971.

“The loss at regionals this year … it was an important step,” Owen J. head coach Steve DeRafelo said. ”I don’t know if he wrestled his very best.

“The loss, in certain ways, made him realize it was going to be a battle, and he had to be at his very best. He took the loss the right way.”

The state semifinal with Bethlehem Catholic’s Cole Handlovic proved to be a precursor to Mancini’s state-title achievement. He went overtime for a 2-1 ultimate tiebreaker victory.

“The first three periods were scrambles,” Mancini said. “He fended me off. When it came down to the wire, I wanted it more.”

“A lot of people talked about how the semifinal battle at states defined the state title,” DeRafelo added. “Dan knew if he didn’t do the million things necessary, he wouldn’t win.

“It’s not an area of strength for him. In the end, he did it the hard way.”

The seeds of Mancini’s state-champion aspirations, according to him, were planted on the Giant Center medal podium during the 2018 PIAA tournament. He placed fourth at 152, completing a 4-2 run ending with a loss to Hempfield Area’s Luke Kemerer, and stood on the fourth step looking toward the top.

“I came close,” he said. “After that tournament, I realized I could be a state champion.”

“We do exit interviews at the end of the season, where we talk to a couple kids about their goals for next year,” DeRafelo recalled. “Dan said as a freshman, never having been to states, he was going to be a state champion. In his mind, that’s what he was going to do.”

Vulakh’s entry into wrestling came when he was 10 years old. He was joined in the pursuit by younger brother Matt, himself a two-time state medalist at 106.

“Originally, it was to help for football,” Ryan said. “But then I realized wrestling makes more sense.”

Vulakh flourished under the tutelage of the PJP coaching staff. Hontz was a PIAA silver medalist at Quakertown in 1985, and he guided a number of state champions during his storied tenure with the Upper Perkiomen mat program from 1990 through 2014.

One of those champions, Chris Sheetz, went on become an assistant to Hontz.

“He and Chris (Sheetz) have a bond,” Hontz said. “They work morning, afternoon and evening. My only role is to make sure he stays focused.

“Once in a while, I give him the extra voice of encouragement. Sometimes doubts creep in, and it’s my job to say ‘Get moving’.”

That experience provided Vulakh a boost in his drive for state-level supremacy. His two previous visits to Hershey ended on lower steps of the medal podium: Eighth place as a freshman at North Penn, third last winter.

“Having been through that, they know how to be calm,” he said. “I have full faith in what they say. It’s the mental edge, making me the best I can be.”

Mancini’s leadership posture at OJR has centered more on actions over words. The actions have translated into a 145-34 career record, the win total ranking him 20th in The Mercury coverage area and second in the Roberts program behind 2015 graduate Derek Gulotta.

“Dan’s not the most vocal person,” DeRafelo noted. ”He sets the example, the way he took care of the little details.”
One particular detail proved pivotal in Mancini’s state-title run. Though he had little previous experience in it during matches, Mancini’s work on rideouts paid off in the state semifinal bout.

“It’s something we work on in practice,” DeRafelo said. “We do it every day.”

“I think he did it one time. He stayed focused, and that allowed him to do it.”

“Antonio gets fired up when that happens,” DeRafelo said. “I think Dan tried to get him fired up.”

Both wrestlers are headed toward collegiate careers at the Division I level: Vulakh at George Mason, Mancini at

Virginia Tech. They both figure to wrestle at 149 for their respective programs.

Mancini, who joined Vulakh at the Pittsburgh Wrestling Classic the weekend after states — he pinned Zach Lawrence of Duanesburg, N.Y. at 160 — figures to try freestyle competition at Fargo. N.D. in July.

“That’s the only big tournament I’m doing,” he said. “The rest will be practice. I want to put in time during the off-season, focusing on getting better, not wins and losses.”