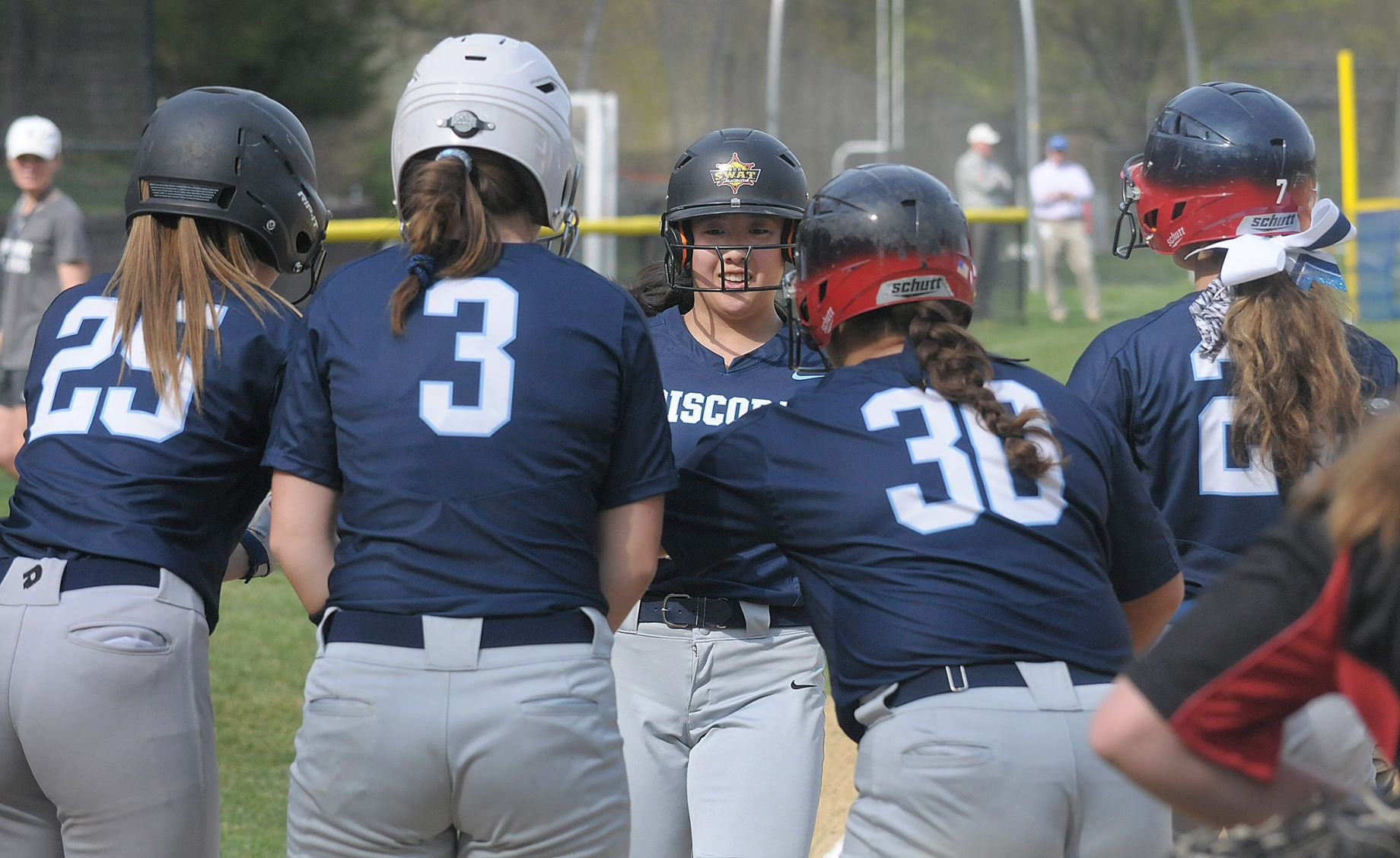 Episcopal Academy's Karen Xiao is greeted at home by her teammates after her home run during the Churchwomen's game against Germantown Academy on Thursday, April 18, 2019. (Gene Walsh/MediaNews Group)

WHITEMARSH >> Along with starter Emma Tansky, Episcopal Academy can also hand the ball to Karen Xiao.

It was the freshman’s fifth start of the year Thursday, and she made the most of it.

“It was good to see her rockin’ and rollin’ there,” coach Kelly Edwards said.

Xiao threw five shutout innings and also cranked a home run to center to break the game open early, as the Churchwomen rolled to a 13-0 shutout of Inter-Ac rival Germantown Academy.

Episcopal Academy’s Karen Xiao on the mound during the Churchwomen’s game against Germantown Academy on Thursday, April 18, 2019. (Gene Walsh/MediaNews Group)

“Emma and Karen are both really phenomenal pitchers,” said Edwards after she saw her team rise to 11-2 on the season. “They’re perfect, and Elliana Hopple is a new sophomore this year and she’s a blessing behind the plate.”

Also perfect is the Churchwomen’s record in the InterAC — 5-0, with a showdown against Penn Charter scheduled for Tuesday on the road.

Episcopal jumped out to a 5-0 lead in the first, thanks to RBI singles by Belle Volatile and Kaila Lingo, and a three-run homer by Xiao.

“They are hitting very well. They have been very strong,” Edwards said of the lineup. “We have seven sophomores this year and they have really come together and built the team.”

The top three of Episcopal’s lineup — Hailee Moran, Emma Tansky and Belle Volatile — all had multiple hits. Volatile and Grace Smith each drove in runs to help make it 10-0 by the third.

The Churchwomen capped the scoring in the fifth when Moran doubled and came around to score on an error, and then Caroline McCreary singled in a run, with an additional runner coming home on an error to make it 13-0.

The young Patriots (0-5, 0-5 Inter-Ac) got a leadoff single by Sarah DiLello to start things off in their first at-bat, and later in the contest, DiLello went on to turn a nifty double play at short.

Her younger sister, Charlotte DiLello, made a diving catch in left field and freshman catcher Caitlin Szura — making just her fifth start behind the plate — continues to make strides.

“Those are all positive things,” said coach Brett Pulli, whose team is in action again Tuesday at Springside Chestnut Hill. “I wanna see them get experience. I want them to see pitchers at this speed. They know that they’re building.

“As long as we stay in a place where everyone’s positive and we continue to gel as a team, we’ll be looking at the next three years as a building process to get this program back in line.”

After Sarah DiLello’s single in the first, Xiao settled in nicely, at one point striking out six in a row between the first and third innings. She gave up just three hits while striking out eight with no walks.