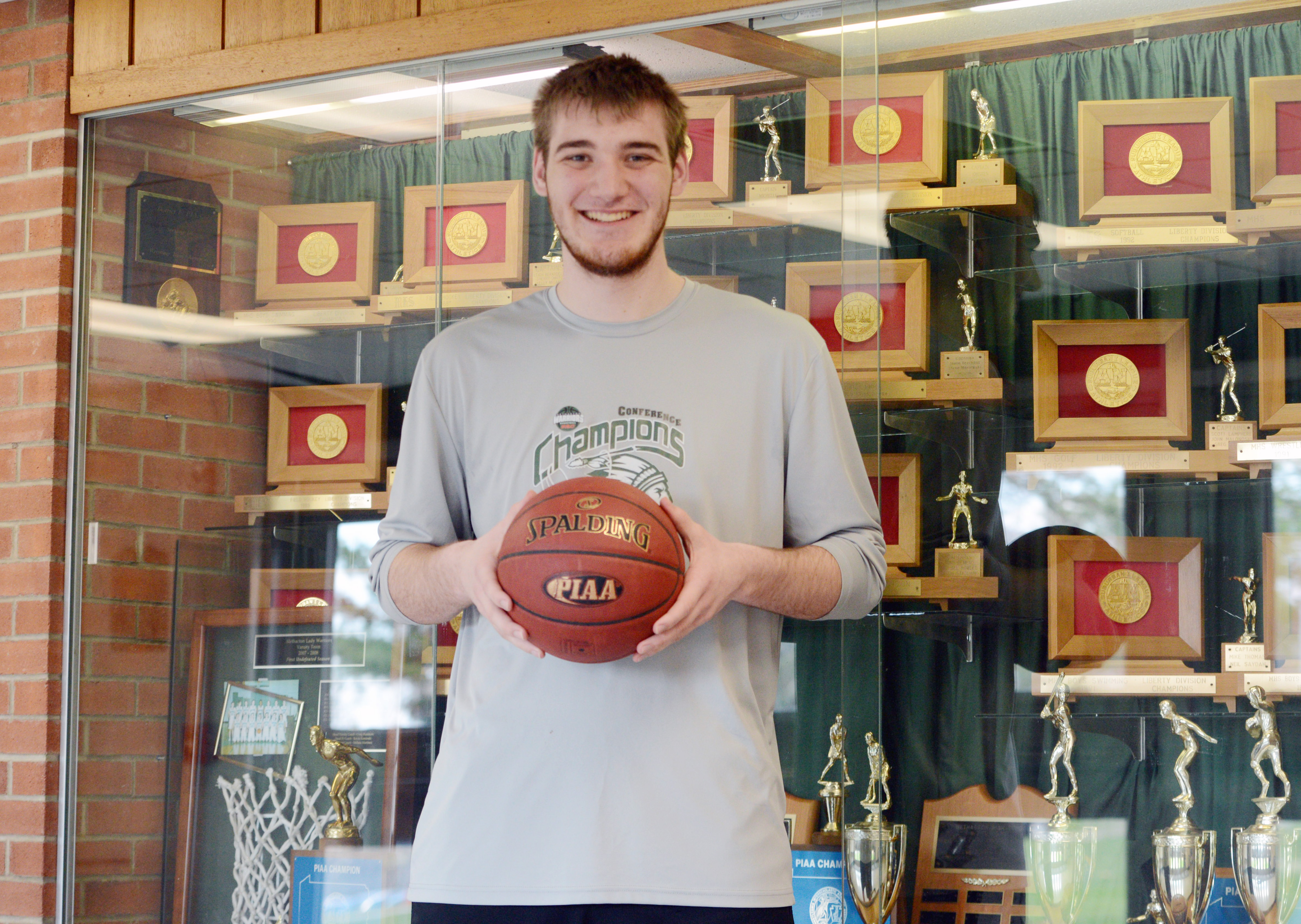 Woodward, now a 6-foot-10 junior forward at Methacton, was then a 6-5 freshman on the Warriors who was still growing into his body.

“He claims he (dunked), and it would be one of those where he skims the rim and it bounces in,” Duda said.

Then came a summer league game before Woodward’s sophomore season. With traffic surrounding him in the paint, Woodward went up with two hands and slammed it in. It left his teammates shell-shocked, Duda said.

Over the past two seasons, those types of plays have become routine for Woodward. The Warriors’ man in the middle was a dominant offensive and defensive force this past season, helping lead the team to second straight Pioneer Athletic Conference title and a trip to the PIAA Class 6A quarterfinals, the deepest state playoff run in school history.

Along with leading the Warriors’ to unprecedented success, Woodward’s growth over the past two seasons earned him The Mercury’s 2018-19 All-Area Player of the Year.

“There were growing pains,” Woodward said. “I’ll go back and watch film from freshman and even sophomore year, and to see how far I’ve come from there until now is just huge gains.”

When Woodward arrived at Methacton, the Warriors’ roster had nine seniors, including his older brother, Greg. Duda said despite the team’s pleading, Woodward was scared to shoot at times, in fear of messing up for the seniors. Woodward concurred, saying he deferred to the upperclassmen as a freshman and then somewhat as a sophomore in 2017-18, when he scored 11.8 points per game.

Methacton ended last season with a loss to Perkiomen Valley in the first round of the District 1 playoffs. Duda, who has known Woodward since elementary school, said it brought out a side of him he had never seen.

“He’s kind of a happy go-lucky guy, but that game really actually bothered him,” Duda said.

The two texted after the loss about making sure things were different this season. Woodward knew for that to happen, it started with him.

During the summer, Woodward prepared to become the go-to-guy for the Warriors. Even more than a development in skill level was a change in mindset. Methacton head coach Jeff Derstine noticed a tick in Woodward’s confidence after a summer league matchup with Plymouth-Whitemarsh center Naheem McLeod, a seven-footer headed to Florida State next year.

Woodward averaged 16.3 ppg this season, third-best in the PAC, to go along with 13 rebounds and 2.5 blocks. The result for the Warriors was a second straight PAC title, a run to the District 1-6A quarterfinals and trip to the state quarterfinals.

“The offense kind of really ran through me,” Woodward said. “It was, ‘Get the ball to Jeff. If there’s doubles, he’ll find you. If not, let him go one-on-one in the post.’ That aggressiveness and that mindset that I have to be scoring to put pressure on the defense, to open up shooters, to open up everyone else, that was a lot to do, but I welcomed the challenge.”

Derstine first got a glimpse of his future star big man when Woodward showed up to one of the Warriors’ mini-camps as a fifth grader. Woodward already was dominant in stature among his peers. Capable of scoring every single time he touched the ball, Woodward instead chose to include his teammates.

Woodward averaged 3.1 assists per game this season, and his passing ability made the Warriors’ offense nearly impossible to completely shut down.

Opposing coaches were forced to let Woodward go one-on-one in the post or double him and leave sharpshooters like Duda, Erik Timko, Brett Eberly and Ben Christian open behind the three-point line where Woodward would gladly hit them with a pass on the money.

“You could just see his unselfishness from fifth or sixth grade,” Derstine said. “Yeah, I can dominate, but let me find a way to involve my teammates and make sure they’re included … That unselfishness is very evident now as he’s playing at the high school level.”

Woodward has spent the past several seasons doing individual skill work with Methacton junior varsity coach Dave Ford. Ford, a teacher at the middle school, has been giving tips to Woodward since seventh and eighth grade.

He also credits some of his development to senior Aiden Hazlett, who has challenged him in practices the past two seasons, taking away Woodward’s go-to moves and forcing him to develop new ones. During the summers with his AAU team East Coast Power, Woodward’s practice partner is West Chester East forward Andrew Carr, a Division I prospect.

“To play as much as he does, to put in the amount of work that he does, you have to love it,” Derstine said. “And you can see that in really all aspects of what he brings to the table.”

The potential for Woodward has always been there since the doctor told him growing up that he would end up about 6-8 or 6-9. When he came to Methacton as a freshman, there was already talk of Woodward as a Division I prospect.

Playing at that level was not only a dream of Woodward’s, but also something he knew he was capable of accomplishing. Woodward’s first Division I offer came last month while on a visit to American University.

“It has somewhat been a validation, but never to myself,” Woodward said. “I’ve always known I can be a good player, and I just enjoy playing the game. I put in the work because I love playing the game.”

“I think the validation came for the people who doubted me,” he added. “The people who said, ‘Oh, he’s only starting on varsity as freshman because he is 6-5.’ You ignore the skill level. You ignore everything at that height. There are a good amount of people who are this tall who aren’t great basketball players, who don’t have the game or can’t put it all together for whatever reason.”

Woodward’s shining moment this season may have come in the Warriors’ victory over Boys’ Latin in the second round of the PIAA state playoffs. After an early Methacton advantage, Woodward got in foul trouble and his absence from the court let Boys’ Latin take the lead early in the second half.

He returned to the court soon after and finished with 27 points and 25 rebounds to help the Warriors’ claim the history-making win. Three powerful Woodward dunks were the highlights of the game.

“That just goes to show you the development that went on the past two years,” Duda said. “From not being able to dunk to having three a game.”