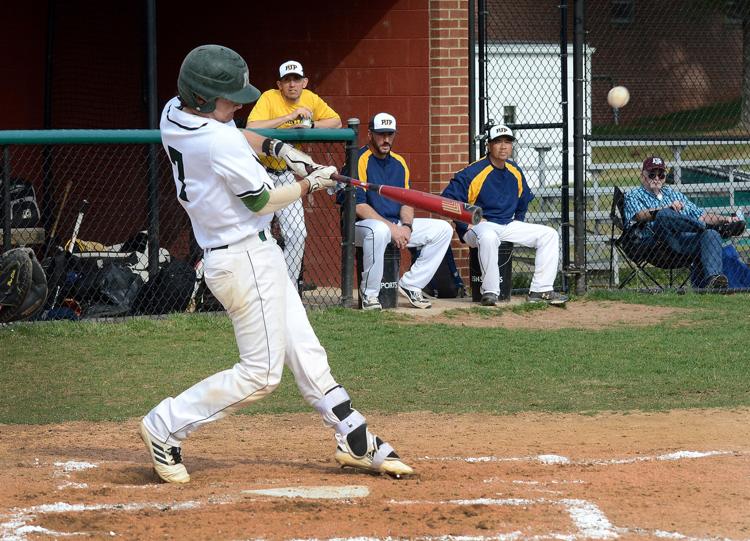 The Warriors lost Pioneer Athletic Conference games to Perk Valley and Upper Perkiomen last week and appeared to be on their way to a third straight loss against Pope John Paul II Monday afternoon.

Methacton trailed by three runs in the third inning and two runs with one out in the bottom of the sixth inning and nobody on base.

Three consecutive batters reached base with one out and all three scored to lift the Warriors to a 5-4 PAC win over the Golden Panthers at Methacton High School.

“It was enormous,” Methacton center fielder Ryan Sheridan said of the win. “We started off the season great with two huge wins and I think that kind of got to our heads a little bit. Hopefully this is the spark that we needed to turn it back around.”

Mike Daddazio started the one-out rally, working a walk. Ben Boyle entered as a courtesy runner and reached second on a wild pitch. Kevin Trafford followed with a single and moved to second on another wild pitch to put two runners in scoring position.

Sheridan followed and hit a blooper down the right field line. Sheridan hustled out of the box and when the ball found space between three Panthers fielders Boyle crossed the plate to make it 4-3, Trafford moved to third and Sheridan was on second with a double.

Pope John Paul II’s infield was in protecting a one-run lead and Trevor Rambo hit a grounder to shortstop. Trafford got a good jump and scored to tie the game while Sheridan advanced to third and Rambo got thrown out at first.

“We were really good on the bases today,” Methacton coach Paul Spiewak said. “Kevin Trafford’s read — we were not green on the groundball that Kevin scored. With their infield in we were yellow, which is a read. That was not an easy read. It was a fairly routine groundball to the right, but it held up just enough. If he doesn’t get as good of a jump as he did I think there’s a chance at a play at the plate. That might have been the heads up base-running play of the game.”

PJP made a pitching change, bringing in Nik Rubendall to face Perry Corda with two outs and the go-ahead run on third. The second pitch of the at-bat got away from the catcher and Sheridan raced home to give the Warriors a 5-4 lead.

“I saw the catcher,” Sheridan said, “he was struggling a little bit throughout the game. Coach told me we had our 2-3 hitters up, so he said, ‘Be cautious because those are our best hitters. I know that they’re going to produce, but if you have the opportunity don’t be afraid to take home.’ On one of the first pitches it bounced over the catcher’s glove and I decided that I’ll take it.”

The bottom of Methacton’s lineup did damage throughout the game. Daddazio, Trafford and Sheridan — the 7-8-9 hitters — each reached base two times. Daddazio hit an RBI double to tie the game at 1 in the second inning.

The Pope John Paul II bats went silent after taking a 4-1 lead in the top of the third inning, sending the minimum nine batters to the plate over the fourth, fifth and sixth innings.

“We looked like we tried to shut it down a little bit offensively and I think they were happy with four thinking OK we have enough,” Panthers coach Josh Hartline said. “I just got done telling them you have to keep putting it to them, take the life out of them and keep going at it. We didn’t and we settled and one bad inning, you lose 5-4.”

Pope John Paul II’s Sam Anders gets back to first as Methacton’s first baseman Logan Rambo puts on the tag during their game on Monday, April 8, 2019. (Gene Walsh/MediaNews Group)

The visitors had a chance in the top of the seventh when leadoff man CJ McCafferty was hit by a pitch. Ryan O’Neill popped out on a bunt attempt and — after McCafferty stole second — Methacton pitcher Ben Christian tallied a strikeout and forced a fly out to close the win.

The failed bunt attempt was one of a few mistakes PJP made. In the sixth inning Zach Hamilton reached on a two-base error to stand on second with one out. He got picked off to stall the threat. In the third inning, Bryan Brendig got thrown out at home with one out.

“I just addressed that after the game,” Hartline said. “I said, ‘Guys, we got picked off at second base with nothing on and nowhere to go.’ And the bunt we didn’t execute after he hits the leadoff batter in the seventh. I said, ‘They’re giving us a run and we can’t execute.’ It was a big part of it. That’s what’s hurt us all year.”

A big reason why the Panthers bats went silent was Methacton pitcher Robert Maloney. In 3 1/3 innings Maloney struck out two batters to no walks and allowed no hits or runs.

“(Maloney) sort of fits the mold of what we’ve been talking about,” Spiewak said. “In this league if we play good defense, which we did while he was pitching — we didn’t play great defense for (starter) Ricky (McDonald) — but if you can work quick and throw strikes, somehow it always seems to workout that your team plays good defense behind you when you’re pummeling the strike zone. That’s what he did.”

PJP took a 1-0 lead in the top of the first. O’Neill singled, advanced to second on a groundout and scored on a John Wagner base hit.

After Daddazio’s double tied the game, the Panthers added three runs in the third to make it 4-1. Bendig had an RBI single and Hamilton scored two with a double.

Methacton’s Conor Smith made it 4-2 in the bottom of the third with a solo home run. He was 2-for-3 on the day, adding a double.