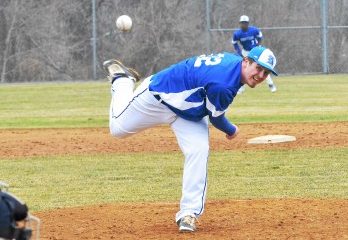 Norristown 6, Pottstown 5, 9 inn. >> Dom Proietto fittingly got the final out as Norristown held off Pottstown in a nine-inning battle.

Proietto, who had a home run and double in a 2-for-4 day at the plate, got the final out on a strikeout after the Trojans scored two runs in the bottom of the ninth to answer Norristown’s three-run top half after the game went to extras tied 3-3.

David Hicks gave Pottstown a solid pitching performance, allowing three runs on seven hits over seven innings but did not figure in on the decision. The Trojans, which managed only three hits off five Norristown pitchers, got a double and two stolen bases from Josiah Wiggins.

Owen J. Roberts 11, Upper Merion 3 >> Sam Morris and the Wildcats broke out in the late innings to beat the Vikings.

Down 3-2 entering the sixth, OJR took the lead with two runs in the sixth and broke it open with a seven-run seventh. Morris was 4-for-5 with a double, home run and three RBI. Other offensive leaders for OJR were Jon Hannevig (3-for-4, 3 RBI) and Casey McGinley (2-for-4), in support of winning pitcher Ben Samuelson, who went six innings, allowing three hits, three runs to go with nine strikeouts.

Boyertown 8, Upper Perkiomen 3 >> Shayn Horrocks was 3-for-4 and Billy Coleman doubled twice as part of the Bears’ 12-hit offense in a PAC win.
Patrick Wieand got the win, allowing three hits and one run in four innings. Chris Davis was 2-for-3 for Boyertown (3-2).

Jason Smiley went 2-for-3 with a triple and three RBI to lead the Rams at the dish. Hunter Curley got the win on the mound, striking out four batters in three scoreless innings. He also drove in two runs at the plate. Pottsgrove’s Cam Mowery got a hit in his only at bat, driving in the Falcons’ two runs.

Wilson 10, Daniel Boone 2 >> The Bulldogs took control with a five-run fifth inning and went on to a Berks I win over the Blazers.

Brady Gibble was 2-for-4 with a home run and three RBI and got the pitching win for Wilson, going 5 innings and surrendering two runs on three hits, six walks and five strikeouts.