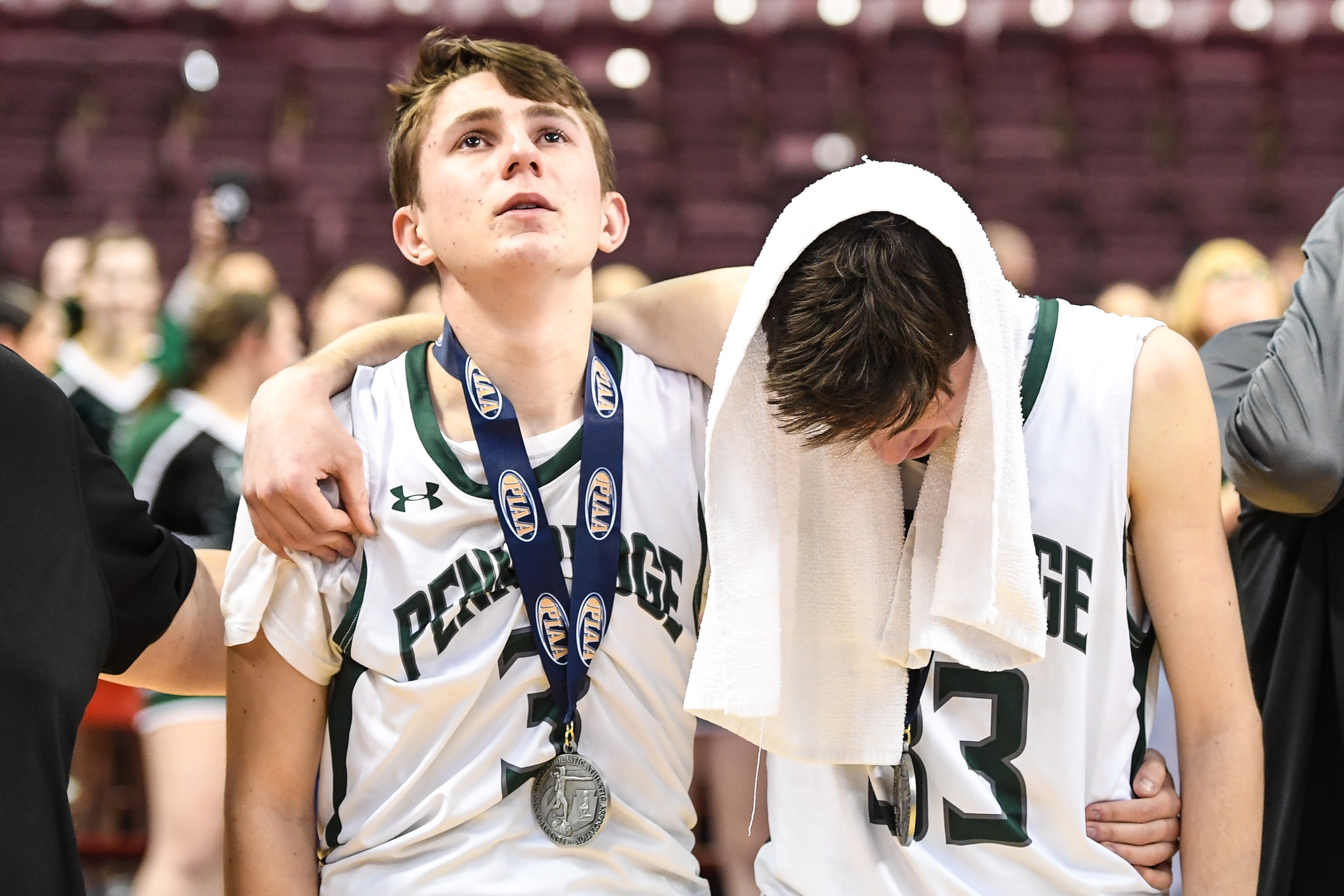 Pennridge's John Dominic (3) and Jack Gillespie (33) after the Rams' double overtime loss to Kennedy Catholic in the PIAA Class 6A boys championship game at the Giant Center in Hershey on Saturday, March 23, 2019. (Mark Palczewski/For MediaNews Group)

HERSHEY >> It was a singular moment that summed up Sean Yoder and Pennridge basketball.

Kennedy Catholic’s Oscar Tshiebwe looked like he was about to power in a wide-open dunk when Sean Yoder rose to meet him at the apex. Yoder rejected the future McDonald’s All-American at the rim, saving a sure basket by throwing everything he had into the play.

As the Rams filed out of the locker room, half of them limping with various injuries, others dragging along drained by sickness and a double-overtime game, all the evidence was there of how much they had given.

Pennridge gave everything it had, but came up just a few points short as the Rams fell to Kennedy Catholic 64-62 in double overtime in the PIAA 6A state title game at Hershey’s Giant Center on Saturday.

“We were down one at that point, it would have been selfish of me if I didn’t go up for the block but in that moment, I was just doing anything I could to win,” Yoder said looking at a still image of his block. “I had to do anything I could to keep the game alive and have the possibility to win. That’s one of the plays that shows what I’m all about, I just want to win.”

On paper, it wasn’t supposed to be this type of game. The Golden Eagles, who ran roughshod over Class A in winning three straight titles, jumped all the way up to 6A this year with a roster loaded with Division I prospects from all over the world.

For the moment, Yoder is the only player on the Pennridge roster committed to play in college. But this group of Rams, which went through Lincoln, Abington, Methacton and La Salle to reach Hershey for the first time in school history, wasn’t worried about who was on the other side.

“You have to take them like you’re just as good as them,” Pennridge senior Jon Post said. “If you think of them as these top guys, they’re going to destroy you and you’re going to let it happen. You have to go in there with the mentality that I can guard this guy and I can play with anyone. That’s the mentality I had when I was out there.”

Nick Dunn (10) and Trent Fisher (23) of Pennridge walk off the court while Kennedy Catholic celebrates in the background in the PIAA Class 6A boys championship game at the Giant Center in Hershey, PA on Saturday, March 23, 2019. Mark Palczewski/For Digital First Media.

Pennridge didn’t get caught up in Kennedy Catholic’s game. The Rams stayed patient, worked their offense, trusted each other and played stellar defense even as their teammates started to drop around them.

Pat Gillespie, the hero of the La Salle win, went out in the third quarter when he was hit in the head while John Dominic was limited after Tshiebwe blocked his layup attempt at the end of overtime and all 6-foot-9, 230 pounds of the West Virginia recruit landed on Dominic.

Luke Yoder battled illness all day and poured it out in a terrific effort on both ends of the floor. Nick Dunn, who’s been limited all season by an injury, was pressed into service and hit two key foul shots in the second overtime while Pat Gillespie contributed a crucial three.

“I’ve been thinking about this for a couple days and whether we won or lost, I’m proud of this group, they gave me everything they had,” Rams coach Dean Behrens said. “To lose that game in double-overtime, I don’t think it was a lack of effort, I’ll tell you that.

“It’s not complicated; we were trying to win a basketball game. I don’t care what they had or where they got them from.”

Pennridge led at the end of the first three quarters. The Rams, who were again backed by a massive crowd of green-clad fans, were out-sized but compensated with their effort all over the floor.

Yoder scored a game-high 18 points and his contributions also extended far beyond that number. The senior had another huge rejection of Ike Herster in regulation, dished six assists, had five rebounds and hit the free throws to force the second overtime.

“I want people to remember me for how I played the game,” Yoder said. “I tried to play the right way, help the other guy up, cheer for my teammates and when they had success, be even happier than when I had success. I want to be remembered as a winner, someone who left it all out there and who was a great teammate.”

Pennridge had a 50-45 lead with 2:38 left but the Eagles scored five quick points to tie it. Mattia Acunzo, the Eagles 6-foot-8 forward from Italy heading to Toledo, tied it up 52-52 with a pair of foul shots with 29 seconds left.

Pennridge’s Luke Yoder (1) goes in for two against Kennedy Catholic in the PIAA Class 6A boys championship at the Giant Center in Hershey on Saturday, March 23, 2019. (Mark Palczewski/For MediaNews Group).

After a Rams turnover, Luke Yoder came up with a steal then found Dominic, only for his shot to be swatted by Tshiebwe. The Rams didn’t get a call there and they didn’t get a call at a number of other spots in the game, but Post said it was just something they had to play through.

“Every single guy that went out there gave it everything they had and that was huge,” Post said. “Down the stretch, when a few injuries came about and with everything else, it was just next guy up. They all came in with 100 percent effort and wanted to win that game.”

Post fouled out with 3:18 left in the second overtime on a call that didn’t make a lot of sense to the Pennridge bench and that allowed Tshiebwe to put Kennedy up for good. The West Virginia recruit had 16 points, adding 21 rebounds (10 on the offensive end) six blocks and seven steals while Maceo Austin had 19 points and Acunzo 18 points.

Trent Fisher and Post each had 12 for the Rams with Post adding nine rebounds and three assists. Both bigs clashed with Tshiebwe and they were integral in keeping the ball moving on offense. Luke Yoder had six points, six rebounds, two blocks and two steals. Jack Gillespie and Dominic each hit big threes before their injuries.

Dominic even tried to come back in during the second overtime, but he was only able to go a few seconds. It still spoke volumes about the Rams.

“We’re relentless and we play as one,” Post said. “Any of those guys that got hurt, it wasn’t ‘I’m going to put my head down and be mad the rest of the game,’ they were cheering the next guy on. That just shows, every one of those guys are my brothers and I’m theirs back.”

As they left the floor, despite all the dejection and empty feelings of finishing second, Behrens and many of the players stopped to salute the remaining fans with a round of applause.

“I think it’s one of the things I’m going to remember most,” Yoder said. “I’m going to remember the whole experience but the community coming out, the fan support, just everything. You grow up with guys, you see them come to the games. You see alumni, everyone you pass wishing you good luck, it’s really, I can’t say enough what they meant to this team, this season, this run and me personally.”

Post agreed, adding the people backing the Rams were the ones they wanted to win for.

“We were never frustrated with each other, any mistake that comes, just pick your head up and get the next one,” Post said. “The whole community has our backs. They really appreciate the way we play basketball, they’ve been coming up to Sean and I and other guys saying we’re making a statement and making them proud.

“We’re doing everything they want us to be doing and that’s something you have to take in. We were role models for a lot of kids tonight, they want to do what we want to do and we went out and showed them what it takes.”

Pennridge poses for a team photo after the PIAA Class 6A boys championship game at the Giant Center in Hershey on Saturday, March 23, 2019. (Mark Palczewski/For MediaNews Group)

Behrens’ greatest regret on Saturday wasn’t a missed shot or a call that went against his team. Instead, it was the fact he won’t get to coach the team’s six seniors again and the entire group of 18, including the JV guys who showed up to practice every day and worked despite their season ending a month ago, won’t be together again.

“I know I can look in the mirror and say I gave everything I had and that’s huge to me,” Post said. “I don’t want to leave with any regrets and I for sure didn’t. We emptied the tank.”

“The last month and a half has been unreal,” Yoder said. “I wouldn’t want to play with any other guys or for any other community out there.”