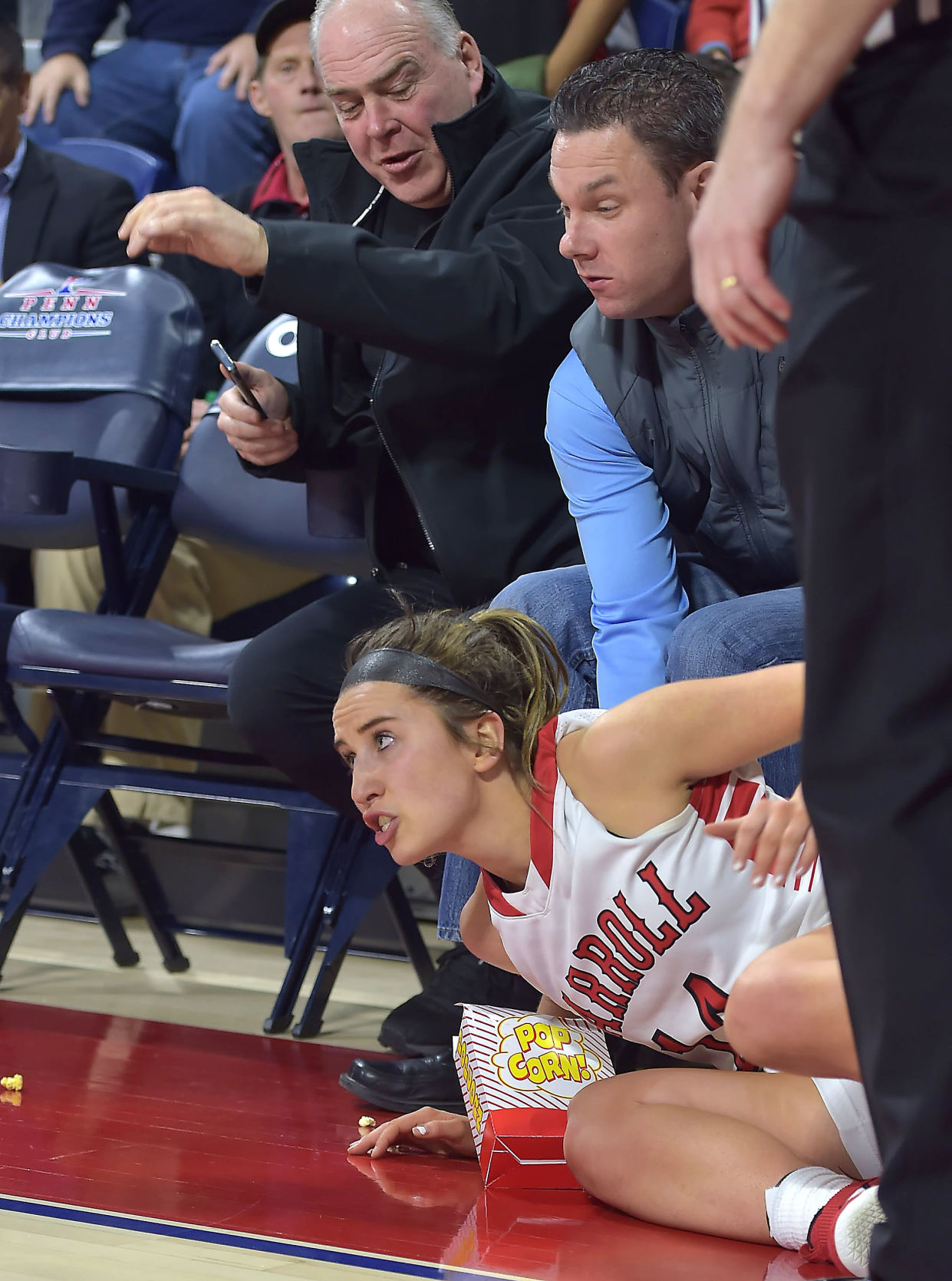 Mary DeSimone, pictured after taking a foul in the Catholic League championship game in February, scored 16 points to help the Patriots defeat Archbishop Wood in a PIAA Class 5A semifinal at Cardinal O'Hara Saturday.

MARPLE — Archbishop Carroll senior Mary DeSimone has had some games in which she could brag about her shooting.

“The first time we played (Archbishop Wood) earlier in the season, I made some of my (3-point attempts),” DeSimone said.

There have been other days when it would have been best to change the subject if anyone mentioned anything about how well DeSimone was shooting. The Patriots’ playoff win over Gettysburg High Wednesday was a game in which she failed to make a field goal.

“When know she can make those shots,” Pats senior Harlem Jennings said of her classmate. “We’ve seen her do that in practice.”

With the chance to qualify for the semifinal round of the PIAA Class 5A girls basketball tournament on the line at Cardinal O’Hara Saturday afternoon, DeSimone found her shooting eye in the second period. After missing two of her 3-point attempts in the opening eight minutes, she was 3-for-3 in the second quarter and knocked down the only long-range shot she tried after halftime on her way to 16 points as she helped District 12 champion Carroll earn a 63-48 decision over Archbishop Wood in a rematch of the Philadelphia Catholic League final also won by Carroll.

Since then, it’s only been a growing experience for the Patriots.

“My confidence may have been down after that (Gettysburg) game,” DeSimone said. “But hitting that first (3-pointer) meant a lot today. We’re playing close to home and we know this floor. Being a senior, you don’t want to see your season end.”

Junior Erin Sweeney, who got her 1,000th career point against Gettysburg, did her best to make sure DeSimone, Jennings and Bridget Hislop would be at practice Monday and playing a state semifinal game Tuesday night against District 11 champion Southern Lehigh (26-3), which knocked off District 1 champ Villa Maria 49-32, in another Saturday afternoon contest.

Sweeney had eight points at the first-period break, pushed that total up to 11 by halftime, and finished with 19 points, three rebounds, three steals, two blocked shots and one assist.

Freshman Grace O’Neill, who was 7-for-8 at the foul line, chipped in with 15 points and three steals, and Jennings, who took only four shots from the floor, added six points, six assists, and four rebounds for Carroll,

“We played a good team today,” Carroll head coach Renie Shields said. “We’ve practiced well the last couple of days, and what we were seeing at practice we saw in this game today.

“All year, we’ve seen what Mary can do, and we knew that in one of these games she was going to be making her shots.”

In the second period, the Carroll offense moved the ball well. Each time DeSimone was able to find herself open on the elbow, Jennings got her the ball for a shot that swished through the net.

“We really focus the whole time we’re at practice,” Jennings said. “We trust in what our coaches are telling us and know that it will work.”

Sweeney got only one field goal after halftime, but added to her point total by going 6-for-7 at the foul line following the break.

“We had the lead, but we still had to keep the defensive intensity up,” she said. “And we couldn’t be afraid to try to attack (their defense). This has been about all that we have done as a team. Since we lost to (Monsignor Bonner & Archbishop Prendergast), everyone has been so focused and dedicated.

“It’s been great, and I know all of us want to do whatever we can to make sure this thing keeps going.”