Wong, Ingraham help get Bonner & Prendergast back to state semifinals 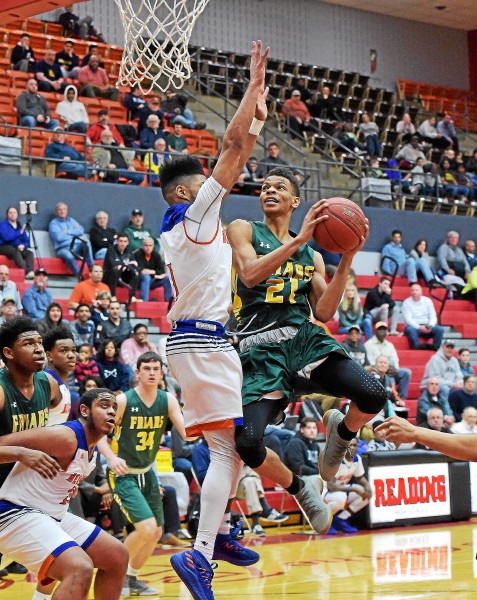 MARPLE — When Isaiah Wong and Tariq Ingraham transferred over to Bonner & Prendergast prior to last season, the expectations for the Friars grew exponentially.

Having both come from out of state (Wong from Notre Dame in New Jersey and Ingraham from Salesianum in Wilmington, Del.), they, along with Ajiri Johnson (Rider) took Bonner & Prendie to new, hyped heights, with an appearance in the Philadelphia Catholic League championship game as well as a trip to the state semifinals.

But Wong noted the Friars needed to realize hype doesn’t necessarily translate into results on the court.

“This year, we wanted to play a lot smarter,” Wong said. “Last year, we felt over-hyped and we got that into our heads. It’s something we still struggle with as a team and I feel like we’re going to continue to work on it going into the next game.”

Tariq Ingraham with the gorgeous post move and the finish with the left hand. He has 13 points and 11 rebounds for @friarshoops pic.twitter.com/Ba18LQ1tNt

They put some of that improved composure to work Friday night with a ferocious comeback against Nanticoke and they carried that into Friday’s clash with neighboring Catholic League rival Archbishop Carroll.

Ingraham recorded a double-double with 13 points and 10 rebounds to go along with two blocks while Wong had 13 points, six boards and four assists as the Friars downed the Patriots, 82-57 in the PIAA Class 4A quarterfinals at Cardinal O’Hara.

With the victory, Bonner & Prendie (21-5) heads to the state semifinals for the second consecutive season. The Friars will take on District 1 champion Lower Moreland (24-3) Monday at a site to be determined.

The Friars started off hot as they hit four three-pointers in the first quarter with Donovan Rodriguez (10 points) drilling two of them to give his team a 10-point advantage. Wong and Ingraham began to assert themselves in the second quarter. Ingraham finished inside past Carroll’s Tairi Ketner then Wong recorded a steal and took it the other way for a layup as Bonner & Prendie led 26-12 at the 7:25 mark of the second.

Later, Wong drove and dished to Ingraham for a two-handed slam on a play that was indicative of how the game had been building to that point. The dunk gave the Friars a 33-19 lead.

“It was tough last year because we were still the hunters, even though we were a one seed and we went to the Palestra,” Funston said. “It was new for all of these guys. This was a brand new experience for these guys having to be the hunted, having an ‘X’ on their back and playing everybody’s best every night.”

Great hustle by Ingraham before the half as he gets the offensive rebound and finds Watson underneath just before the buzzer. @friarshoops leads @ACHSathletics, 22-12 at the end of the 1Q. Donovan Rodriguez has eight points for the Friars. Luke House has four for AC pic.twitter.com/aFnxiHQzhw

Archbishop Carroll (17-11), which lost to the Friars 61-44 in the regular season, never found its rhythm on offense. Leading scorer Luke House had 11 points but shot 3-for-14 from the floor and didn’t hit a three. The closest Carroll would get was 14-12 after a tough finish by Ketner, who also had six rebounds. Ny’Mire Little, Kiyl Mack and Ketner all scored 11 apiece for the Patriots, who only hit one triple through three quarters.

House reflected on the Patriots’ season, the first under head coach Francis Bowe.

“It was hard in the beginning because teammates knew each other but we had a new head coach,” House said. “Throughout the whole year, we just remained solid, kept believing in each other and ultimately made a run.”

Against a determined Friars team, the Patriots just ran into a buzz saw.

Since trailing at halftime against Nanticoke, Bonner & Prendie has played with an edge and the Friars are hoping the “hunt” will continue with a trip to the state title game.