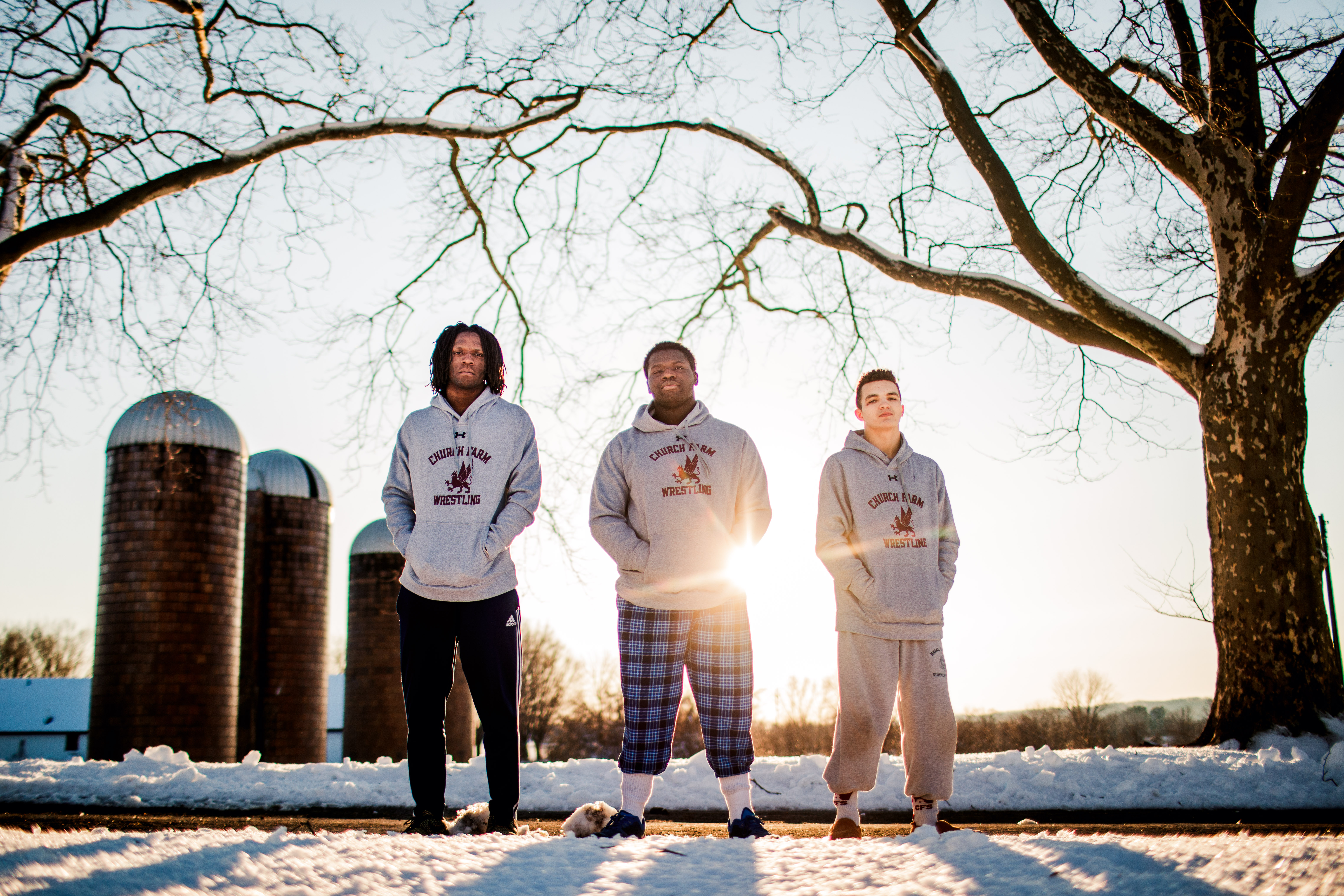 EXTON >> The past three seasons Church Farm has sent a wrestler to the Class 2A PIAA tournament.

Each year, it was someone different, which is impressive in its own right considering the program is known for introducing wrestling to its athletes and building them from the ground up.

Last weekend, all three of those prior qualifiers — Sebastian Corrales, Noel Gilgeous and Emmanuel Lawal — finished top six in the Southeast Regional tournament to punch their tickets to the Giant Center in Hershey. Together.

“We’re happy,” Gilgeous said. “We were trying to do it since this is our last year, so to be able to do it is awesome. We want to see what happens when we’re up there together.”

The 2A tournament begins Thursday morning at 9, with the pigtails, first round and first round of consolations to be wrestled. The 3A tournament follows at 4 p.m. There are 25 qualifiers from Chester County schools (including Owen J. Roberts and Octorara).

Corrales (160 pounds) and Gilgeous (182) are seniors, while Lawal (285) is going back in consecutive years as a junior. Gilgeous did it two years ago after Corrales started the trend three years ago as a freshman.

From an unknown 113-pound freshman, Corrales has wracked the most wins (110) in school history since it joined the PIAA. He is also the program’s first four-time district champion. He bumped up from 152 to 160 in the postseason to avoid Pope John Paul II’s Ryan Vulakh, but still managed to take third in the region with two wins over Boiling Springs’ Nick Kostyak along the way.

“I focused a lot on weight cutting most of my career and I think that kind of held me back,” Corrales said. “I felt a lot more energized (at regionals) and felt stronger after being able to eat and have leeway. It was the first tournament I was able to focus on wrestling instead of weight.”

“Everyone has seen my progression because of the coaches and my teammates, pushing me to get better,” Lawal said. “Now that it’s here, it’s time for me to show what I’m capable of. Last year I made a name for myself, but now as a junior, it’s time to take a medal home, finally for Mr. Smith and the coaching staff and myself.”

The trio has yet to win a match in Hershey, but make no mistake, the goals go beyond just one win. They’re aiming for hardware.

“There’s definitely a friendly competition but it’s a little unfair,” Lawal said with a grin. “I’m the last heavyweight, so they have earlier chances to get a medal. It doesn’t matter, though. We’re all trying to get a medal and get our name on a banner and get recognized.”

The Church Farm athletics accounted tweeted a picture of the three state qualifiers, Friday night, and to the left of the trio was longtime coach Art Smith, smiling like a proud papa. For all the hours spent starting and restarting the process of trying to acclimate junior high and high school wrestlers into varsity competitors, that look of accomplishment from Smith and his crew said it all.

“He was the happiest I’ve ever seen him,” Corrales said of his coach. “Mr. Smith has given so much time and has dedicated so much to us for the last five, six years. He’s been with us the whole way and he’s our biggest supporter.”

Now, a quick look at each of the qualifiers.

After taking fourth at regionals, Manuel starts in the pigtails against a tested senior from Northampton, Ryan Stilgenbauer. Manuel should win, but he’ll have to earn to set up a matchup with Southcentral champ, Aidan Lewis of Cedar Cliff, who isn’t exactly dominant as a top seed. The quarterfinals are possible for Manuel, as is a medal if he gets to his offense.

In the pigtails, Findora gets a rematch with Bethlehem Liberty’s Connor Werner, who won their December bout, 4-3. The favorite in the weight, Seneca Valley’s Dylan Chappell, would be next with a win. To reach the podium, Findora will need an upset or two.

In his second trip to states, McMonagle opens with a very important bout against Meadville’s Vincent Rinella in the first round. A win there sets him up with a much more favorable path to a medal. Bethlehem Liberty’s Tal-Reese Flemming, a third-place medalist last year, would likely be McMonagle’s quarter opponent.

Lucier opens his first trip to Hershey with returning third-place finisher, Kyle Burkholder of Hempfield. Barring an upset, Lucier will need to do his work in the consolation bracket, where he should be able to win a match or two to put himself in position for the third needed to place.

Delaney’s path back to the finals will be much rockier with eight other former medalists in the bracket. His first-round opponent is Mifflin County’s Christian Fisher, whom Delaney beat, 4-2, in the quarters last year. Nazareth’s Sean Pierson, another third-place medalist from last year, is probably next. If Delaney can win his first, he has a good shot to return to the podium.

Hoopes returns to Hershey after competing in the 3A tournament as a junior. After surviving three weeks at a brutal weight in the 2A tournaments, he will be a tough out as he looks for his first win at states. He draws Penn Camrbia’s Chase Proudfit first to get to the third-seeded Bryce Knauf of Greenville.

The draw for Celenza, who’s making his second trip, is about as good as he could ask for as a third-place regional placer. He starts with 13-loss Josh Groff of Garden Spot in the pigtails, and then would get Altoona’s Matt Sarbo, who took seventh at 106 last year but is arguably the weakest of the five regional champs. If Celenza can reach quarters has a shot at hardware.

Viarengo has been wrestling his best the last couple weeks and will need it to get past Bethlehem Liberty senior, Michael Torres, in the pigtails. A loss there would put him in a very tough spot to avoid an 0-2 trip.

Richie’s Revenge Tour continues after defeating Harry S. Truman’s Gunnar Fuss in a regional finals rematch last week. He should reach quarters where he’d likely get Greater Latrobe’s Gabe Willochell, who pinned Richie last season and is the only one to do so in Richie’s career. If Richie can reach the semifinals, it’s probable he’d see either Bethlehem Catholic’s Kenny Herrmann, who eliminated Richie last year, or Shikellamy’s Cade Balestrini, who beat Richie at the buzzer as a sophomore. In his third and final trip, Richie has an opportunity to finally claim a medal.

After not wrestling as a freshman, Amole came back and upset his way to the regional finals and finished second. His reward is returning fifth-place medalist, Zack Witmer of St. Joseph’s Academy, in the first round. Sullivan County’s Ryan Higley, a sixth-place medalist last year, would assumably be next in the quarters.

In his return trip, Barnhart has a winnable first-round bout with Southwest champ, Antonio Amelio, a sophomore with 13 losses. If Barnhart can reach quarters, a matchup with Chambersburg’s Tate Nichter would be compelling. Barnhart is ranked sixth, while Nichter is eighth on papowerwrestling.com. It won’t be easy, but a medal is possible.

A third-place finish at regions lets Corrales skip the pigtails, but he’ll have a tough first-round foe in Peyton Hearnof Conneaut, a sixth-place medalist last winter. Corrales is looking for his first win in two trips to Hershey, and the odds are with him to find it and reach Friday.

The sixth-place medalist returns to add to his collection. As the No. 3 seed, he should reach the quarters where he’ll have a tough go against either Chambersburg’s Luke Nichter or Mariana Bracetti Academy’s Angel Garcia. Nichter majored Hale in December. If he can’t reach the semis, Hale may get a rematch of the regional final with Lower Merion’s James Lledo in the blood round.

DiBernardo has arguably the best draw to the semis of any of the District 1 170-pounders. The Viking, in his second and last trip to Hershey, hopes to take advantage of it. He should win his pigtail to get to Stroudsburg’s Lenny Pinto, who is tough but similarly skilled as a sophomore. A win there might bring Kiski’s Nick Delp, who is also not unbeatable.

A trip to the regional finals clinched Mielnik’s first trek to Hershey, and he’ll start off with a bang against Dallas’s tough senior, Steven Newell. A loss there wouldn’t be the end of the world, as his track back to the podium is doable in the consis.

It’s never a gimme against a Southwest qualifier, but Mousaw should win his pigtail to set up a rematch with Harrisburg’s Nehemiah Diggs. Mousaw pinned him in the blood round last year to clinch a medal. A win there would make Mousaw’s chances at a second medal much higher.

In the final pigtail at 182, Gilgeous faces first-time qualifier, Garrett Henigin of Blairsville, a junior with a record of 28-7. Getting by Henigin would put Gilgeous against Union City’s two-time qualifier, Gavin Henry, who’s 38-3.

Seeley makes his Hershey debut after suffering his first loss of the season in the regional finals, Saturday. He’ll have no time to ease in with Cedar Cliff’s Donovon Ball, who took fifth last year. A win there would help, but even with a loss, Seeley has the talent to reach the blood round where Boyertown’s Jacob Miller may be waiting for a rubber-match.

Pelham injured his ankle at regionals, so his health figures to play a part in his performance. He starts with a pigtail against Easton’s Andrew Balukas, in effort to see Dallastown’s Jamal Brandon. Pelham will need to find his offense to hang around in his first trip to Hershey.

As regional runner-up, Lawal gets Myersdale’s Jalen Stephens, a sophomore making his Giant Center debut. With a win, the big Griffin likely draws Brookville’s Colby Whitehill, who placed eighth last year. Whitehill has 25 pins and is 35-0, while 19 of Lawal’s 29 wins were by fall.

Blevins hopes to follow in his father Ben’s footsteps as a state medalist for Oxford. Ben Blevins took fifth in 1995, and Sam will have to take the long route, starting in the pigtails against Hempfield sophomore, Isaiah Vance. The winner gets Garnet Valley’s Coltin Deery, whom Blevins defeated in the West sectional final. There are no obvious wins on Blevins’ possible paths, but that’s not abnormal for the heavyweight bracket.