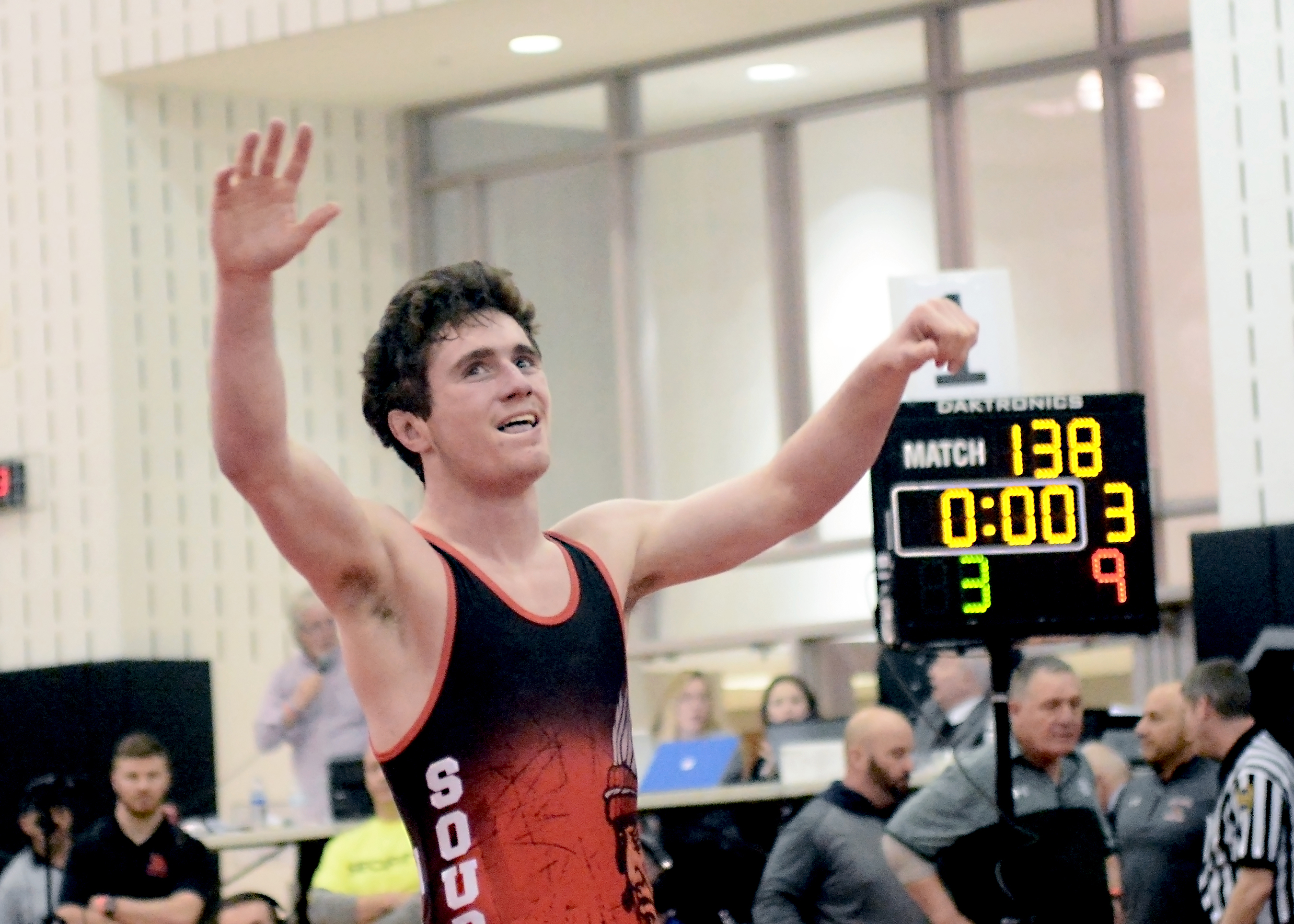 SOUDERTON—Saving the best for last, the tournament directors at the PIAA, Class AAA Southeast Regional tournament, made the hometown Souderton crowd wait until the last match of the night to see 138 pounder Tyler Williams square off against Owen J Roberts’ Antonio Petrucelli in the night’s featured bout.

Tyler Williams picks up a takedown against OJR’s Antonio Petrucelli

Williams made the wait worthwhile for the hometown faithful, cruising to his first regional title with a convincing 9-3 victory. Williams was the lone area champion, but leads a contingent of 10 locals to punch their ticket to Hershey next weekend for the PIAA Championships.

“This just feels amazing,” said Williams. “This is my first regional championship, and to win it in the last match I’ll ever wrestle in this gym in front of this crowd is incredible.”

Williams wasted little time getting out front, hitting a double for the opening takedown, then working a tilt for a couple near fall points and a 4-0 lead after one. After breaking loose for an escape and scrambling for another takedown, it was 7-0 Williams before Petrucelli finally got on the board with a reversal.

Petrucelli picked up an escape of his own to start the third to make it 5-3, but Williams just kept his foot on the gas, working his offense, scrambled for another takedown, and controlled the match the rest of the way for the 9-3 decision.

“This is a culmination of four years of hard work,” said Souderton Coach Tristan Boyd. “He puts in the time all year round and is the most coachable kid you’ll find. His success is not in any way by accident. And I think you’re going to see him step it up again next week.”

Williams and Petrucelli met a week ago in the East Sectional finals, and it was a whole different match, with Williams eking out a 3-2 nailbiter.

“I was just having fun out there tonight,” said Williams. “Petrucelli is tough as nails, so I knew I just had to keep pushing the whole way. I just came in with the mindset that if I was in regional finals in this gym, I was not going to lose.”

William Tennant’s AJ Tamburrino reached the 145 pound finals in another rematch of finals a week ago, against Council Rock North’s Cam Robinson. Tamburrino got out to the early lead with a pair of takedowns, but a Robinson escape and takedown in the second made it 4-4 headed to the third. Though Tamburrino escaped to start the third for a 6-5 lead, Robinson tied it when Tamburrino was penalized for stalling, and then fended off a Tamburrino shot, scooting behind for the winning takedown.

“Both guys wrestled well, I thought,” said Tennant coach Craig Shapiro “AJ was tough when he was aggressive, and that’s the way you’ve got to be against someone as talented as Cam. But AJ is still alive and wrestling next week, and that is nothing to sneeze at. It’s only a few kids that ever qualify for states, and if he wrestles the way he can, he can come home with a medal.”

At 220, Paolo DiSanto of Plymouth-Whitemarsh reached the championship finals, only run into defending state champ Hunter Catka of Sun Valley. Catko picked up the pin over DiSanto, his fourth first period fall of the tournament, good enough the earn himself the tournament’s Outstanding wrestler trophy.

Other area wrestlers to earn a trip to Hershey include a pair of third place finishers in Souderton’s Bruno Stolfi and Methacton’s Tonee Ellis. Ellis won by forfeit in the third place bout at 220, while Stolfi edged Pennridge’s Logan Green 2-1. Green also advances to states.

After defeat in district final, West Chester East looking to bounce back in States
Abrahams lives up to top billing with 100 breast title at Districts