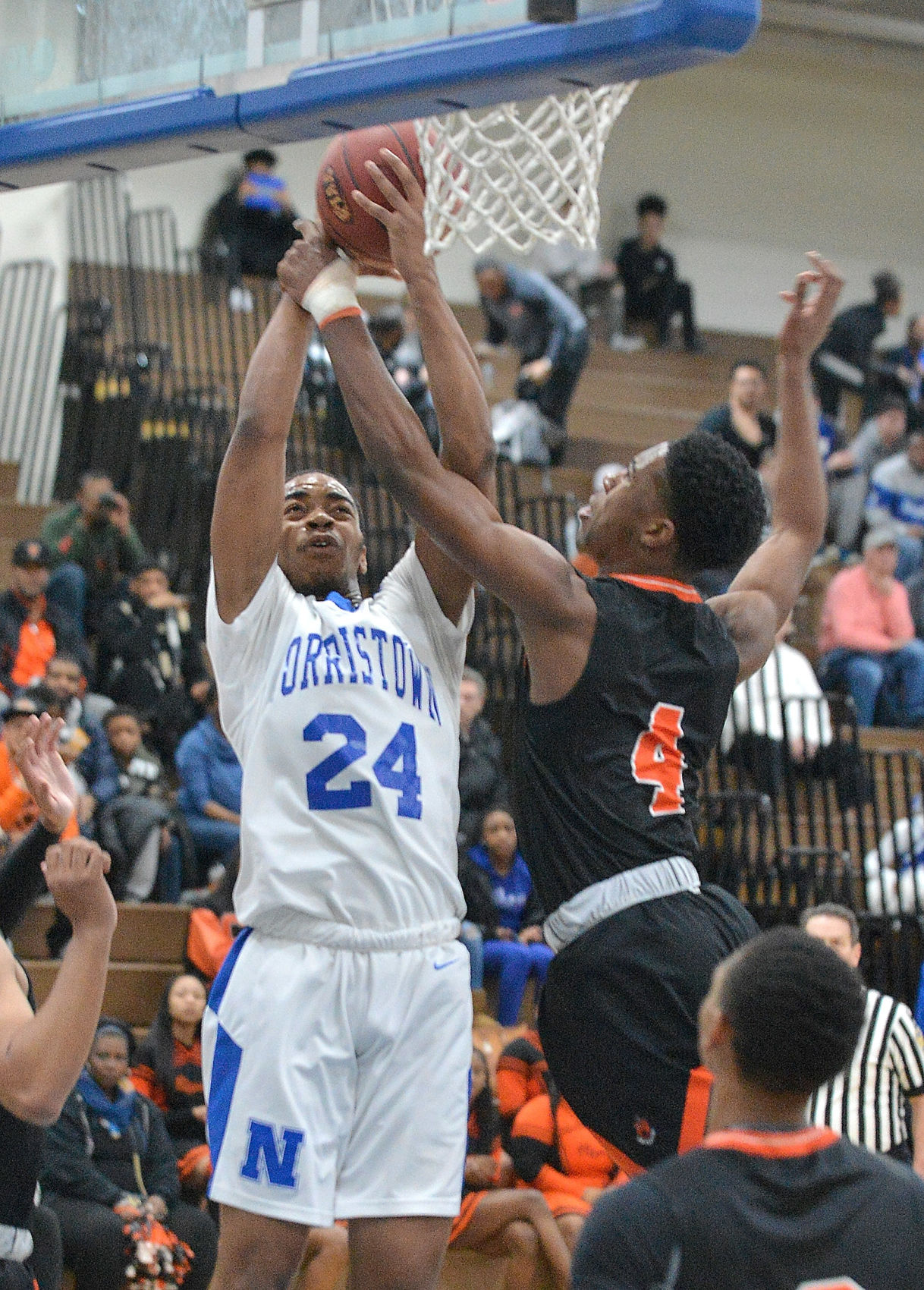 WEST NORRITON >> The Norristown boys basketball team wants to win its district playback games, but with a spot in the PIAA playoffs already secured, the Eagles also want to get their young players experience.

Once of those underclassmen is Nizer Kinney.

The sophomore finished with 16 points and six rebounds to help the Eagles beat Chester, 67-60, in the District 1-6A fifth-place game Thursday night at Norristown Area High School.

After being held scoreless and struggling from the field earlier in the week against Perk Valley, Kinney came out on fire against the Clippers. He was 4-for-4 in the first quarter, scoring 12 points to help his side to an early 22-15 lead.

“It felt good,” the 6-foot-4 forward said of the fast start. “It gave me confidence. I felt like I had to come out and play better than I did on Tuesday.”

Norristown’s Mickeel Allen goes in for a layup as Chester’s Zahmir Carroll defends during the District 1-6A fifth place game on Thursday, Feb. 28, 2019. (Gene Walsh/MediaNews Group)

Kinney didn’t play much as a freshman, but this season he played a key role for the Eagles and earned Second Team All-Pioneer Athletic Conference Liberty Division honors.

“His maturity caught up with his ability,” Norristown coach Dana “Binky” Johnson said. “Now all of the sudden he’s combined them both and we see it — he’s becoming a complete basketball player.

“They say the more time you put in, it benefits you in the long run. Him and coach Joedy Johnson are always the first ones at practice and the last ones to leave … We have some good shooters in this league — you look at (Methacton’s David) Duda, you look at (Perk Valley’s Tyler) Krause. You look at these guys and he sees them night-in, night-out and he has that type of ability and potential. Him and coach Joedy Johnson spend hours before practice and after practice and it shows. I haven’t seen a clean stroke, scoring the ball like that since Khalif (Wyatt) left back in ’08.”

“As a senior watching him develop throughout the season,” senior forward Mickeel Allen echoed, “Nizer is phenomenal. In the weight room he works out hard. He gets their early — last one to finish. He’s always on time. On the court he’s always shooting — he’s the first one there shooting. Saturdays he’s the first one there at like 7:30 getting up shots. I feel like he has a bright future in the program.”

Chester’s Fareed Burton, Jr. drives to the hoop against Norristown during the District 1-6A fifth place game on Thursday, Feb. 28, 2019. (Gene Walsh/MediaNews Group)

“It’s been a tough year for Willie and I’m so happy to see him put it together,” Johnson said. “Sam is one of our underclassmen that was really hampered with some injuries early. The future looks really good with them guys.”

It was Norristown’s seniors, however, that were the difference down the stretch against Chester.

Allen, who scored a team-high 18 points, was ejected from the game after receiving his second technical foul with 2:44 left and the Eagles ahead, 60-48.

The Clippers took advantage of Allen’s absence and crept back into the game.

Norristown seniors Xavier Edwards and Tyler Lyons, however, went 6-for-6 from the free-throw line in the final minutes to maintain a multiple-possession lead that never shrunk to less than five.

The Eagles took control in the second quarter. They forced eight Clippers turnovers in the eight-minute stretch and increased the seven-point lead after the first quarter to 15, 38-23, going into the half. Allen, Lyons and Marcus Sanford each had four points in the second.

Allen’s status for Norristown’s first state playoff game — Saturday March 9 against the District 12 runner-up — is up in the air after being ejected. His second technical came after fighting for a rebound.

“It seemed as though the ref saw it differently than I did,” Allen said. “They called the call. I can’t complain with the call — they called it. I respect it at the end of the day.”

“I have confidence in my team. I believe that with the coaching we have — our coaching staff — we can do a lot of things this season.”