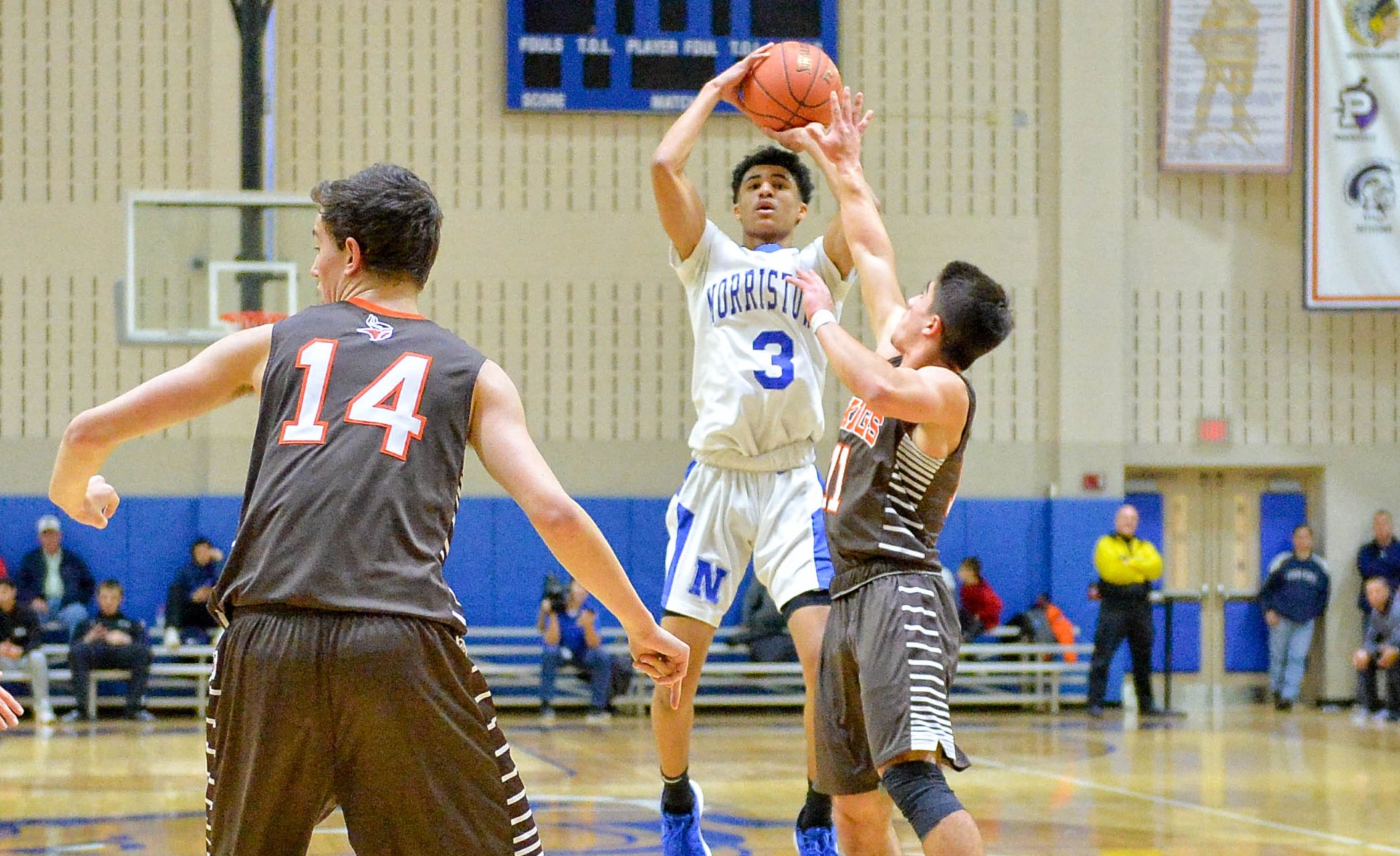 The Pioneer Athletic Conference Liberty Division rivals split their regular season matchups — a couple of games decided by a total of three points — and the Vikings came out on top in the PAC semifinals in overtime.

When the teams got together for the fourth time, it was the Eagles coming out with the win.

No. 5 Norristown used a dominant third quarter to top No. 8 Perk Valley, 41-36, Tuesday night at Norristown Area High School in the District 1 Class 6A playback bracket.

The Eagles advance to the fifth-place game against Chester while the Vikings will face Methacton for seventh place.

Norristown’s victory ties the season series between the teams at two games apiece and, unbelievably, the teams cumulative scores result in a 197-197 stalemate.

The Eagles have leaned on their defense all season and Tuesday night was no different. After leading by one point at halftime, Norristown held Perk Valley to just two points in the third quarter and built an 11-point lead, 35-24.

“The third quarter is not usually our best quarter,” Allen said. “I feel like we really honed in and we were really communicating on the court and also trying to finish out the game.”

“I liked our communication,” Norristown head coach Dana “Binky” Johnson echoed about the third quarter. “We discuss our defensive philosophy of CCBR. I think they really did that great tonight. They communicate, they contest, they box and they rebound and ran. It was a good job of doing it and following through with our basic principle defense. It was excellent to see it all come to fruition in the third quarter.”

The Vikings committed seven of their 15 turnovers in the third.

“We didn’t do ourselves any favors,” PV coach Mike Poysden said. “(Not) Taking care of the basketball, being too quick with shot selection, shooting in the wrong spots at the wrong time. The offense didn’t generate the shot — it was a player going and trying to do too much. In a tight game — and we know it’s going to be a tight game — there is no reason to do that to yourselves. You’re doing damage by forcing up a quick one. Now you have to go back and play more defense.”

Kameron Parks made a layup through contact and completed the three-point play before Zachary Krause hit a deep three-pointer to cut the Vikings deficit to five, 35-30, with 4:32 to go.

Norristown got the lead back to eight thanks to a Samuel Etheridge basket and Allen free throw, but Krause hit another triple to get it back to five, 38-35, with less than two minutes to play.

“Lots of teams at this point in the season,” Poysden said, “looking at the way the game is going and then the fact that they’re already qualified, some teams would lay down and say it’s over, we’ll be in the seven-eight spot. I was proud of that response. I was proud because as a team that doesn’t pressure a lot — we don’t trap a lot — you have to see what it looks like. That was encouraging.”

Parks went 1-for-2 from the free-throw line to make it a two-point game, but that’s as close as the Vikings would get.

After the teams traded a couple scoreless possessions, Tyler Lyons hit a pair of foul shots to make it a four-point Norristown lead and Xavier Edwards went 1-for-2 in the closing seconds to secure the five-point win, 41-36.

Allen posted a double-double for the Eagles with 11 points and 11 rebounds. Etheridge and Lyons each added eight points and Edwards had seven.

Krause led the Vikings with 12 points — all on four threes — and Parks added eight. Senior 1,000-point scorer Tyler Strechay was held to four points — all in the first quarter.

“We play Strechay enough and he’s a very good basketball player,” Johnson said. “When you have nights where you hold a guy like that to four points, it’s a team effort. It’s not one individual. At certain times tonight we had to give guys a rest and put Mickeel Allen on him, who is our post player. At times it was a total team effort on Strechay, then when we were doing a great job on Strechay, there comes Krause.”