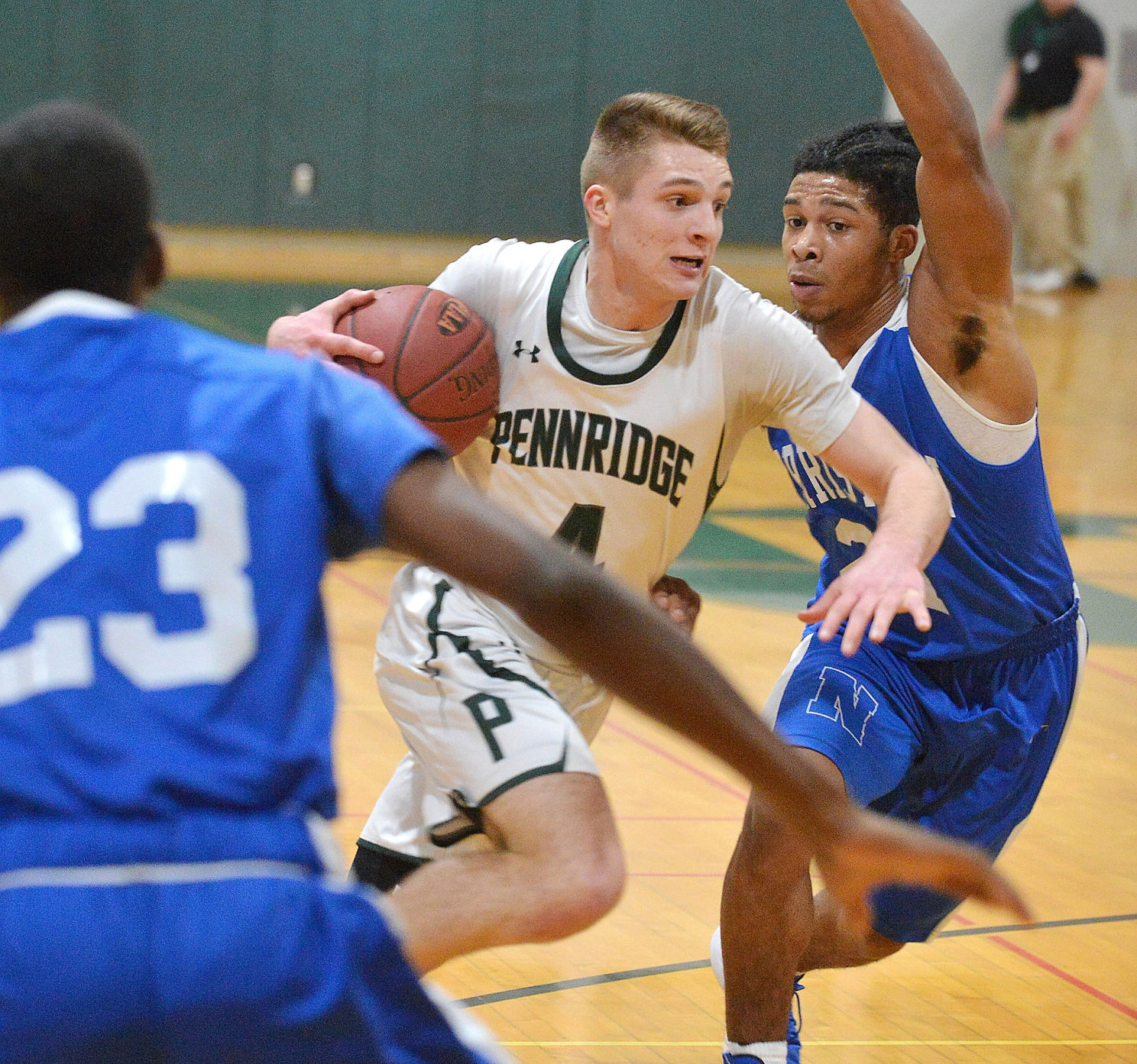 Pennridge's Sean Yoder breaks for the basket between Norristown's Xavier Edwards and Willie Anderson during their District 1-6A quarterfinal on Friday, Feb. 22, 2019. (Gene Walsh/MediaNews Group)

EAST ROCKHILL >> In the final seconds and the win secured Friday night, it finally hit Sean Yoder – the Pennridge boys basketball team was about to do something it had never done before.

“It was like 10 seconds before the buzzer I was like ‘Coach this feels a little more real now doesn’t it?” the Rams senior said.

Behind another stellar outing from Yoder and a strong fourth-quarter defensive effort, Pennridge earned a spot in the District 1 semifinals for the first time ever.

Yoder finished with a game-high 26 points – his final basket making his Pennridge’s all-time leading scorer – while the fourth-seeded Rams held No. 5 Norristown to just four points in the final quarter to pull away from the visiting Eagles for a 51-36 victory in their District 1-6A quarterfinal contest.

“Now when you look at the ratings you see Coatesville, you see Abington, you see Chester, you get Pennridge in there – I mean that’s amazing.”

Yoder scored all 11 of the Rams’ points in the third – knocking down a jumper at the buzzer for a 42-32 lead – while Jon Post collected seven of his 10 points in the first quarter as Pennridge (22-3) held Norristown scoreless over the game’s last 5:05 after the Eagles cut the lead down to 42-36.

“I don’t know what we held them to but our defense was great, especially in that second half,” said Yoder, who eclipsed 2016 grad Danny Long’s school record of 1,359 career points with his final basket of the night. “I can’t say enough about the guys, really proud of them, the way they handled adversity tonight, but really how we stuck together.”

BOYS #BASKETBALL: @PHSRamsHoops’s @sean__yoder with a crossover to get free then knocks down the buzzer-beating jumper at the end of the 3rd quarter vs. Norristown. pic.twitter.com/hESzRNgGNt

The Rams advance to Tuesday’s 7:30 p.m. semifinal against No. 1 seed  and two-time defending district champ Abington at Temple University’s Liacouras Center. The Galloping Ghosts, which defeated No. 8 Perkiomen Valley 53-37, have handed Pennridge two of its three losses this season, most recently besting the Rams in the Suburban One League tournament final 62-52 Feb. 11.

“For us to go to Temple, first time in school history, it’s really surreal,” Behrens said. “I’m really happy for the kids. I wanted them (to make the semis),  I thought this was the team to go.”

Tyler Lyons’ 12 points paced Norristown (19-6), which was without guards Aaron Reddish and Vernon Tubbs for a second-straight district game. Mickeel Allen chipped in 10 points for the Eagles, who were looking to reach the district semis for the first time since winning the 4A title in 2009.

“Our defense travels and we don’t get concerned being down even 15 points or 10 points, whatever the deficit is,” Norristown coach Dana “Binky” Johnson said. “But I thought the difference was we couldn’t score the basketball on the offensive end. And then when we cut it to six, we had a breakaway layup and came up short which could of cut it to four.

“I must say we played with a lot of energy, a lot of effort, a lot of enthusiasm, but at the end of the day you really have to score some points to win a basketball game.”

Norristown’s Mickeel Allen drives to the hoop as Pennridge’s Jack Gillespie defends during their District 1-6A quarterfinal on Friday, Feb. 22, 2019. (Gene Walsh/MediaNews Group)

Norristown now heads in district playbacks for PIAA seeding, hosting Perk Valley Tuesday in the fourth matchup this season between the PAC Liberty Division rivals – the Vikings having won the last two.

In the fourth, a Lyons transition basket in followed by two free throws from Xavier Edwards at 5:05 had Norristown within 42-36 but from there nothing fell for the Eagles. The 36 points were a season low and first time Norristown was held under for since falling to Perk Valley 47-33 on Jan. 30, 2018.

“Hopefully, a lot of young guys that are here tonight and they took notice of the feeling of disappointment when our seniors didn’t get there.”

John Dominic’s layup off a Yoder bounce back put the Rams up 44-36 while Yoder set the Ram’s all-time scoring mark with a drive down the lane for a 10-point advantage.

“Freshman year, I played with Dan – incredible role model, leader,” said Yoder of Long, now a junior on the Monmouth University baseball team. “Just to be up there with those guys means a lot. It’s a lot of behind the scenes work, lot of work that I put in on my own over the years. So very blessed and humbled to be where I am but full focus is on the team.”

“I thought we were strong mentally,” Behrens said. “I told the kids, you turn the ball over don’t worry about it, just stay positive and we’ll get through it. I thought there was a lot, a lot of contact. I mean, there was a ton of contact out there that wasn’t called and our kids played through it.

“We went through a tough spell at the end of the third quarter, beginning of the fourth quarter where we didn’t score but where we did a good job was defensively  they didn’t score.”

Pennridge never trailed in Friday’s contest but Norristown pulled even three times in the first quarter, the last time at 10-10 after a Marcus Sanford floater. The Rams, however, scored the next eight, five provided by Post with the senior’s three-point play at 1:06 giving the hosts an 18-10 edge. Allen’s basket inside off an inbounds made it 18-12 at the end of the first eight minutes.

Allen opened scoring in the second quarter to get the Eagles within four but Pennridge responded with a 9-0 run – Sean Yoder making all three free throw after getting fouled beyond the arc for a 27-14 advantage at 5:08.

“They got out and they got out early and hit shots,” said Johnson of Pennridge. “When they made their first run, I said all right it’s a game us runs but they continued to run into the second quarter, so that was really a hard hurdle to succumb. But second half we were able to make some changes and then cut it to six. So it was very important that we withstood a couple of their runs. They shot the ball very well tonight.”

Norristown collected eight of the next 10 points with a Nizer Kinney triple shortening the Rams’ lead to 29-22 before Dominic drove for a layup and Pennridge went into the break up nine.

After going for 13 points in the first half, Yoder scored all 11 of the Rams’ points in the third despite missing 1:33 of game time dealing with a cut on the back of his head. He went to the sideline with Pennridge up 38-30 and returned the score was still the same.

“Listen, whatever our team needs to win,” Yoder said. “I’m a senior, I got to be the leader of this team, I got to be the gritty guy going to do whatever I need to do, I don’t care what it is, I’ve told these guys that before.”

Lyons found Allen for a layup to make it 38-32 but Yoder scored the quarter’s last four points – driving to the hoop for two then burying a jumper from the right elbow just before the buzzer for a 42-32 lead going to the fourth.