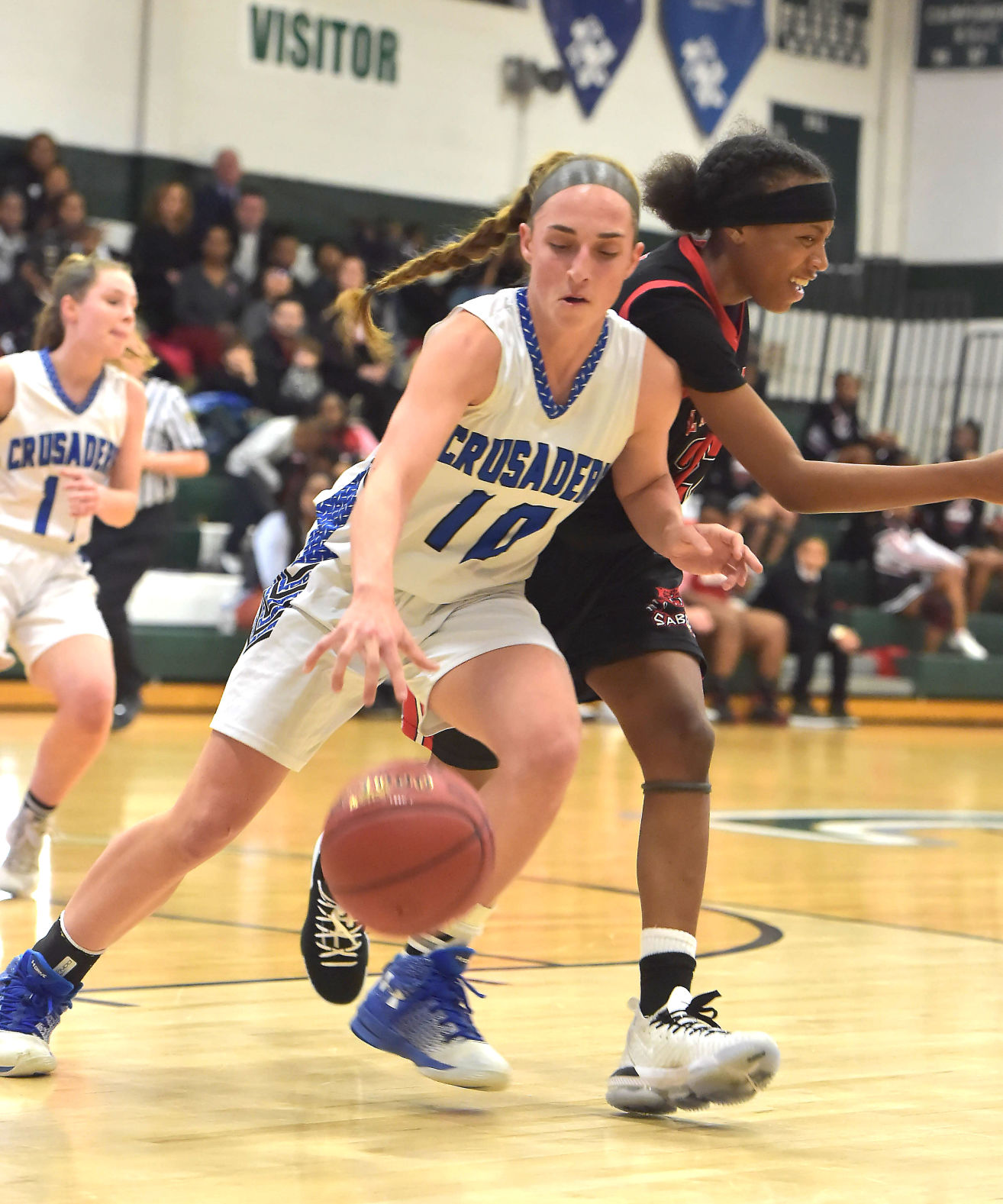 Pete Bannan — MediaNews Gruop The Christian Academy's Grace Gormley corrals a rebound in front of Chester Charter School for the Arts' D'Ayzha Atkinson in the first half at Delco Christian Friday evening. Gormley scored 24 points in a 48-21 win for TCA over shorthanded CCSA.

NEWTOWN SQUARE — Grace Gormley and Britney Dike have an understanding on the basketball court.

Dike will set up in the low post. All eyes will be on Gormley, The Christian Academy’s best player and a 1,000-point scorer.

Dike will then use her size advantage to get in a good position to receive the ball. Gormley will dribble, make the defenders chase, and look to hit Dike with a perfect bounce pass.

In Friday night’s District 1 Class A semifinal at Delco Christian, this offensive sequence happened again … and again … and again. The result was a 48-21 win for the second-seeded Crusaders over No. 3 Chester Charter School for the Arts.

“She can always get it in to me,” said Dike, a senior forward. “I don’t always finish but usually it works. She’s so good at discerning when to pass, too. Everyone is looking at Grace, knowing that they have to pressure her, and she just dishes it off at the perfect time.”

Gormley knows that if Dike is getting her points, the Crusaders are in good shape.

“She’s big in the middle,” Gormley said, “and in crucial times, she’s making her layups.”

Luckily for TCA, it worked like a charm Friday. When Gormley wasn’t dishing inside to Dike, who scored 15 points and grabbed nine rebounds, the senior guard flourished with her shooting and defense. Gormley poured in a game-high 24 points on 10-for-15 shooting, handed out seven assists and made eight steals.

Christian Academy (19-5) plays the winner of Saturday’s game between top-seeded Jenkintown and No. 4 Faith Christian in the district final Wednesday at Lower Moreland High School. Jenkintown is the reigning PIAA champion.

The Christian Academy’s Deasia Speaks (21) goes to the basket past Chester Charter for the Arts’ Keyembrah Blackwell (30) in the first half at Delco Christian Friday evening.

“We knew it was going to be a tough game, either way, and our goals were to stop them in transition and play our game,” Gormley said.

The upstart Sabers, in their second season as a PIAA-sanctioned varsity program, were without their leading scorers in senior guards Logan Handy and Ceyrah Williams. Both players fell victim to PIAA’s new transfer rule, which bans players who transfer to a new school after their 10th-grade season from participating in the postseason unless that player can obtain a hardship waiver.

In addition, CCSA (18-3) also played Friday without starters Yari Laguna and Sierra Le’Bue. Forward Rahnaezah McDonald was the only regular in coach DeJuana Mosley’s lineup, and she was dealing with a torn ligament in one of her thumbs.

Handy ranked as the leading scorer in Delaware County during the regular season, averaging better than 24 points per game. In her final high school game on Feb. 8, Handy scored 48 points and topped the 2,000-point plateau for her career. A transfer from Laurel High School in Delaware, Handy scored 501 points in her lone season at CCSA.

The good news for the Sabers? By making the District 1 tournament, they have qualified for the state playoffs next month. All four teams in districts qualified for the PIAA tourney. The Sabers will play the loser of Jenkintown-Faith Christian for third place next week.

Chester Charter for the Arts’ Jasmin Harper, left, and The Christian Academy’s Grace Gormley dive for a loose ball in the first half at Delco Christian Friday evening.

“Most of these girls out here tonight are coming back (next season) and they need the playoff experience,” Mosley said. “I think we’ll be fine. We were in the game in the first four or five minutes, the score was only 7-6 … but we’re a little short right now. My girls, for the most part, played hard.”

The Crusaders used a 13-0 run in the first quarter to pull away from the Sabers, who committed 31 turnovers. Gormley had 11 points, three rebounds, two assists and two steals in the second period when TCA outscored CCSA, 16-7.

With the knowledge that CCSA was missing its top players, the Crusaders deployed a full-court press, which caused a handful of giveaways.

“We were aware that Logan wasn’t going to play, although I didn’t find out until late,” TCA coach Jason Wilt said. “Realistically, Logan is the main one we had to worry about. I wasn’t sure about the others not playing … so it changed my game plan. I wasn’t sure what they were going to do without them, so I think we did a good job adjusting to what they were throwing at us once I figured it out.

“I knew they were missing ball handlers. With our press, we just wanted to create turnovers. We’re not great in the half court, so we thrive on transition offense and, without their main ball handlers, I felt like that would be an advantage for us. I think it paid off.”

The Christian Academy’s Grace Gormley takes a layup in the first half at Delco Christian Friday evening.

“If Britney finishes the way she did tonight, yes, I’ll take that from her every time,” Wilt said. “Sometimes (Gormley) is a little too unselfish with the ball. … Grace is going to look the pass, even though she is our best player. It’s even better when the players on the court take care of it and finish the play off.”

Christian Academy is playing for a district championship for the first time in Wilt’s tenure as head coach, which spans nine seasons. If their opponent is Jenkintown as is likely, the Crusaders will not think too much about their prior battle. In that game the Crusaders were missing Dike, who could be a difference maker.

Ultimately, TCA simply is happy to be playing in a district final and is looking forward to making another run at a state crown. Last season, the Crusaders advanced to the elite eight of the PIAA tournament.

“It’s going to be tough if it’s Jenkintown, and we’ll do our best,” Wilt said. “Our goal this year wasn’t to win the district final, and I know that might sound bad. We understand that Jenkintown is very good and we’re going to see what we can do. We haven’t played in a district championship in all my years and a lot of that had to do with just getting hurt by the rankings system in years past. This year, it actually worked in our favor. We played Jenkintown the last three years in the semifinal. We should’ve played them in years past (in the final), but we’re glad to have the chance this year and we’ll see what we can do.”