Brown powers Abington past Souderton in District 1-6A quarterfinals 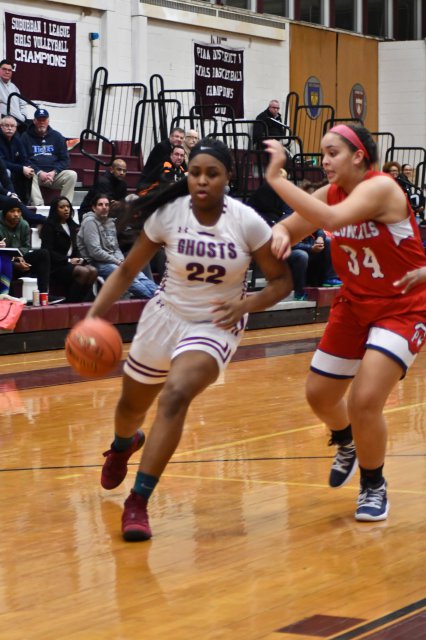 ABINGTON >> Kassondra Brown wanted the ball, so she got it.

The Abington senior forward had been passive in the first half against Souderton, floating around the perimeter and not imposing her presence on the low block despite a size advantage. So at halftime, she made it known to Ghosts coach Dan Marsh and her teammates she wanted the ball.

Brown got it, laid claim to the block and powered her way to 25 points and 18 rebounds as the Ghosts pushed pass the Indians 54-38 in their District I 6A girls’ basketball quarterfinal Friday night at Abington.

“At halftime, I didn’t say much but I had noticed they weren’t doubling me and my shots weren’t falling so I wanted to make my mark,” Brown said. “I just gave it my all.”

When the teams met a few weeks ago, it was a shootout with the Indians claiming a 10-point win. The score after one quarter of that game was 18-13.

Friday, the halftime score was 18-16 with Souderton in front. It was not the same type of game. It also wasn’t surprising, given that Souderton has  been a stout defensive team all season and the Ghosts have really picked up their game on that end since their postseason started in the SOL tournament.

Neither team shot the ball particularly well in the first half, but Souderton never got much going in the second half either, shooting 13-of-50 in the game and just 2-of-11 from 3-point range after halftime.

The Indians’ biggest issue however was the loss of senior standout Megan Walbrant before the third quarter even began. Walbrandt came out on the court, but fell ill before the ball was put into play and wasn’t able to come back in.

Losing not only their defensive ace, but the fulcrum for most of their offensive sets, Souderton had to try and adapt on the fly.

“It’s a pretty significant loss for us,” Indians coach Lynn Carroll said. “We had four guards who didn’t come off the floor for us in the second half and I give them a ton of credit for how hard they kept working. Offensively, we need Megan to run a lot of our sets and get looks for her and defensively, she would have drawn the matchup of Kassondra Brown.

“Now, that kid (Brown) had an unbelievable game, she was determined she was going to win that game and she has teammates who said ‘we’re going to get you the ball.’”

Brown, who had just four points in the first half, started the third quarter with a bucket off the low block and ended up posting 11 points in the frame. Her teammates recognized it as well and kept feeding the beast down low.

Marsh pointed out the Ghosts went to a four-out offense and just has the guards move the ball until one of them had a clear pass into Brown.

After Megan O’Donnell, who left everything she had on the floor, scored to put Soudy up 22-20 in the third, the Ghosts ripped off the next 10 points. Six of the points came from Brown and Cam Lexow’s steal and layup gave the hosts a 30-22 lead.

“I just had to move around a little more,” Brown said. “I kept finding myself on the three-point line wandering around in the first half. My mom, she talks to me a lot during the game and she was telling me to get on the block so I listened to her.”

It was still a five-point game at the end of three and Curran O’Donnell’s trey cut it to 35-31 with 5:43 to go. Abington got the next six, with Brown getting an offensive rebound off a missed foul shot and drawing her own foul to put the Ghosts ahead 41-31.

Even with Souderton trying to speed the game up, the Ghosts stayed controlled enough to close things out and made their last eight foul shots over the final 1:38 to book a spot in the semifinals.

“It means a lot,” Brown said. “I’m just extremely happy right now, we’ve accomplished every goal we’ve had so far and now we can say we avenged all of our losses, so it just feels really good.”

Abington gets defensive to grind out win over Perkiomen Valley in District 1-6A quarters
Yoder scores 26, Pennridge tops Norristown to reach District 1-6A semis for 1st time