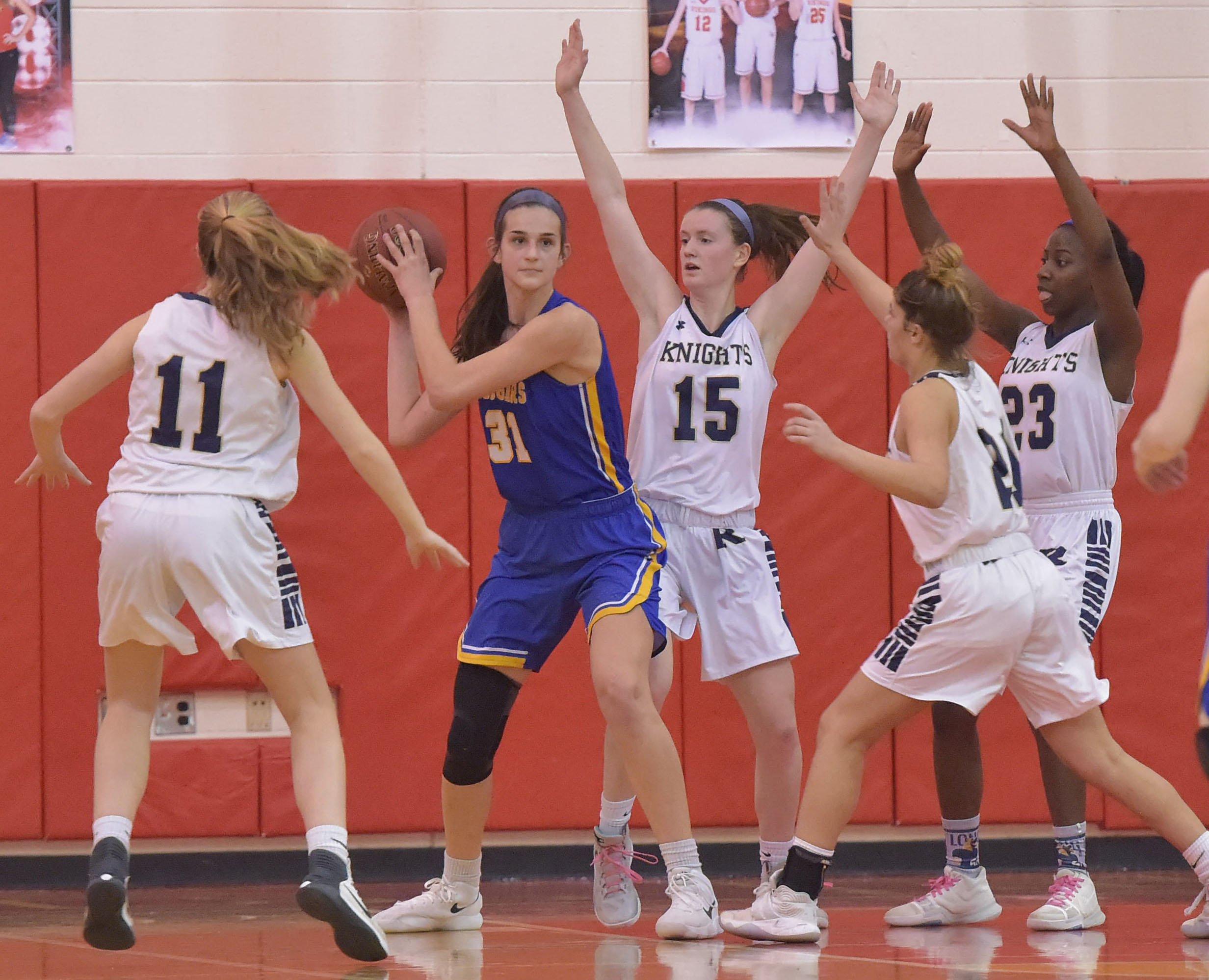 UWCHLAN – Downingtown East punched its ticket into the PIAA Girls Basketball Tournament on Thursday by surviving a combative 54-46 slugfest against a 20-win Methacton squad. And up next, in the District 1 6A Quarterfinals, is top-seeded Garnet Valley.

The eighth-seeded Cougars topped the No. 9 Warriors thanks to another stat-stuffer from 6-foot-5 junior center Bella Smuda, as well as some much-needed help from several of her teammates. East (20-5 overall) led by as much as 13 in the fourth period but had to withstand a late comeback bid by visiting Methacton.

“We knew coming in that it was going to be a war, and it lived up to that,” said Cougars’ head coach Tom Schurtz.

Smuda poured in 20 points, grabbed 20 rebounds and swatted away 12 to register her second triple-double in as many games. And she did it all despite facing double- and triple-teams all evening.

“It doesn’t surprise me,” said sophomore teammate Mary McFillin, who scored 10 of her 13 points in the first half.

“Bella is averaging a triple double this season,” Schurtz added. “She is a force in the paint, especially on defense. She also allows us to do a nice job of pressuring out on guards because they understand that Bella always has their back.

“We filter the ball to her and she does a nice job of cleaning up at the rim.”

East will travel to Garnet Valley on Saturday, with the winner advancing to the semifinals. Methacton (21-6 overall) will host Central Bucks East on Saturday in the playbacks.

“Against (East) you have to pick your poison,” said Warriors’ head coach Craig Kaminski. “(Smuda) is going to score points, but you have to hope the others don’t beat you. We didn’t do that against (McFillin).”

There were several ties and lead changes in the third quarter, but the Cougars scored 14 of the period’s final 16 points to open a 44-34 margin. Freshman Lauren Kent scored five of her eight points during the run for East.

“Our defense was a lot better. In the first half we were having a hard time guarding (Methaction’s) 3-point shooters and boxing out their guards,” Smuda explained.

“I thought we lost our composure offensively in the third quarter with rushed shots and bad shots,” Kaminski added. “That’s going to happen when you are going against a player like Bella. She alters lot of shots.”

The lead topped out at 50-37, but then Methacton roared back with a gutsy 9-1 run of its own, slicing the margin to 51-46 with about a minute to go. Junior guard Sydney Tornetta scored all of her team-high 15 points in the second half for the Warriors, and was a huge part of the comeback. But her 3-pointer with 27.5 seconds on the clock – which would have cut it to two — rimmed out.

Smuda then closed it out by hitting three of four from the free throw line.

“I give my team a lot of credit at the end, the way we battled back,” Kiminski said. “It’s a shame we didn’t string together four quarters like that. At the end, our players wanted to go the state tournament. The energy level came back.”

Methacton’s pressure defense wound up forcing nine fourth quarter turnovers, but the Warriors sabotaged the effort by hitting just 4 of 9 from the line to end the game. In all Methacton went 5 of 13 on freebies.

“We missed too many easy point-blank shots and we struggled from the foul line,” Kaminski said. “So we kind of killed ourselves offensively.”

The Warriors, however, started strong as Nicole Timko (14 points) buried a trio of early 3-pointers and the Methacton press forced three early turnovers. The Cougars, however, seized the lead thanks to a 7-0 run midway through the half that started with a McFillin 3-pointer.

East took a 24-22 lead at the half with Smuda leading the way with 10 points, 10 boards and seven blocks.

“We wanted this win so bad because it was a qualifier for states,” Schurtz said, “We got ahead of ourselves emotionally down the stretch and got away from what makes us a sound basketball team.”

But with help from McFillin, Kent and Cassie Denning (seven points) off the bench, the Cougars did enough to compliment Smuda and advance.

“Every girl on our team can play. Coach Schurtz always says that you never know whose night it is going to be,” Smuda said.

“We have a good team concept,” Schurtz added. “No one player can ever win a game against a team of (Methacton’s) caliber.”