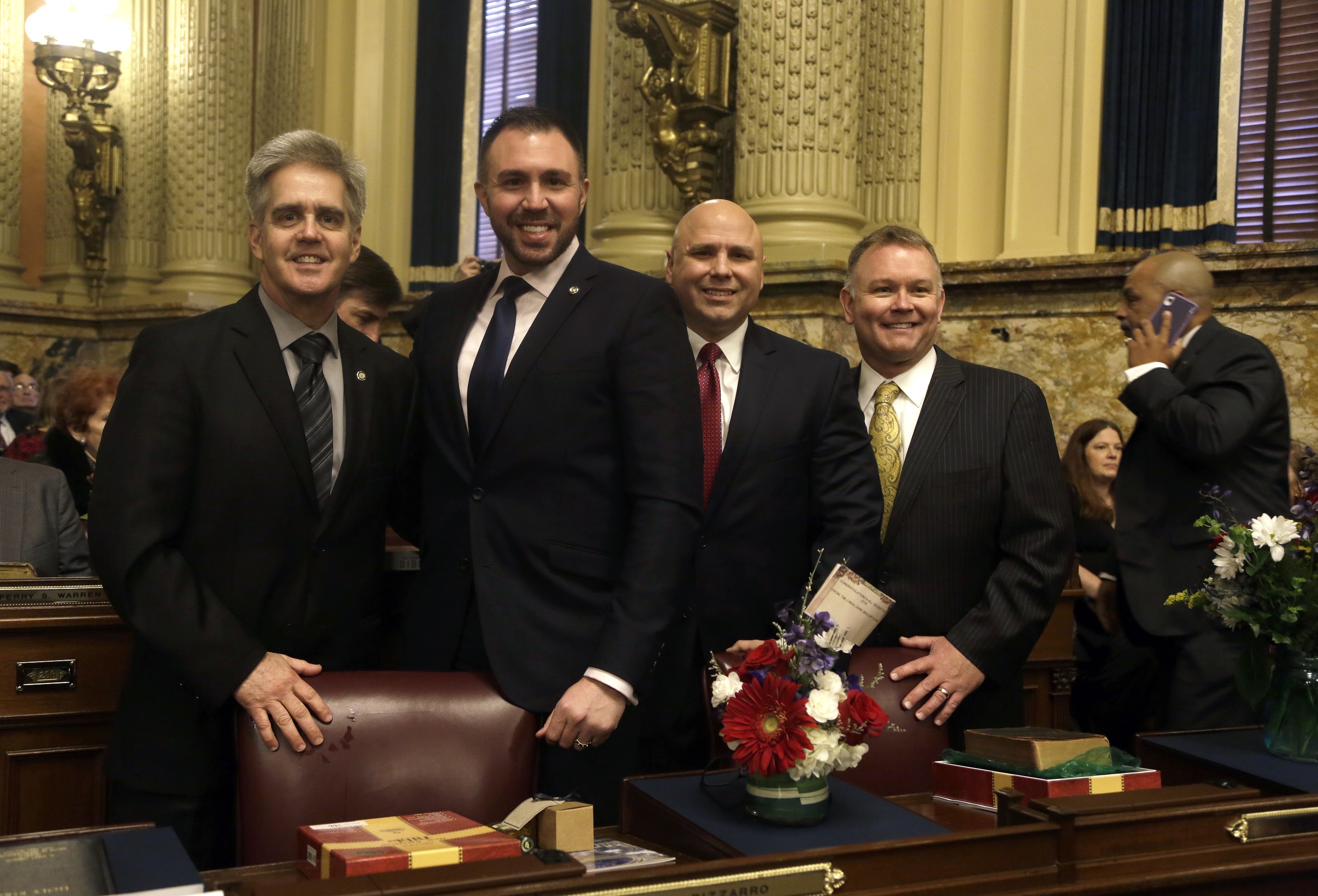 State Rep. Scott Conklin, D-Centre County, far left, poses for a photo while being sworn in for his seventh term in the General Assembly in January. Conklin is proposing legislation that could amend the decades-old statute that prevents the PIAA from separating public and private schools for the purposes of crowning state champions. (AP File)

Conversations about separate PIAA championships for public and private schools, no matter how vociferous the proponents, have always reached the same dead end.

Pennsylvania’s General Assembly, so goes the well-worn logic, would never allow it. The legislature, via Act 219 of 1972, bound together private and public schools under the PIAA; any procedural decoupling of state champs runs counter to that law, by letter or spirit, and opens the threat of litigation or worse.

This week, a maneuver to remove that legislative impediment has presented itself.

State Representative Scott Conklin (D-77) of Centre County intends to propose a bill that would amend that statute in a way that could give the PIAA the ability to crown separate champions.

“One of the reasons we’re doing that is that the PIAA has said that they’re worried that they’d be open to litigation if they pursued this,” Conklin told the Daily Times Thursday. “By passing this piece of legislation, we (would) now allow the PIAA to set these tournaments up, that they can’t be litigated against.”

News of Conklin’s plan was first reported Wednesday night by PennLive.com. He will be discussing the matter at an event hosted by the Pennsylvania Coaches Association Thursday night and could bring the bill as early as next week.

Conklin cited residency restrictions for Little League as an example of the delineation he wants to present, though that argument lacks a parallel for private schools. He raised concerns over lower attendance at PIAA championships due to the same teams perennially reaching finals. And he described it as a safety issue in which schools limited to geographic boundaries simply can’t compete against schools that can draw from across state lines or, as Conklin mentioned several times, anywhere in the world.

“It’s already a well-known fact, the disadvantage that one school may have or one team may have if the other team is able to recruit around the world,” he said.

As to whether Conklin’s bill would mandate separate tournaments or give the PIAA the freedom – via its procedures – to vote on alternative ways to crown champions that weren’t previously available under the law is a crucial yet thus far undefined difference.

Conklin doesn’t intend to restrict meetings between public and private/parochial schools in regular-season contests. He added that moves by the PIAA in recent months to impose stricter rules on eligibility for transferring students are insufficient to address competitive imbalance.

Via a spokesperson, the PIAA declined comment as it hadn’t yet seen the text of the proposed legislation.

The news caught stakeholders on both sides off guard, despite Conklin saying the bill was drafted last year. Sean McAleer, executive director of the Pennsylvania Catholic Conference and a staunch opponent of separate tournaments, hadn’t yet seen the legislation and declined to comment.

Members of the Pennsylvania Equity Committee, a coalition of public schools agitating for change, also hadn’t seen the bill and were surprised it was the first to come to fruition given their discussions with other legislators.

William Hall, the superintendent of the Millcreek Township School District in Erie and one of the founders of the Equity Committee, spoke to Conklin for the first time Thursday. He’s encouraged by early indications that Conklin’s ideas are within the spirit of the organization.

“We didn’t see the legislation, no one from our committee has seen it,” Hall said. “He did tell me snippets of it, and we’ll wait and see what he has tonight and what the legislation looks like on Monday when it comes out. But it looks like we’re talking the same language, which is encouraging.”

The PIAA has for years resisted calls to conduct separate tournaments for public and non-public schools, striking down such measures as introducing definitions of “boundary” and “non-boundary” to its bylaws. In lieu of partitioning tournaments, the PIAA passed measures in the last year to beef up enforcement of activities it believes contribute to competitive imbalance, including postseason bans for transfers after an athlete’s sophomore season and mandatory sit-out periods for in-season transfers.

In the wake of those changes, Hall and other public school administrators (primarily in Western Pennsylvania) convened conferences to discuss their recourses and define a set of shared principles.

Conklin is a seven-term state representative. He ran for lieutenant governor in 2010, on the unsuccessful ticket with Democratic candidate Dan Onorato.

He’s encouraged by the feedback he’s gotten so far to the bill.

“All we’re doing is we’re going to set up two competitive playoff systems with two champions that at the end of the day, if you’re a school that’s recruiting worldwide, you will be playing like schools,” he said. “If you’re a school that’s restricted that you can only recruit within your school district, you will be playing against schools that are within their school districts.”