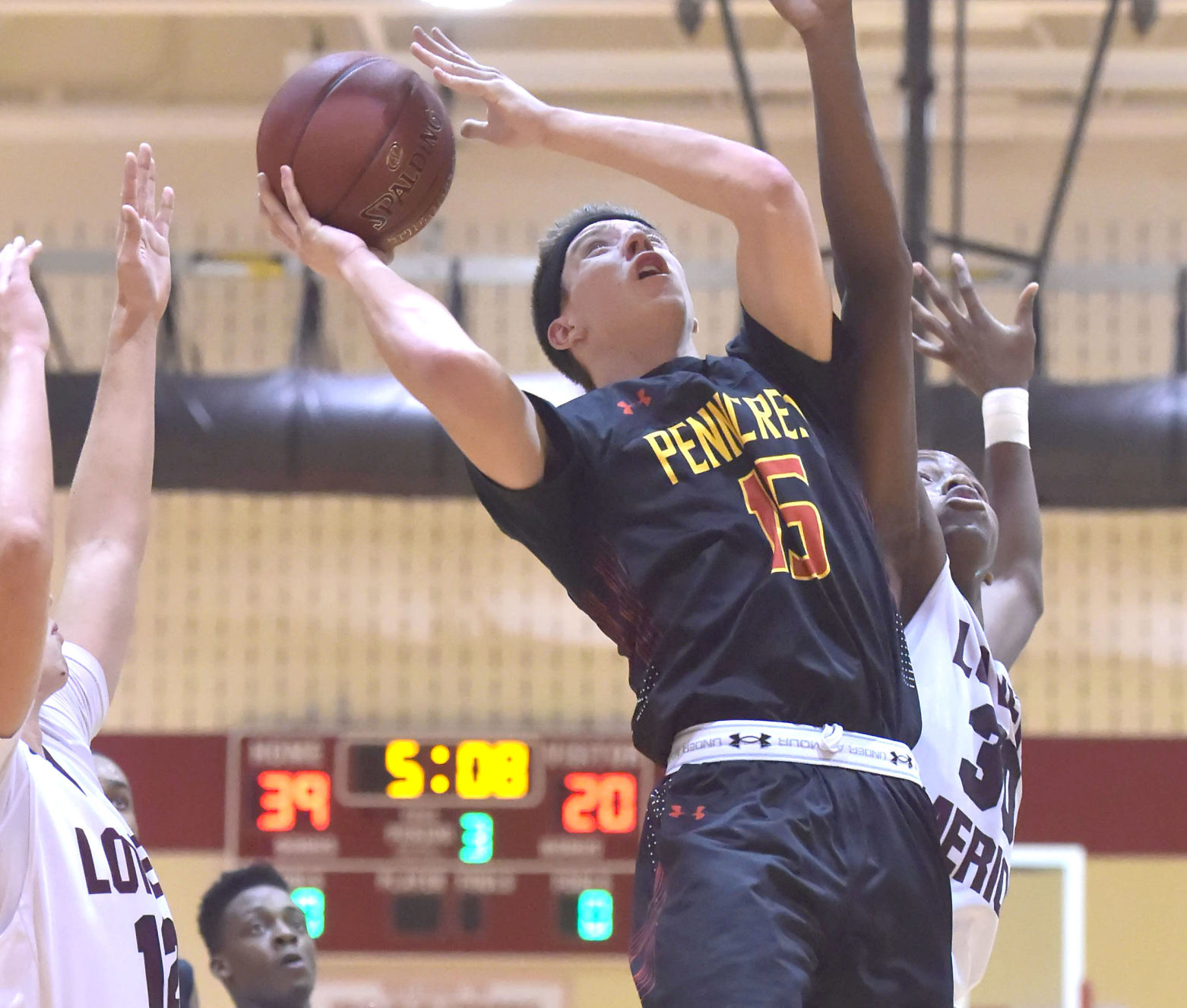 Penncrest's Matt Arbogast goes to the basket in the third quarter of the Central League final against Lower Merion Wednesday night. Arbogast scored a team-high 15 points in a 63-31 loss to the Aces. (Pete Bannan/Digital First Media)

LOWER MERION — No matter how hard Penncrest tries, there is no happy ending, just heartbreak, when it plays Lower Merion.

And so, it was here Wednesday night.

Instead of losing dramatically at the buzzer, which is where the series was stuck for the last handful of games, the Lions welcomed the final buzzer as the Aces put together a game for the ages to win their third straight Central League championship.

Lower Merion’s Julian Hairston floats to the hoop for a layup in the second quarter of the Aces’ 63-31 dismantling of Penncrest in the Central League final at Harriton Wednesday night. (Pete Bannan/Digital First Media)

What was left of the partisan crowd began singing Queen’s “We Are the Champions” with much too much time left on this school night.

“This is a three-peat and it’s amazing,” Payne said. “This group of guys, we’ve been together forever. Five freshmen made the team in freshmen year. Me, Jack Forrest, Theo Henry, Darryl Taylor and Matt O’Connor. We came a long way. I’m just happy I can celebrate this moment with them.”

It was another tough ending for the Lions and Mike Doyle, the relentless coach and social studies teacher who stopped counting victories long before he reached 200.

The Lions have run a respectable offense against man-to-man defense. They came up empty looking against the 2-3 zone Gregg Downer and the Aces switched into and out of at a dizzying pace in leading from start to finish.

“We really felt confident against them playing zone,” Doyle said. “It was like they were just hoping we missed shots. And unfortunately, we did. I had us just 1-for-18 on threes. You can’t get a worse shooting night than that. It was very disappointing. The last five times we’ve played them it’s literally been a buzzer-beater, one-possession game. We’ve been in this championship game the last three years, and we just came out flat.”

The Lions (17-6) were in a 10-0 hole before all of the spectators settled into their seats. It was Lower Merion 17, Lions senior Malcolm Williams 2, with 52 seconds left in the opening frame.

“They just outplayed us,” said senior Matt Arbogast, who led the Lions with 15 points and nine rebounds. “They just took over when they got off to that start. It wasn’t like our other games. We didn’t play well, and they came out and played great. But we still have basketball to play. We still can win the district championship.”

The Lions, the fourth seed in District 1 Class 5A, will host No. 13 Pottstown in a first-round game next Wednesday.

The Aces also have high hopes for Districts, where they are the third seed in Class 6A, largely because they’re on a roll. On offense, they adeptly spread the floor, create space and hit the open man. The 6-5 Forrest demonstrated a deadly 3-point shot and a soft touch on pick-and-rolls to the basket.

Their length in the zone defense forced the Lions into too many one-and-done possessions to stay in the game, as they failed to hit the boards hard.

Isaiah Rice for 3. Penncrest within 12. pic.twitter.com/aXVcMqTLor

Martin said it was about playing with enthusiasm and effort.

“We just wanted to come out and match their energy,” Martin said. “They’re a great team and they wanted to win, as well. I think we can go really far in districts and also make a run in states. Energy, rebounding and taking great shots, that’s what it was about today.”

The guy who blends it altogether for the Aces is Downer, who, all together now, played basketball for the Lions back in the day.

It was the 15th league title for Downer, who wasn’t the least bit distracted by anything, including a fan who politely excused himself while walking in front of the coach holding up a sign to signal an offensive set for his team. Only on the Main Line.

“This feels great,” Forrest said after cutting off his slice of the net. “Our freshman year, we wanted to get four in a row. We didn’t get it that year but we won our first one, and then the second one and then this year really dominated. We put out a 30-point victory in the championship game. We were locked in from the beginning. We beat them on buzzer beaters three of the last four times we played them so we knew we needed to come out and attack. We came out aggressive, we jumped on them and we kept it up throughout the game.

“It’s impossible to beat us when we play like this.”

The Lions can confirm that. But as Arbogast and Doyle said, they’re not through. There is basketball to be played. The Lions have been there, done that and done it well.

“The last couple years I’ve gone in that locker room and told them you get a second chance here in the districts,” Doyle said. “We’ve gone on and we’ve won the last two districts. So, the message to them is you can’t do what you did tonight. We have two home games to get back to Temple. And if we take care of business — two-time defending champs in 5A. Let’s go. And that’s where we need to be.”