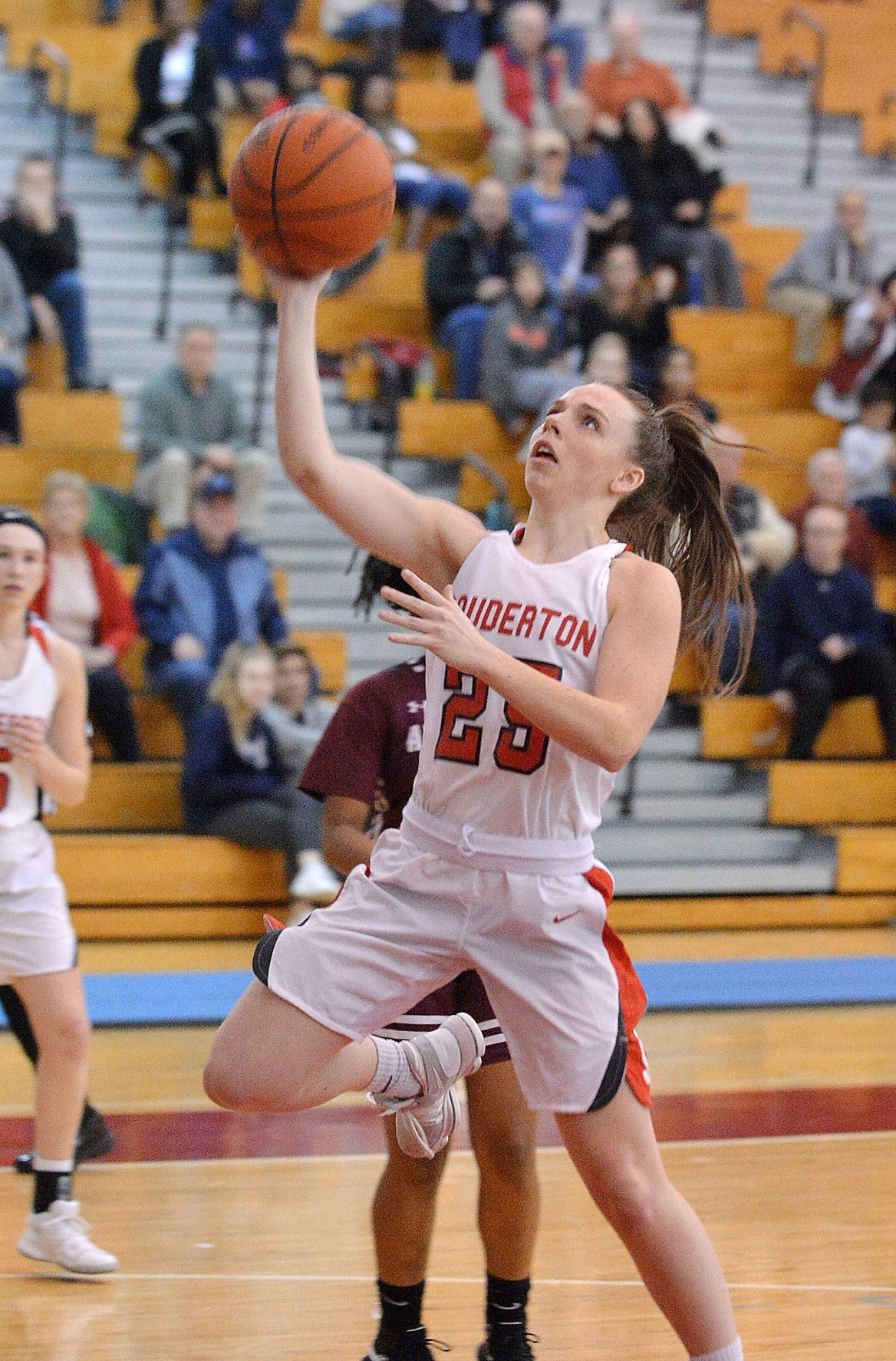 Souderton's Megan O’Donnell goes for a layup during the Indians' game against Abington on Monday, Feb. 4, 2019. (Gene Walsh/MediaNewsGroup)

Starting with Curran O’Donnell’s rebound, all five Indians touched the ball in what turned into a transition layup by Megan O’Donnell on the other end, the proverbial dagger that ended Monday’s nonconference game with Abington. The volume of points was very un-Souderton but everything else involved in the Indians winning on Monday was emblematic of this year’s team.

All five players touched the ball plenty as Souderton used a robust second half by Curran O’Donnell, Megan O’Donnell and Mikaela Reese to top the Ghosts 67-57.

“As the game is progressing and I’m looking up at our scores, it’s so well balanced,” Souderton coach Lynn Carroll said. “Four kids in double digits and I think that’s pretty much it, that’s why we’re playing as well as we’re playing and are as successful we are because they’re so unselfish.”

The final score was surprising because it’s not the type of game Souderton (18-2) usually plays. While the Indians don’t score 67 very often, they give 57 even less but Abington (17-3) did a nice job of setting the pace of play early and the Indians did well to adjust and play into it.

The two seniors – who aren’t related, by the way – combined for 32 points with Curran notching a career-best 19 points. They also both admitted they didn’t see a game with 124 combined points and 15 combined 3-pointers coming.

“I probably would have said you’re crazy,” Megan O’Donnell said. “We know Abington likes to run the scoring up, play that up-and-down full court kind of game with a lot of scoring so, that’s not too bad for us to match it.”

“Honestly, I thought this was going to be a low-scoring game as well,” Curran O’Donnell said. “I expected it to be a defensive game and it turned out to be the opposite. Coach made sure we’re not taking shots too quick and while the first cutter may be open, the second cutter would be even more open.”

Normally, a team’s home gym is supposed to help its shooting percentage. Souderton might want to have a sit-down session with its rims after the first half, where the Indians shot 4-of-13 in the first quarter and 10-of-15 at the foul line after 16 minutes.

Abington on the other hand, had no trouble scoring, especially senior center Kassondra Brown. Brown, who led all scorers with 24 points, had 17 at the half which included two makes from 3-point territory and a few more shots outside the paint.

“Part of our plan was to let Brown take them from the outside and she made us pay,” Carroll said. “That girl was determined to score in the first half. She played just great, she was dominant in the first half.”

Brown, who added 14 rebounds and two assists, has put a lot of work into expanding her range and said now, when she fires up a jumper, she expects it to be going in.

“I think I’ve always had it, but now that playoffs are starting and it’s my last year, I want to go out with a bang,” Brown said. “I’m going to do whatever I can.”

Abington’s Kassondra Brown reaches for a pass near Souderton’s Mikaela Reese during their game on Monday, Feb. 4, 2019. (Gene Walsh/MediaNews Group)

The Ghosts led 35-33 at the half with Brown and a hot-shooting Tamia Wessels leading the charge. Wessels, who recently returned from a concussion, feasted on the space Souderton had to concede on the perimeter to try and slow Brown and hit four 3-pointers on her way to 16 points.

Frustration for Abington came the same way is has in the team’s other losses. The Ghosts got in foul trouble early and part of combating it meant leaving the lane relatively open which Megan O’Donnell picked up on in the second half.

“I’d take my teammates over anybody,” Brown said. “I thought we played well the whole game. We can’t win every game. I think this is something we can learn from going into the playoffs, we can only get better.”

It was Megan O’Donnell, Souderton’s tiniest player, boldly surging into the lane and sparking her teammates with infectious energy.

“I could hear them saying ‘push her left, she wants to drive,’ so it gave me a hint to take it all the way,” O’Donnell said. “We did a really good job, and I guess I did a good job, of knowing when to push the ball and when to set up a drive or set up a play.”

GIRLS BASKETBALL: @SoudertonGBB @meganwalbrandt finds @CurranODonnell for a transition and-1 Q2 against Abington
O’Donnell hit the free throw to complete the play pic.twitter.com/az6PUYq4pC

Souderton’s response came quickly and from distance. Reese, who scored all 10 of her points in the second half, hit back-to-back threes before Curran O’Donnell capped the 9-0 spurt with a make off a pass from Megan Bealer.

“I was on the wing and Bealer was going to shoot but I yelled over to her ‘Bealer, I’m wide open,’” O’Donnell said. “Bealer is so unselfish, she gave up a shot to let me have it, so I felt like I had to make it.”

“That was the turning point in the game,” Megan O’Donnell said.

Souderton took a 51-51 tie into the final frame thanks largely to nine points in the quarter from O’Donnell. It’s been a bit of a redemption year for the senior, who saw her role limited last season while coming back from a knee injury.

One of five seniors on the team, O’Donnell has been AAU teammates with her classmates for years and best friends with them even longer, so it was tough sitting and many times just watching during last year’s magical run. Knowing she’d be good to go for her senior season, O’Donnell was ready to make the most of it.

“It’s been really rewarding just playing with my teammates who I’ve been together with for so long,” O’Donnell said. “Feeling like I’m contributing to this team is a huge accomplishment. I was definitely ready for something big to happen.”

Souderton, which came into the night No. 6 in the District 1-6A rankings, could see the No. 2 Ghosts again soon with the SOL Tournament coming up Saturday. The Indians, who won their second straight SOL Continental title last week, had a ceremonial net cutting after the win on Monday.

Curran O’Donnell scored just two points in the fourth quarter but had three of her seven rebounds in the final frame, including the board that set off the all-hands-on-ball layup to ice yet another win in what’s turning into another special year for the Indians.

“Teammwork is what we do, it’s been our motto this whole time,” Curran O’Donnell said. “We’re more about getting assists and looking for our teammates than looking out for our own good.”

After Curran O’Donnell got that rebound, she found Megan O’Donnell right away. Megan gave it back to Curran then sprinted after the play as Curran threw the ball to Reese at midcourt.

Reese fired to Bealer on the other end of the floor as O’Donnell kept running toward the basket. Bealer passed it out to Walbrandt behind the line and with Carroll signaling to take the points, Walbrandt rifled it to O’Donnell to finish the possession with a layup, the team’s 14th assist of the night.

“That was really fun,” Megan O’Donnell, who had 13 points, four assists and four steals, said. “It might have looked cool, but honestly, there was a little confusion whether we were supposed to shoot or not. For all five of us to touch the ball and get a layup, it kind of put the finishing touch on the night and was what made it so special.”