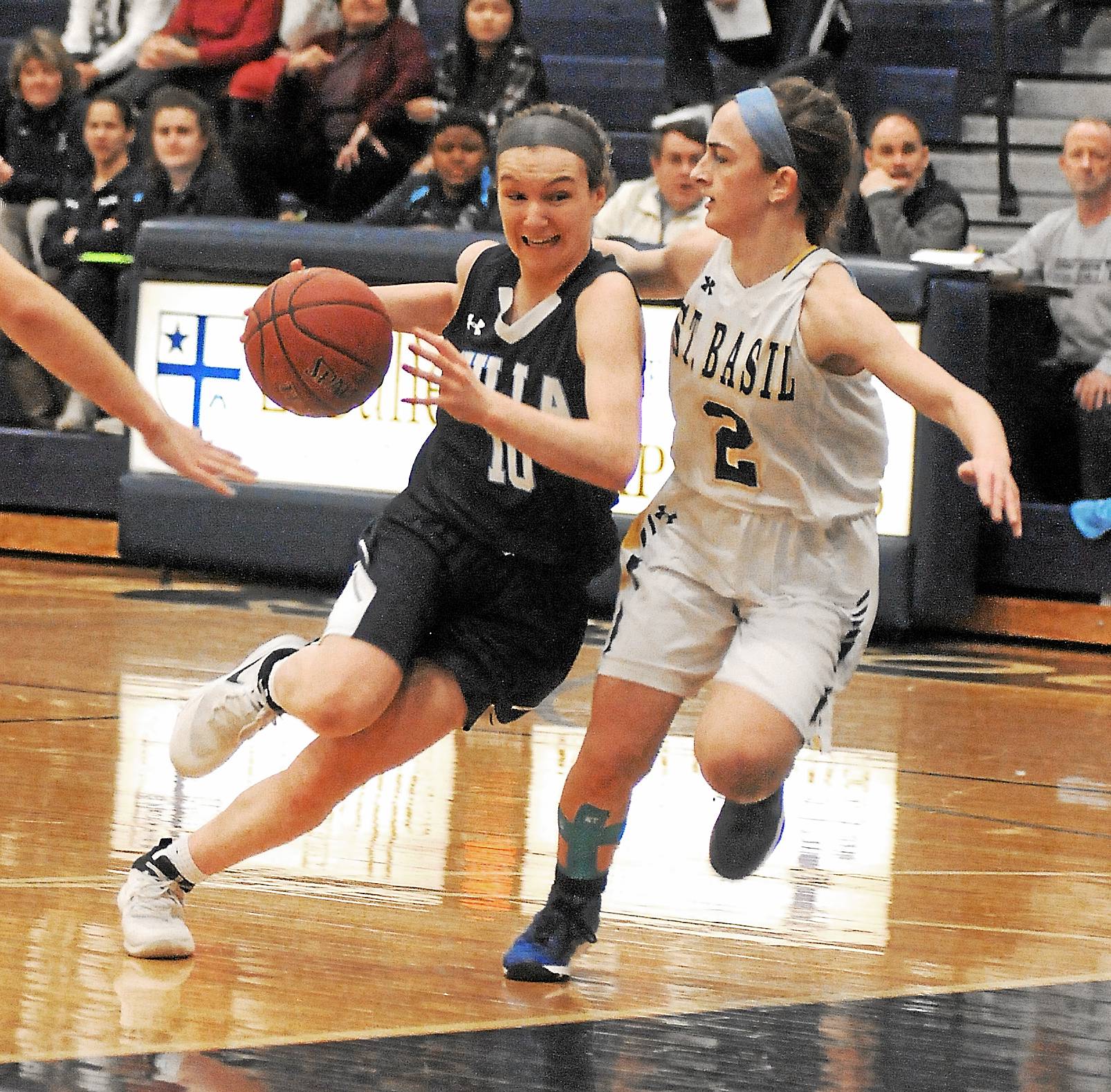 To them, the only opinions that matter are those of their teammates and coaches and they have as much faith in the duo as anyone else on the roster. They’re also used to making those same people regret that mistake once the ball goes up and the game gets underway.

The Panthers were far from their best on Saturday against Villa Maria, but St. Basil had Grant and Remolde and they came through late as the Panthers topped the visiting Hurricanes 53-43.

“Two of our starters were out with foul trouble, so we knew it was our turn to step up, score and help win the game,” Remolde said.

“We all believe in each other, even the girls coming off the bench, we’re all good enough to be here,” Grant said.

It was fitting the Panthers finished their week of exams with one last stern test against the Hurricanes, the team they’ve met in the last two AACA championship games. St. Basil just scraped by the Hurricanes, 48-46, in their first meeting back in December and to no surprise, Saturday’s game came down to the final minute.

“I feel like people do overlook us, but once we start playing,” Remolde, who led the Panthers with 13 points, said.

“They realize we’re not what we look like,” Grant, who had three rebounds, two assists and three steals in the fourth quarter finished.

Prior to the game, the Panthers listed a handful of things they absolutely couldn’t do if they planned to stay undefeated and alone in first atop the AACA.

First, they couldn’t commit too many fouls on defense. That didn’t go as planned, as two starters fouled out and the usually man-to-man reliant Panthers played much of the game in a zone.

Second, they couldn’t turn the ball over. That didn’t go as planned, as the Panthers gave up the rock 15 times, many of them leading to easy Hurricane baskets.

Third, they had to hit free throws. That didn’t go as planned either, as St. Basil shot just 16-of-27 at the foul line, although they did make them when they needed to late in the game.

“We thought the zone would give them some trouble on the smaller court and keep us out of foul trouble,” Panthers coach Terry Mancini said. “For the most part, it did and it helped us protect some players. Our kids just rose to the occasion; they knew it was a big game.”

Saturday, the Panthers needed a little from everyone and that’s just what they got. Junior Lizzie Deal had the hot hand early, scoring all eight of her points in the first quarter as the host team jumped out to a 9-0 lead and an 18-12 edge at the break.

St. Basil coach Terry Mancini noted the Hurricanes are too well-coached and too talented to get run over, and starting with senior Abby Walheim banking in a 3-pointer to end the first frame, the Hurricanes stormed right back into the game.

“This really proved to us that we need to play like every team is going to come out and beat us,” Grant said. “We don’t want to let our guard down, we want to play strong the rest of the season and not overlook anyone.”

After Shannon Remolde scored to make it 20-14, the Panthers went five minutes without a score until Casey Remolde hit a long two in the corner. In that span, Villa Maria sliced the lead down to 20-19, then after a layup by Shannon Remolde with 1:12 left in the half, got a three from Walheim and a layup from Myla Warley at the horn to take a 25-24 lead to the break.

“We knew they’d come out strong, so we just needed to keep our composure,” Grant said. “When we came out in the second half, we ran our offense, took good shots and played strong on defense.”

Denae Carter was next up to carry the Panthers. The sophomore, who found it tough going most of the afternoon against Villa Maria’s size and long arms in the paint, scored six straight for her team to put the Panthers back on top 30-27.

Carter’s third bucket kicked off an 8-0 capped when Casey Remolde went coast-to-coast for a 36-27 advantage.

Up 36-30 to start the final frame, it was the tandem of Grant and Shannon Remolde that carried the Panthers home. Both in their first season as varsity starters, the two guards were just tenacious at the top of St. Basil’s 2-3 zone and didn’t relent even as Carter and Deal eventually fouled out.

“It was a big adjustment, but we’re a defensive-minded team so any defense we want to do, we can make it work,” Remolde said. “We’ve played together our whole lives. We knew the shooters up top, we had to cover them the whole time so we just did that.”

“We knew we would give up more offensive rebounds, so we had to keep them in front of us and not get to the basket,” Grant said. “If they put the ball low, I’m going to grab it and try to tie it up. I did have to be careful not to foul though.”

The pair either scored or assisted all but four of the Panthers’ 17 fourth quarter points. Grant assisted Remolde, then Riley Scannell and finally got a put-back of a Remolde miss for a frame-opening 6-0 run with 6:44 to go.

Grant’s last hoop was also the last field goal the Panthers made in the game and Villa Maria had a last big run left in it. Spurred by their excellent forward Paige Lauder, with help from Maddy Ryan, the Hurricanes ripped off a 12-2 run and cut St. Basil’s lead down to 44-40 with 2:26 left.

Lauder led all scorers with 19 points while Walheim notched 15. Casey Remolde and Carter each scored 10 while Deal and Grant both notched eight.

“Don’t think about it, take your time and just shoot,” Remolde said.

Walheim hit a three with 38 seconds left, cutting the lead down to 48-43 before Grant drew a foul. The junior point guard canned the first with 32 seconds left, then missed the second only to grab her own miss and cycle it back out to Casey Remolde.

Grant allowed that Saturday’s win opens the door for the Panthers to finish the regular season undefeated, but only if they keep themselves from looking that far ahead.

“I think this game really helps us going forward,” Grant said. “To know even if we’re losing or if we’re not playing well, we don’t have to worry about it and just keep playing strong.”