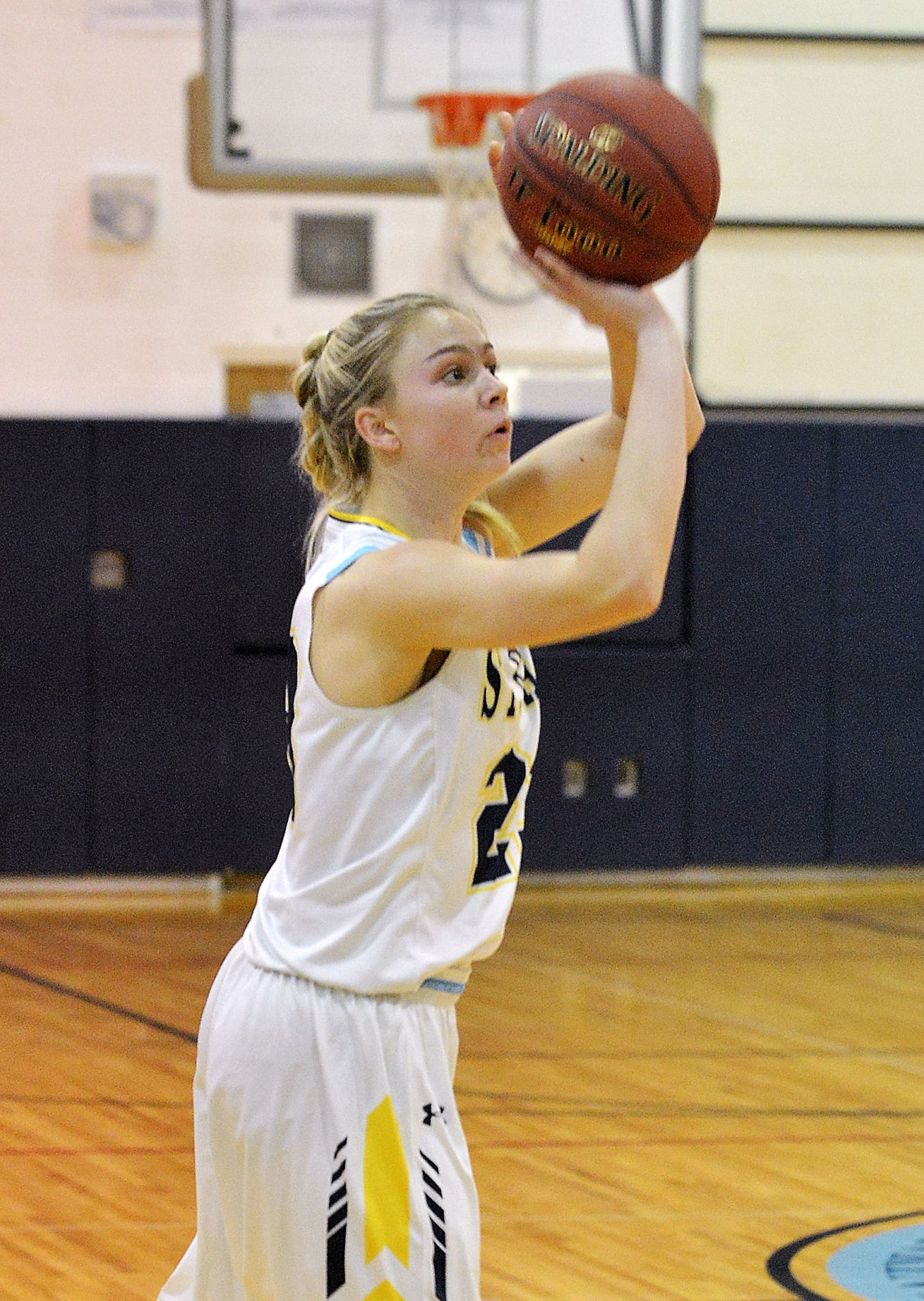 FLOURTOWN >> In Casey Remolde’s family, the message was always that defense wins games and good offense comes from good defense.

It’s a similar mantra that her other family, the Saint Basil Academy girls basketball team, is built on, so it wasn’t a surprise that Remolde found a place pretty quickly with the Panthers. Remolde started out as a defensive stopper and occasional scorer, but has blossomed into a total two-way player the last two years.

Thursday, she put her prowess on both ends of the court on display by scoring her 1,000th point and playing lockdown defense as Saint Basil topped Mount Saint Joseph 50-23, improving to 16-0 on the season.

“It was really nice for me to hit that accomplishment just because I’ve seen so many people I look up to be able to do it,” Remolde said. “To be surrounded by a lot of friends, family and the girls on my team who I also consider to be family made it even better.”

Defense has always come easily for Remolde, who stands about 5-foot-10. From playing against her sisters and brother at home, to youth leagues and AAU, the senior wing has always put defense first and its endeared her to plenty of teammates and coaches along the way.

Remolde said her dad did a really good of keeping her out of the loop for how many points away she was from the 1,000-point mark until right before Thursday’s contest. Needing 13, she came out aggressive and looking for her shot, although that was part of the plan anyway.

“That was definitely part of it, but I was more focused on getting an early lead,” Remolde said. “Our league has kind of been a little unpredictable this year and we know everyone is coming for us so we came out strong and had a good start to the game.”

Remolde finished with 18 points, netting her 1,000th and 1,001st points on a layup off a pass from Lizzie Deal with 5:51 left in the second quarter. The senior, who scored nine in the first quarter, also knew she had a significant job defensively guarding the Mount’s Grace Niekelski.

With Remolde on Niekelski and Kelly Grant covering Magic guard Lauren Vesey, the Mount had a tough time sustaining its offense after a pretty solid start. Up 13-8 after the first quarter, St Basil got five points from Remolde as part of a 6-0 run to open the second quarter.

In two meetings with the Magic this season, the Panthers have proven to be a tough matchup.

Niekelski led the Mount with 10 points but had practically every shot contested as St Basil played a very disruptive brand of defense. Thursday’s result was a setback for a Magic team that had seemed to find a stride late last week.

“We have a lot of sets where we can get our first two options open but they do a really good job of switching out and understanding what we’re trying to do,” Roynan said. “They get out on it and take it away from us. We need our other players to step up a little bit more and they’re getting there, little by little.”

After her sophomore year, Remolde made a decision to give up playing soccer and focus solely on basketball. The senior said it was a tough decision, missing the chance to play with older sister Cheryl and younger sister Shannon in last year’s run to the state final, but one she felt was right for her.

St Basil coach Terry Mancini knows it was a difficult sacrifice for Remolde to make, but feels the senior was able to maximize her fitness and raise her game a level by doing so.

“No one works as hard as her and tell the kids all the time, hard work is always rewarded and there’s a reason it seems like your best players are always your hardest workers,” Mancini said. “She’s our captain and sets a good example. She doesn’t take a day off and she comes to practice the way she plays in games.”

St Basil, which took a 23-13 lead to the half, started the third quarter on a roll with a 12-0 run. Remolde scored two baskets in the run and assisted two to her younger sister Shannon, a sophomore starter at guard. An all-state player last year, Casey committed to Kutztown over the high school offseason, finding a similar family-like bond there and becoming the latest St Basil player to move on to the PSAC program.

“She’s a pit bull, we ask her to guard the other team’s best girl and she cherishes that role,” Mancini said. “She’s always been a great defender but on the offensive side, she got herself in great shape and was rewarded with a scholarship to college. You can’t say enough good things about her and now we’re watching her sister Shannon and she’s starting to follow in those footsteps.”

This St Basil group is especially close. Most of them play for the same AAU program, several have had older siblings go through the program and they’ve practically grown up playing basketball together. As long as he’s been at St Basil, Mancini’s tried to instill that kind of family aura and it hasn’t been difficult with this team.

That bond proved itself in what’s been an emotionally taxing week for Mancini. His wife Kim passed away Monday and even with the players working through mid-term exams all week, they’ve given him a much-needed lift.

Prior to Thursday’s game, the Mount held a moment of silence in Kim Mancini’s honor.

“I didn’t want it to be a distraction and I told them that before Tuesday’s game but they’ve been so good for me,” Mancini said. “It’s the one outlet I’ve had through all this. They had exams too, we cut practice time down and they just knew what to do.”

Mount Saint Joseph takes on a very solid Bonner-Prendie team out of the PCL on Saturday.

Saturday ends a long week for the Panthers as they host AACA rival Villa Maria at 2:30pm. While St Basil edged the Hurricanes 48-46 earlier this season, Remolde noted Villa won in the Panthers’ gym last year and they’ll be eager for revenge again this weekend.

Remolde was the hero in the first meeting, scoring a late bucket to put her team up and the Panthers will no doubt look to their senior captain again on Saturday.

“I’ve been with them the whole time, through the good games and the bad, so to hit this accomplishment with them really made it that much better over all,” Remolde said.