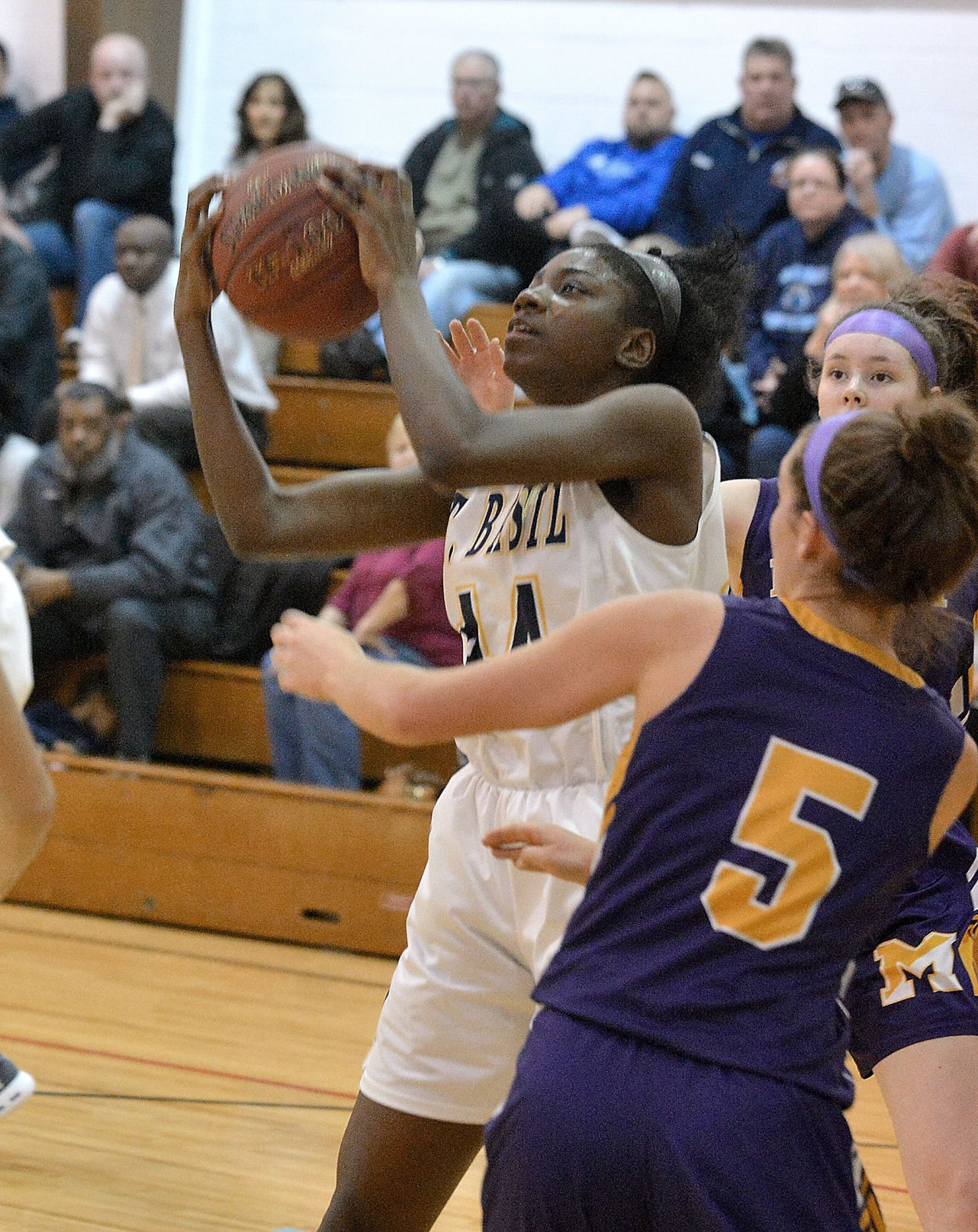 The Panthers authored some impressive early season wins with their defense prior to heading down to North Carolina last week for a holiday tournament. There, they put the clamps on everyone, won a tournament title and made sure to check the defense with the rest of their bags for the trip back.

A robust defense effort helped the Panthers improve to 10-0 Thursday as they locked down visiting Mount Saint Joseph 55-25 in an AACA contest back in their own gym.

“Coming back from the trip, we’d won three games straight in North Carolina so we wanted to come out strong,” Saint Basil senior Casey Remolde said. “It was a big step for us to come back, start with a home game and get the season rolling again. We wanted to start with a win to keep us going.”

Speaking of the Panthers’ gym, its narrow width seems like it would be a huge help to a team that wants to play aggressive defense. While it does usually catch opponents for a turnover or two while they adjust to the confined sidelines, the Panthers actually think their floor doesn’t offer them much help.

Junior guard Kelly Grant explained they’re at least used to it because they practice in there, but this year’s team likes when it plays on wider and more spaced out courts.

Grant, who scored five points, played an instrumental role defensively. While not the biggest player, Grant brings plenty of fire to her defensive effort and always seems to have her hands involved on a deflection, steal or a tie-up.

She spent most of her time on the floor checking Mount junior Lauren Vesey, who the Magic run a lot of their offense through and helped hold the Mount guard without a point.

“I just had to try to keep her in front of me and not let her get all the way to the basket,” Grant said. “We knew who their top players were, so we felt if we guarded them and didn’t let them score, our defense would generate our offense.”

The Panthers, who are the top team in the District 1-3A power rankings at the moment, are yielding just 25.4 points per game defensively following Thursday’s win. Casey Remolde is an excellent individual defender, as are a couple of other Panthers players but their strength is in their team defense.

Early in the fourth quarter, Mount’s Taylor Sistrunk found herself facing a moving wall of white jerseys, with at least three Saint Basil players preventing her from dribbling anywhere but side to side. Sophomore Shannon Remolde noted they want to be physical, and sometimes may foul a bit too much, but the Panthers blend it with quickness and length that help make them difficult to break down.

“We’re helping out a lot,” Shannon Remolde said. “If a player on the other team beats one of us, someone else will always be there to stop them.”

The Magic, who haven’t found a consistency on the offensive end yet this season, saw plenty of that on Thursday. Mount didn’t get its first points until midway through the first quarter and it seemed like every screen or cut to try and open up a play was met by a rotating Saint Basil helper.

“We got some shots we wanted and didn’t make them, but credit them, their defense is really good,” Mount coach Jim Roynan said. “They pressure the ball, they take away cuts. We have to be better, when we play a good defensive team like that, we have to execute better.”

Roynan noted the score doesn’t indicate it, but he sees a team almost daily at practice that plays like it’s on par with Saint Basil or any of the other strong teams the Magic have played so far. The challenge has been transplanting that effort on the practice floor out into a game scenario.

“It always comes down to execution,” Roynan said. “Basil took a good job of taking things away, so you have to adjust. I truly believe we’re far better than we showed today, I see it in practice every day and I see them execute fairly often. We have to get them to believe they can do it in a game situation and again, that comes back on the coaches.”

Saint Basil held the Mount to less than 10 points in every quarter while using a mixture of defensive stops and just solid offense to create their scoring. Casey Remolde led the Panthers with 15, Shannon Remolde had 14 and Denae Carter scored 13 points with 21 rebounds in a balanced effort.

The Remolde sisters had things really working in the second quarter, combining for 15 of the team’s 17 points, with Shannon assisting two of Casey’s makes in the frame. Their effort helped Saint Basil take a 30-12 lead at the half.

“We know what the other is thinking sometimes,” Casey Remolde said. “We make eye contact and just know what to do because we’ve been playing together for so long.”

This year’s group, which has just two seniors, already had a good rapport on the court coming into the season, but it got even stronger on their holiday trip.

“We ran our offense well and worked together as a team, so we bonded really well while we were down there,” Shannon Remolde said. “It was good for the team chemistry.”

While they’re 10-0, Casey Remolde noted the Panthers have plenty of tough games left and several of those coming away from home, starting with a Saturday trek to CB East. At least they know their defense will travel and there’s still a lot of season left, so this group isn’t satisfied yet.

“We’re just working to get better every day,” Grant said.

“What we’ve done so far is great, but we want to keep moving forward,” Casey Remolde added. “All we want is to keep accomplishing more than we have so far.”