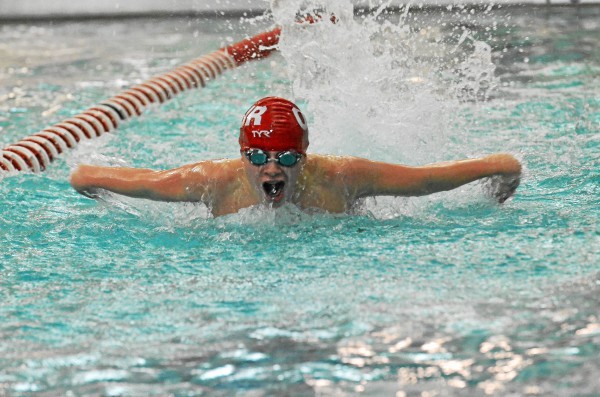 Outlook: The Bears’ kryptonite over the last two seasons has been Owen J. Roberts — the league’s perennial power which has captured four straight undefeated regular season titles. Benner, an All-Area First Team selection in 2017-18, returns and will lead a team that’s loaded on the top end. Boyertown returns four swimmers who swam individual events at last year’s District 1 Championships though they’ll need to replace Josh Boyer and Mason Kennedy, both lost to graduation from last season.

Outlook: The Blazers first run at a conference schedule didn’t go so bad last season with wins over Exeter, Twin Valley and Wyomissing along the way. Guiliano returns after being the team’s lone representative at the District 3 championships where he finished sixth overall in the 200 IM and eventually went on to swim at the PIAA Championships. Now comes the hard part: Boone will need to replace three seniors from last year’s team including Joe Guiliano, David Ahakinian and Zach Schnabel. They’ll look to build up their depth as the season goes on this winter.

Outlook: Mestre, a University of Florida commit, will bring must-see action every time he hits the water. The senior already owns the 500 free school record and has his sights set on setting the mark in the 100 fly as well. The Blues return every member of their 200 and 400 free relays, which medaled at Easterns last season, leading The Hill to a ninth overall finish. “I am very excited for this season because we have a lot of solid depth. We have some strong PGs and freshmen this year who will bolster our rosters. We’re hoping to place higher at Easterns at the end of the season.”

Outlook: The Warriors return four district qualifiers from last year’s team — Groff, Hendick, Zeng and Caplan — though will have a major gap to fill following the graduation of Michael Palumbo. Stevens is hopeful with seven incoming swimmers bringing plenty of optimism through the ranks. “With some new talent added to the team, the boys are looking to have more qualify for districts this year,” said Stevens. “This season we have a large senior class who continue to show leadership with the growing team.”

Outlook: The Wildcats hadn’t lost a meet since the 2013-2014 season and were 44-0-1 in competition since before Tuesday’s season-opening loss against Upper Merion followed by a loss to Spring-Ford Thursday. This season could be one of the most challenging in a while with OJR needing to replace nine talented seniors from last year’s team and returning only two individual district qualifiers in Fink and Kasnzay. Although their numbers in term of experience are down, they’ve always got depth on their side with 18 listed on the roster. “The group is energetic and supportive of each other, and we are excited for many of the athletes as they take on new events and challenges this season,” said Bott. “There is a strong desire to improve and be the best they can be, and we look forward to seeing the end results.”

Outlook: Derrick and Kell return after swimming legs of the Vikings’ 200 medley relay at districts last season while Keenan, Dylan Alexander, Ethan Hinz and Evan Brzoska all swam in individual events at districts. They’ll lead a team loaded with upperclassmen, though the Vikings will look to move on following the graduation of state qualifier Matt Marsh. “We have a strong returning core group of swimmers and many new additions to fill in the gaps left by our graduated seniors,” said Zackowski.

Outlook: The Phantoms took some major steps last season, earning the most wins in program history and sending the program’s first relay to districts since making the jump from Class AA up to Class AAA in 2015. The best part? All four from that 200 medley relay are back again this season as well as individual district qualifiers Schwartz, Hussin and Pappas. That gives Weinstein plenty of confidence heading into this winter season. “We return a hungry squad eager to return to district’s and improve on last year’s best ever season record,” said Weinstein. “With an enormous senior class, the Phantoms hope to compete for the PAC championship.”

Outlook: The Golden Panthers swam time only events last season where several newcomers and inexperienced swimmers competed at the varsity level for the first time. Thomas hopes that experience will go a long way this winter. “As a general outlook on the season moving into the PAC this year will be a real eye opener as our team is  still in its infancy,” she said. “There will be a few key meets where they’re able to show their talents and really push themselves this season as I predict a lot of personal records and school records will be broken.”

Outlook: The numbers game has never been favorable to Pottsgrove, which enters the 2018-2019 season having lost 14 straight meets dating back to the 2016-2017 season. Gone from last year’s team is reigning All-Area Boys Swimmer of the Year Patrick Agnew — who claimed a pair of medals at the PIAA-AA Championships last season — along with Eli Eisenhower.

Outlook: The Rams will have some major holes to fill following the departure of District One qualifiers Matt Skilton and Carson Hilliard along with PIAA qualifier Carson Huff (back), though Agnew still holds out hope for Spring-Ford, which has sent a relay to districts each of the last three seasons. “Losing Matt and the two Carsons is a huge loss for the boys,” said Agnew. “We’ll be a good young team looking to finish in the top half of the PAC.”

Outlook: The Vikings opened up the 2018-2019 season with a bang last Tuesday, handing perennial power Owen J. Roberts its first meet loss since the 2013-2014 season. McNally and Besz return to lead a deep Upper Merion team that sent five individuals and three relays to the District One AAA Championship. The biggest challenge will be replacing Justin Ardamoy, lost to graduation, though Lemishko and Hoy were solid contributors last season.

Outlook: With the biggest boys team he’s had during his time with the Tribe, Kalnoski and Upper Perk will make the transition from Class AA to the more challenging AAA this winter. “Our goal is to get swimmers qualified for AAA Districts,” he said. “In spite of the loss of three talented seniors from last year (Cameron Junk, Dan Miller, Joel Williams), we will continue to try and improve in the PAC dual meets. Kyle Kovalenko returns as the team’s most decorated swimmer after finishing sixth overall in last season’s PIAA-AA 100 breast. He’s the lone returner from the Indians’ 200 medley relay, which also swam at states.