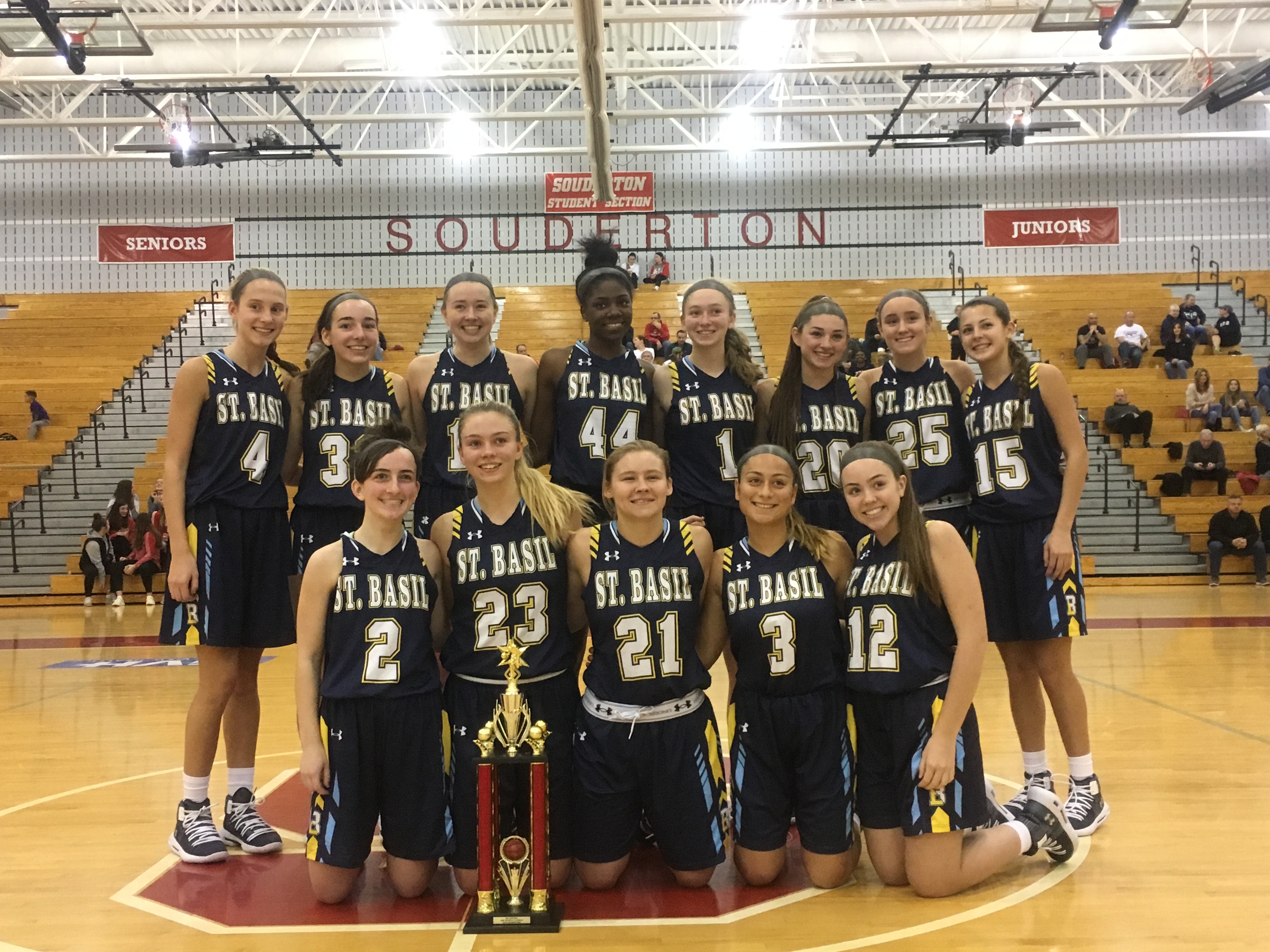 FRANCONIA >> Defense in basketball is much easier when everyone on the floor is committed to the cause.

It may have been the second game of the season, but the St. Basil girls basketball team looked in postseason form defensively Saturday afternoon against Souderton. The Panthers were aggressive, ambitious and quick and it turned into a long and frustrating second half for Souderton.

St. Basil held the Indians to just six second half points without a made field goal as it topped the hosts 44-26 in the championship game of the Jim Church Classic.

“Defense is all heart,” St. Basil coach Terry Mancini said. “It’s both talent and how we teach our defense. They’re smart players so that’s where all the ability steps up and helps us.”

St. Basil, which pocketed 18 team steals on Friday night, kept its hands in passing lanes to start Saturday’s title tilt and finished with 13 more steals at the end of the contest. The Panthers forced Souderton into more turnovers (eight) than points (seven) in the first quarter as they took away options and then got in the right place to cause a turnover.

Sophomore Denae Carter, the tournament MVP, was really good at causing havoc on the defensive end with four steals and two blocks. With her teammates covering the perimeter options well, Carter was able to play entry passes into the post then use her athleticism to get the ball right up the floor.

“She changes everything on both ends of the court,” Souderton coach Lynn Carroll said. “She’s fast, she’s long, she can jump. She made things really, really difficult on us and it was near-impossible for us to attack the basket with her there.”

St. Basil’s defensive effort started with Souderton senior Megan Bealer. The senior sharpshooter had a great start on Friday night, which was the last thing the Panthers wanted to see on Saturday, so they stuck their best defender in Casey Remolde on Bealer.

Remolde, a second team all-state pick last year, did a good job of keeping the ball out of Bealer’s hands for almost the first half. The senior, a Kutztown recruit, credited her teammates for helping on screens and communicating, but she knew the importance of her assignment.

“I knew a lot of their offense was off of her shooting and off her getting everybody started,” Remolde said. “I knew if I could help shut her down, everyone else did a great job too helping off screens, then we’d really be able to shut this team down together.”

After going down 11-2 to start the game, the Indians calmed down with Megan and Curran O’Donnell leading the way. The senior twins each scored five first half points and each assisted two baskets, combining with five points from Megan Walbrandt to claw back into the game.

Bealer only got one look in the first half, but she made it count. Left with a little bit of room, the guard canned a 3-pointer with 1:14 left in the second quarter, cutting the Panthers’ lead to 22-20 going into the half.

It was also the last basket the Indians would make in the game.

“We stayed in it in the first half because our kids were hitting big shots,” Carroll said. “We didn’t take many shots in the first half and we made a good amount of them. I think we learned a lot about ourselves today, I think we’re going to continue to learn as this month goes on and being a relatively new team.”

Another of Mancini’s mantras is winning the first three minutes of the second half, which his team did Saturday. St. Basil scored six points and had caused three turnovers in the opening five minutes of the third as Carter and Shannon Remolde took over the offense in the third, combining for all 11 Panthers points in the frame.

“A lot was due to our rotations,” Carter said. “Once someone dropped back, it was easy to find the open spot and the open pass and jump out on it. We were kind of keying on it, we had the opposite girl on weakside help just in case and with both sides helping, it made it easier for me to get to the pass.”

All six of Souderton’s second half points came at the line and the Indians didn’t score in the second half until Mikaela Reese hit a pair at the line with 1:42 left in the third to end an 11-0 St. Basil run.

Carter and Remolde said that playing defense is a point of pride for everyone on the Panthers roster and Remolde added that because most of them have been teammates for a long time, it comes a little easier. Carter pointed out that the team’s smaller players like guard Kelly Grant were just as involved as anyone else, especially grabbing loose balls and forcing tie-ups and changes in possession arrows.

“We’re all so comfortable with each other that we know our strengths and weaknesses,” Carter said. “We know the game really well, so it’s easy to find the open pass or the open look. Defense is the key in the game, if you can stop their offense, then you can get any shot you want.”

Carroll felt that a lot of the turnovers her team committed Saturday will get fixed with more time in the gym and she liked the way some of her players tried to impose themselves on the game.

St. Basil, the two-time defending AACA champions, opens up league play on Monday so Carter and Remolde were glad they could go into it coming off back-to-back strong performances.

“If we come out strong and get a big lead, that gets everything going,” Remolde said. “Starting well on defense opens things up later in the game. The first few minutes are always the most important to get a jump start on the other team.”